The Day After: Survival at Sprint Center 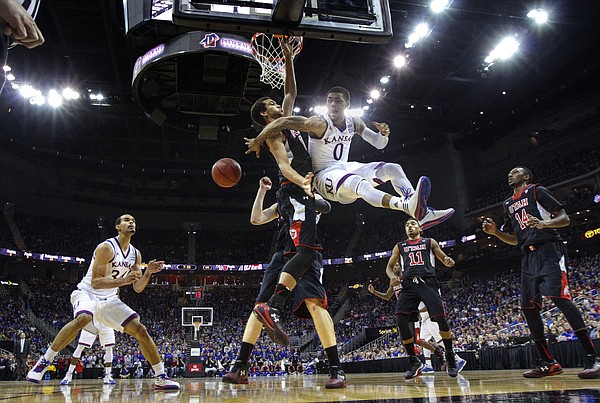 Say what you will about the sluggish second half, the Kansas University men's basketball team on Saturday at Sprint Center again found a way to win a grinder, 63-60 over No. 13 Utah.

The game featured one of KU's best halves of the season and also one of its worst, as the Jayhawks (8-1) raced out to a 42-21 lead behind a strong first half and then saw that lead erased when a less-than-stellar second half.

Hot free throw shooting, more solid three-point shooting and that hard-to-describe quality that allows this team to scratch out a victory in the waning minutes all benefited the Jayhawks on Saturday in a game that featured a couple of teams that played incredibly hard but at different times.

KU was lights out in the first half. After struggling to get the offense going, the Jayhawks started making shots and never let their defense slip, suffocating the Utes into 35 percent first-half shooting and 10 turnovers.

The two teams flipped roles in the second half, when KU shot just 26 percent and committed seven turnovers, which allowed the Utes to climb all the way back into it and set up the dramatic finish. 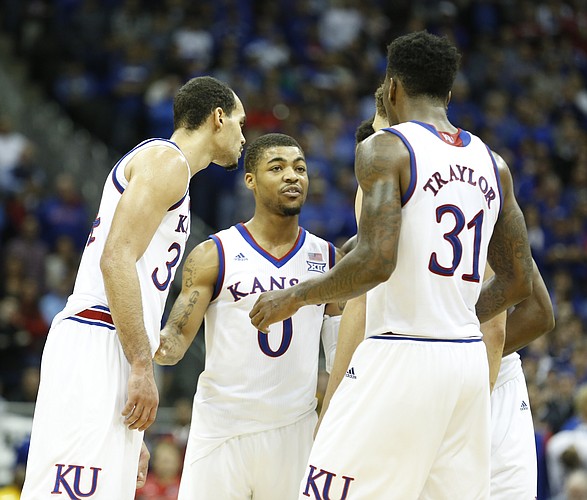 Kansas guard Frank Mason III (0) huddles the Jayhawks before free throw attempts by Brannen Greene with seconds to play during the second half on Saturday, Dec. 13, 2014 at Sprint Center by Nick Krug

Heading into the opening game of the Orlando Classic, the Jayhawks knew that they were in for a rough stretch of games. Rather than giving in to the difficulty of the schedule or leaning on their youth and inexperience as an excuse, the Jayhawks pulled together, played tough and won six straight games in the face of just about every kind of adversity you could imagine. This team is still a work in progress and there remains a lot of room for improvement, but what they've been able to do during the past few weeks makes you believe that these guys are ready to defend their 10 consecutive Big 12 titles and go hunting for No. 11.

1 – For the second game in a row, freshman Kelly Oubre looked comfortable and made some consistent positive contributions. Oubre scored nine points in 17 minutes and hit all five of his free throw attempts while also grabbing three rebounds. It's not the numbers that are worth noting, rather the way he looks a look more sure of himself and confident in what he's doing. 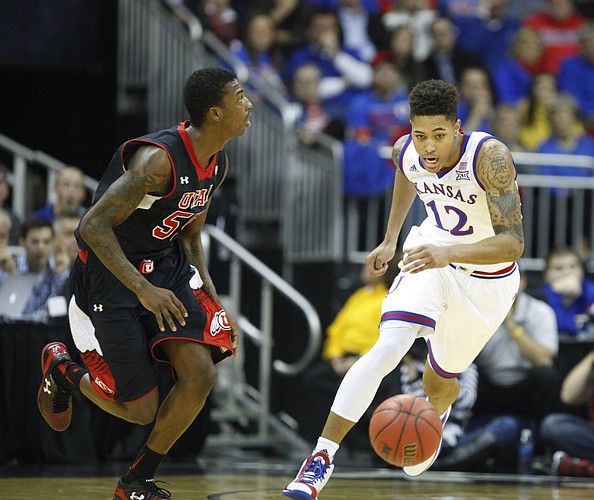 Kansas guard Kelly Oubre Jr. (12) eyes the ball as he defends Utah guard Delon Wright (55) during the first half on Saturday, Dec. 13, 2014 at Sprint Center by Nick Krug

2 – One of these days, KU's free throw shooting will just be a given and won't qualify as a reason to smile. Today is not that day. The Jayhawks drained 21 of 23 free throws, including all 10 they attempted in the first half and needed just about every one of them to hold off the Utes. Brannen Greene, who stepped into the starting lineup for Sviatoslav Mykhailiuk but didn't do much most of the game, knocked down four in a row in the final minute to help seal the victory. As a team, KU hit all eight of its free throw attempts in the final five minutes.

Kansas forward Jamari Traylor (31) gets inside for a bucket and a foul from Utah forward Jakob Poeltl (42) during the second half on Saturday, Dec. 13, 2014 at Sprint Center by Nick Krug

3 – Jamari Traylor came back with a purpose. Having a good game is no reason to excuse an arrest, but it was clear from the way he played that Traylor was trying to make up for his mistake. He still had a couple of inexplicable mistakes — a terrible pass here, a turnover there — but he hit 4 of 8 shots, all 5 of his free throws and finished with 13 points and 5 boards. The most impressive thing about Traylor's play to me was that he looked relaxed.

1 – KU's second-half offense was awful. Not only did the Jayhawks shoot just 26 percent and make just six field goals, but there were way too many one-on-five possessions, when the ball didn't move and the Jayhawks just threw up some wild shot or turned it over. With several guys on the roster feeling comfortable and looking locked in from three-point range of late, better ball movement and less pounding could lead to open three-pointers and better possessions. In short, pretty much what you saw in the first half. 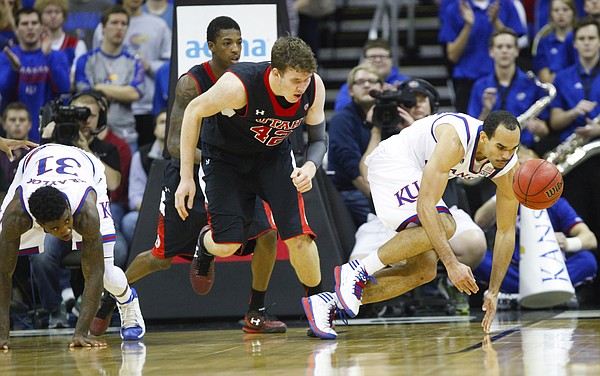 Kansas forward Perry Ellis (34) chases down a loose ball lost by Utah forward Jakob Poeltl (42) during the second half on Saturday, Dec. 13, 2014 at Sprint Center by Nick Krug

2 – Landen Lucas' time in the starting lineup is probably pretty close to ending. Lucas missed his only two shot attempts — showing once again that he lacks the strength and explosion to finish at the rim — and the only other statistic he recorded was his two turnovers. No rebounds. No assists. No blocks. No free throws. Lucas has done an admirable job during the first nine games, but he's clearly not the guy the Jayhawks need out there and it seems the coaching staff gets that, as evident by his seven minutes against Utah. 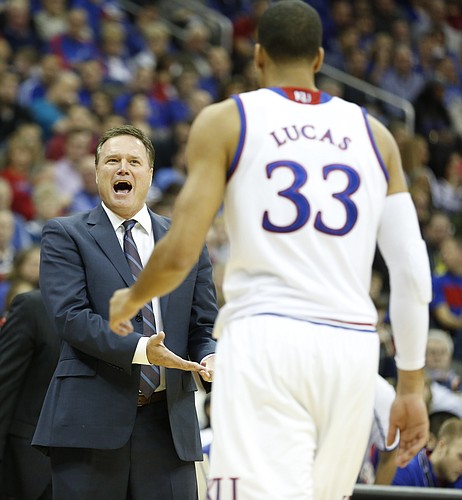 Kansas head coach Bill Self questions a play by forward Landen Lucas during the second half on Saturday, Dec. 13, 2014 at Sprint Center by Nick Krug

3 – Remember that shoulder issue that once plagued freshman Devonte' Graham? It never really materialized into something to worry about, but the point guard's latest injury is. Graham is expected to miss four weeks — perhaps longer — with a toe injury and the news comes at the worst time. Graham played very good basketball in his past two games and really looked to be getting comfortable out there, both with his role on the team and with the jump to college basketball as a whole. His absence will be a blow to this team.

• Was the fourth-straight win for KU by six points or fewer.

• Made the Jayhawks 8-1 for the second time in the last three seasons and the sixth time in Bill Self's 12 seasons at Kansas.

• Improved Kansas’ lead in the all-time series to 2-0.

• Improved KU's record to 5-1 in games away from Allen Fieldhouse this season.

The Jayhawks will get a break from their rough and rugged schedule, as they'll be off all week until next Saturday's 2 p.m. home game against Lafayette. 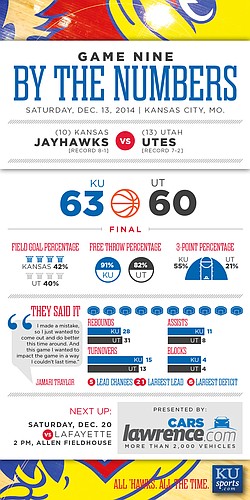 The development of this team has been interesting to watch. They really know how to blow leads but there is something to be said for being able to grind out a win. This is a very young team and should get better. Last year's team seemed to turn up the performance once conference play began. I think the conference is tougher this year and hope this young team can do the same. Maybe I am still in shock after the Kentucky game, but I doubt that most would consider us to be the best team in the conference going into conference play. There does not appear to be an easy victory within the conference.

Brett TCU's SOS is ranked 297th... I get that their coach wanted to win some games to build up their confidence, that is how you rebuild a team that is so far down, but Maybe we should see how they do against WVU early in conference before we welcome them all the way back.

Is there a name for the Kansas offense? How about upchuck?

I prefer to call our Offense a Crimson and Blue Christmas. We like to give away the ball, give away possessions, and give away leads, due to the Holiday Spirit we are all in this wonderful time of year.

God bless Us, Every One!

13 turnovers per game. That's not as good as we'd like it, but it is better than Texas and the same as Connecticut, We take care of the unforced turnovers, we'll be alright.

When the season started we only had 1/4th of the offense installed with the young guys. Growing pains aren't anything new. I'm really surprised with how obtuse you are. You claim to be knowledgeable.

Nice pix of Mason with the wrap-around highlight pass...Frank is becoming a good PG. Love his tight handles, the best since Sherron, possibly better because he is bit quicker. Frank's HUGE improvement in his 3pt% is a big boost to this team.

The reason Frank is a better PG for this team (compared to Frankamp), is the pace at which he plays, and the top gear he has. So, if he continues to improve his decisions on when to attack, he will be nearly unstoppable. He is a lot smarter about what to do in the 'trees' now, ever since the KY game. I'll give him a mistake or two per game, as pressuring-type guards like him, Sherron, Tyshawn is simply a different style, and as long as their equation is a 'net positive', and they also get the 'W', that is really all that matters. That's the difference between speed at PG vs. Connor or Brady running point--> more versatility. I like Self's attack-philosophy, and Frank is his #1 soldier.

Frank is a bulldog. I freaking love how he plays the game. He is the toughest kid on this team and it's not close.

What is the chance that KU could land Semi Ojeleye?

Do we know why he does not want to play at Duke?

It's believed that he's leaving Duke because he's not getting enough playing time. Very similar to the Frankamp situation as I understand it. I hardly think Kansas is going to satisfy his playing time wants.

The longer Graham is out the harder the season will be for Frank. Greene and Wayne are going to have to spell him, he cannot go 38 mins. a game when we get to conference play. He will not be able to recover and his play could suffer.

sigh 4ish - It would be nice to see Svi play better. He looks like he has hit a wall. We need his mis match on the floor to help with scoring.

sigh 5ish - I was really thinking Hunter was going to help us in the post more. Maybe 5 points, 5 rebounds, 2.5 blocks for 15 mins of PT. That is not even his average at 2 years at ARK.

My biggest sigh is Lucas. He seemed to relax and played to soft. He barked back at Josh, that's about it. He needs to prove himself is worthy of opponent physically. I like his post moves, but he needs to practice with quicker feet. it's 21st century.

Hunter? yes. he will get push around if he is put in the post, but he can at least shoot a J or a hook. he is another softie that needs to grow more muscle and beard.

Who is going to be able to handle Joshua Smith physically? There isn't anyone in the country.