What caught my eye at Saturday's practice: Aug. 9 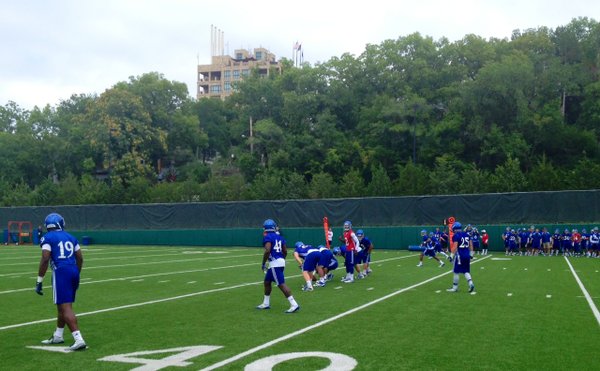 Quarterback Montell Cozart communicates with his offense during a drill at Saturday's practice. by Matt Tait

Saturday marked Day 2 of preseason camp for KU football. Still no pads (per NCAA rules), but still plenty of action to take in during the 20 minutes of practice open to the media.

We're fortunate enough to get this kind of first-hand look at the team nearly every day throughout August, so there will be plenty of time to dissect newcomers and all of that other stuff in the coming weeks.

Today, what jumped out to me was the portion of practice that came right after stretching in which Montell Cozart (#2) and the first-string offense ran mock offense against no defense to get into the flow.

Both were promising. It won't mean anything if it doesn't translate to Saturdays this fall, but it's all we have to go on as of now.

First, the offense. With offensive coordinator John Reagan standing on the sideline and signaling in the calls, Cozart looked once to the sideline from the shotgun and then jumped up to the line of scrimmage to communicate with his offensive line and skill players. There weren't multiple looks over — though there probably will be — and it didn't appear to be mass confusion. One look, I've got it and go. Efficiency was a big word brought up throughout the offseason and that was definitely the word that came to mind when watching this drill. For the record, it was the same sort of pace and procedure when Michael Cummings (#14) jumped in with the second string.

Center Keyon Haughton (#70) and Cozart were the two big communicators, which tells me something about Haughton. Obviously he was here in the spring, so that gave him some time to get comfortable. But if he's winning that battle over Joe Gibson (#77) and Jacob Bragg (#55) right now, it must be because the coaches and players trust him. Good sign.

A couple more quick things about Cozart from Saturday:

• Perhaps the thing I liked most about what I saw was the way Cozart stayed on the field and high-fived all 10 other offensive players as they came off after the drill was over. That's leadership and really gives you the indication that Cozart's in it for the team not for himself.

• During individual throwing drills with QB coach Ron Powlus, Cozart had an issue with his helmet and when the equipment manager came over to fix it, you could really see the focus on his face as he continued the drill. In general, he's a happy, fun-loving guy and likes to smile and clown around. But when he's out there working to get better, it appears as if he's all business.

• I'm not saying Cozart's going to be an all-Big 12 quarterback and that KU's issues at that position are fixed immediately. But it's clear that the young man who has been put into a huge position, is taking this opportunity very seriously and is doing everything he can to make sure lack of focus and determination won't be the reason if things don't get better.

• Finally, since I missed Nigel King (#9) at Friday's practice, I made sure to get over to the receivers today and I was very impressed by what I saw. Again, King's a big boy and he stood out for his height among the group. But every one of those guys appears to be working much harder now than I ever remember seeing them work in the past couple of years. First-year WR coach Eric Kiesau clearly has made an impact and, going off of what little I've learned about Kiesau so far, I'm guessing he's far from done with his work. Their footwork looked much better, they ran drills harder and with more purpose and they all caught the ball with their hands, away from their bodies during every drill.

• The four freshmen receivers — Darious Crawley (#12), Bobby Hartzog (#5), Derrick Neal (#7) and Tyler Patrick (#4) — really stood out to me, as well. It's clear that they're not as polished as the upperclassmen, but man are they working. In some cases, they appear to be trying a little too hard (isn't that better than the alternative?) and Kiesau kept having to remind them to go hard but to remain under control. Not too surprising, especially for Day 2, but props to the young guys for getting after it. That's a credit to the coaches and the upperclassmen, who clearly won't accept anything less.

No access tomorrow, but the blog will be back up on Monday afternoon, so be sure to check back.

Here's a quick video Benton Smith threw together from some of today's interviews with the defense.

And, in case you missed it, here's a look at the What Caught My Eye blog from Day 1

I'm getting excited. I really feel we will win enough to make a small bowl and if so I will be there. Been a season ticket holder for 16 straight years. Hope my due diligence pays off this year.

How did Wrench look? As Wrench goes, so goes Kansas...

Wrench isn't there. He'll be going to Butler County CC as he did not qualify academically to play at Kansas.

Brock was making a joke. He follows KU Football and knew that Wrench failed to qualify and went to JuCo.

That aside, I think most people would agree that this season begins and ends with our ability to formulate any kind of semblance to a passing game. We've got the boots on the ground, but if we can't at least threaten to move the ball in the air then we will end up with another 1 to 3 win season.

Traevohn Wrench did not qualify academically and will attend Butler County Community College in El Dorado this season. Seniors Brandon Bourbon and Taylor Cox, juco transfer De'Andre Mann, a junior, and freshman Corey Avery will share the load at running back.

The coaches must have known Traevohn wasn't qualified and in danger of being a JuCo. Tom, do you think that was the motivation for going after Avery?

Maybe why they went after Mann so late. Avery committed first.

Saturday's Practice? One practice? What ever happened to Two-A-Days?

There are NCAA rules about the number of practices, when you can start wearing pads, when you can start 2-a-days, ... Our schedule is a bit slower than other schools because our season starts a week later, which is the craziest rule to me - you essentially lose a week of practice by having a bye week at the start of the season vs. during the season. Right up there with limiting what a sub-500 team can do during December, while allowing the better teams to continue practicing and getting better.