What caught my eye at Saturday's open practice: Aug. 16 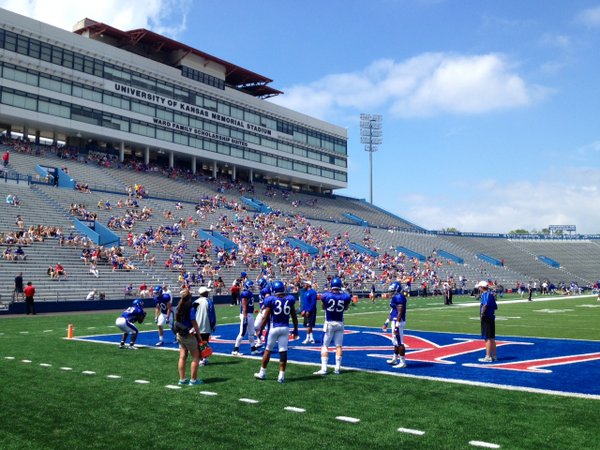 A look at the Memorial Stadium stands on a gorgeous day during the KU Football Fan Appreciation Day. by Matt Tait

And there was plenty to watch.

It's always nice to get at least one practice where we get more than the 20 minutes at the beginning. Not because we learn a ton of information that we might not otherwise see (Coach Weis is smart enough not to show too much when the eyes of the media and fans are on the field), but because it gives us a chance to look a little more closely at players and positions.

That's what I focused most of my time on during the more than 2 hours inside the gates on Saturday and several things stood out.

Here's a quick look at most of them:

• The running back position is loaded. It's not just talk. All four of the guys competing there could start, could handle the load and/or could lead this team in rushing. That's a good thing because of the pounding backs usually take. It's an even better thing because it'll keep the Jayhawks from being too one dimensional as each guy gives a little something different. One thing I noticed Saturday that impressed me was that all four guys — Brandon Bourbon, Taylor Cox, De'Andre Mann and Corey Avery — can both run inside and catch the ball out of the backfield. Nice luxury to have.

• Sticking with the offense, I thought QB Montell Cozart looked fine on Saturday. He was mostly accurate, moved around well in the pocket and also turned it up field when he had to and, perhaps most impressively, fit the ball into some tight spots. Michael Cummings also looked really good and I've heard he's had a terrific camp. Makes sense because this style of offense fits the type of player he is, which is probably why he appears to be leading in the race to become Cozart's back-up. That said, T.J. Millweard threw some nice balls and had particularly good touch on his deep ball. He just doesn't look quite as natural and comfortable as the other two. That's probably mostly experience and confidence.

• At wideout, the Jayhawks really appear to have some players. Rodriguez Coleman had a nice day and looked really athletic and Tony Pierson had a fantastic day. As the coaching staff has mentioned, Pierson is really starting to look like a wide receiver. He was locked up with Kevin Short in several one-on-one situations during Saturday's practice and he got the better of Short more times than not. That was probably my favorite part of the day on Saturday. Not only watching Pierson and Short go toe-to-toe, but watching all of the WRs battle with the DBs in one-on-one situations. For the most part, the receivers won the battle this time.

• Speaking of wideouts, those four freshmen might be special. Tyler Patrick, Darious Crawley, Derrick Neal and Bobby Hartzog all have a real natural feel for the game and they're fiery. They all know that the deck is stacked in front of them, but you wouldn't know it by watching them compete. They're out there to push their teammates on offense and defense every single rep. That can only help a team. Of the four, my guess is that Derrick Neal might be the farthest along. He just looks to have the best feel for the offense and, although he's tiny, he really uses that to his advantage. I could even see him fitting into the passing game in some kind of specialist role. On one play, wide receivers coach Eric Kiesau turned his back to the play and told someone on the sideline what was going to happen behind him. Sure enough, Neal ran a crossing route after lining up on the far side and caught the ball in the exact spot Kiesau said he would for a gain of 20-30 yards. That's a good sign for Neal and also for Kiesau, who looks like he's been with the program for years. 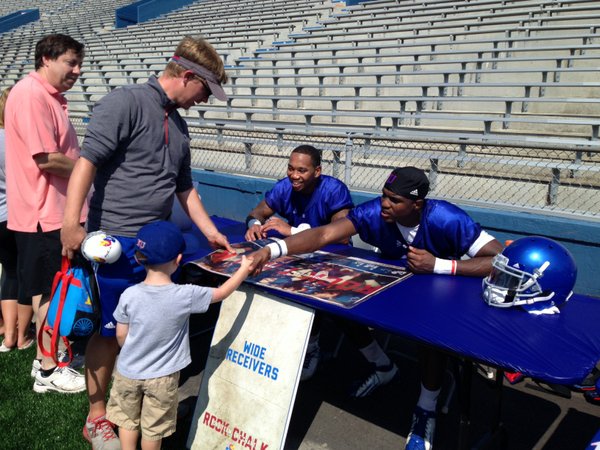 KU receivers Nick Harwell (left) and Justin McCay meet a young fan in the autograph line after the practice. by Matt Tait

• A couple of quick notes about kickoff and punt return. Isaiah Johnson, Tre' Parmalee, Kevin Short and Nick Harwell all handled punt returns on Saturday and here was how I saw it. Most sure-handed: Parmalee. Most dangerous weapon: Harwell: Biggest gambler: Short. As for kickoff return, JaCorey Shepherd, Harwell and Short all looked equally dangerous back there. Too bad they don't figure to get many chances. Not because Weis won't use them. He's said he has no problem using front-line guys on special teams. Instead because the kickoff return has been taken out of college football more and more in recent years with the rule changes.

• Speaking of Weis and special teams, his talk about giving a good chunk of his time to that unit is no joke. He's very involved with every aspect and very attentive while special teams drills are happening.

• In the kicking department, both Trevor Pardula and Eric Kahn looked good on punts and kickoffs. No surprise there, but it was nice to see Kahn has developed into a more than capable back-up. Pardula ripped off one of his signature 70-yard punts and, unlike last year, when that brought a scream of some kind from Weis, it went without much chatter this time. It's a great sign when that kind of thing is expected instead of celebrated.

• In the field goal department, freshman John Duvic hit six of the seven kicks he attempted, missing only from 42 yards. One was an extra point and the rest were slowly and steadily farther out starting at 25 yards and going to 47. He definitely outperformed returning starter Matthew Wyman, who missed four straight during the same drill. Too bad too. We talked to Wyman before the practice began and he said he's had a great camp and felt more confident and consistent than ever. Just goes to show how doing it in front of a live crowd can change the game.

• The misses might not have been all on the kickers. Long snapper John Wirtel had a rough day as he bounced several snaps back to holder T.J. Millweard and even fired a few over Millweard's head. Props to Millweard for doing a great job of getting most of them down so the kickers had a chance. Millweard looks really strong in that role. He's confident, has good hands and is constantly encouraging the KU kickers.

• No surprise here, but I thought the DBs looked very physical. Both in the passing game and in the run game, these guys really believe in their abilities and aren't afraid to hit.

• Junior cornerback Kevin Short is a very instinctual football player. He just seems to be where he needs to be and do what he needs to do with minimal effort. He likes to talk, too.

• The area in which the wide receivers have upgraded the most is not hands, speed, routes or anything like that. It's confidence. Credit Nick Harwell for a lot of that and Kiesau for a big chunk, as well.

• At the end, when they were running sprints — O-Line vs. D-Line, LBs vs. TEs and QBs, DBs vs. WRs — every group started its sprint from the goal line to the 50-yard line with one word... “Win!”

• After the sprints, the Jayhawks lined up for another round of the ALS Ice Bucket Challenge. Coach Weis took the challenge on Friday night and today it was the rest of his coaching staff. 19 buckets were lined up at midfield and select players got to drench the coaches and support staff at the same time. Probably felt great out there since it was pretty hot on the turf. 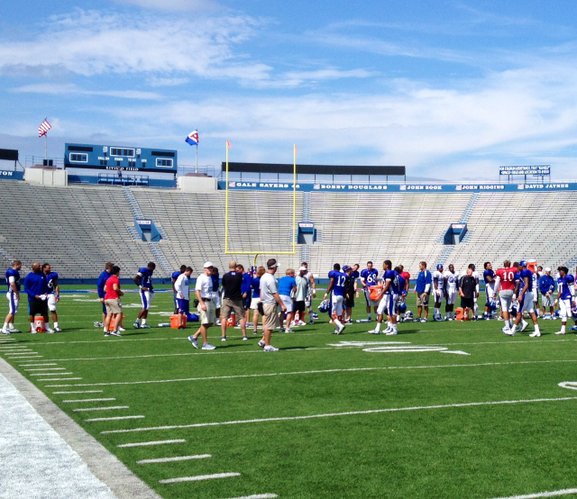 Players and coaches line up at the 50-yard line for another round of the ALS Ice Bucket Challenge in which the players dumped ice water on the KU assistants and support staff at the end of practice. by Matt Tait

• All in all it was a pretty good day. Not a lot was learned, but again, we were able to see these guys do a little more and move closer to full speed, which helps in evaluating where they're at. Only about 500-700 fans showed up but they almost all stayed start to finish and many of them hit the field for autographs afterwards. I heard several Jayhawks say sincere words like, “Thanks for the support,” to the fans who came and stuck around for a chance to meet the Jayhawks.

Here's a nice video of some of the action from Benton Smith...

And a photo gallery from Nick Krug...

Larry Csonka of the Dolphins was always one of my favorite players. He loved to hit people and would actually go out of his way to do so often to the chagrin of his coach. A good running back is a joy to watch, how they can spot the holes and just the right moves at the right time.

I am feeling nostalgic today because I also remember a poster of Joe Namath back in the pocket looking for someone open and a huge defensive player is just a foot away. Namath appears to be oblivious to him, but I know he wasn't. A good quarterback knows he has to stay in there, but not too long, the offensive guys will get frustrated with you and tell you to just throw the ball all ready, and take the hit when necessary.

I love football, the strategy, the tactic, watching intently to try to find a tell to let you know what a player is going to do, the magnificence when a player is truly in the moment and just THERE. Man, you just can't beat that for getting your heart pumping and your spirits soaring. You go, KU!

Something I'm starting to see with this team is camaraderie and a sense of team. Let's hope it results in wins now. The offense maybe developing reliable weapons to create an improved passing game now. Crossing my fingers.

Keep drives alive...keep the defense off the field & rested...convert critical 3rd downs...I'm hoping we have the offensive improvement, got my fingers crossed too. RCJH

• The area in which the wide receivers have upgraded the most is not hands, speed, routes or anything like that. It's confidence. Credit Nick Harwell for a lot of that and Kiesau for a big chunk, as well.

I was hoping the hands would have been upgraded the most. I never doubted these guys didn't have confidence. Show me a college athlete that lacks confidence. Hopefully the hands follow right behind the confidence. Less drops will be a welcomed sight.