What Montell Cozart as the starting QB means for Kansas football 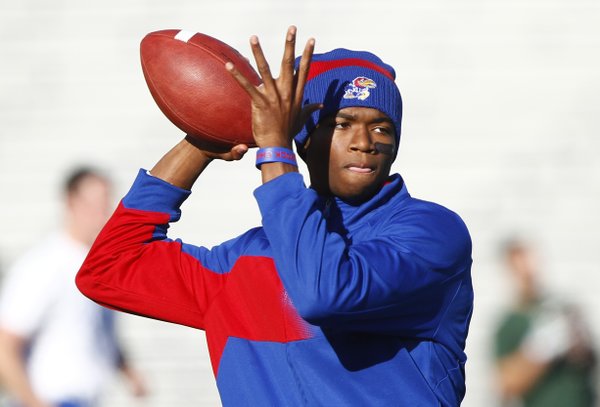 Kansas quarterback Montell Cozart throws during warmups prior to kickoff against Baylor on Saturday, Oct. 26, 2013. by Nick Krug

Charlie Weis' decision to name sophomore Montell Cozart Kansas University's starting quarterback for the 2014 season has everything to do with Cozart, his ability, his development and his potential and nothing to do with anything else.

It was all about Montell Cozart and the idea that plugging him into the starting spot — provided things go well from here — brings KU closer to competing with the rest of the Big 12, which ultimately, will determine whether Kansas can get things turned around any time soon at Memorial Stadium.

And it's a fantastic decision.

After last Saturday's spring game, of which Cozart was named the offensive MVP, both Weis and Cozart spoke about the Jayhawks' QB competition still being wide open. Cozart, showing his true character, said he thought all — yes ALL — of the QBs on KU's roster were about equal and Weis said the coaching staff was in no hurry to name a starter because of the advantage it might give them to have future opponents attempt to prepare for multiple guys.

That stance, at least from Weis, changed quickly. As he noted in the press release that named Cozart the starter, Weis and KU's offensive coaching staff went through extensive post-spring evaluations and individual player meetings before reaching this conclusion. 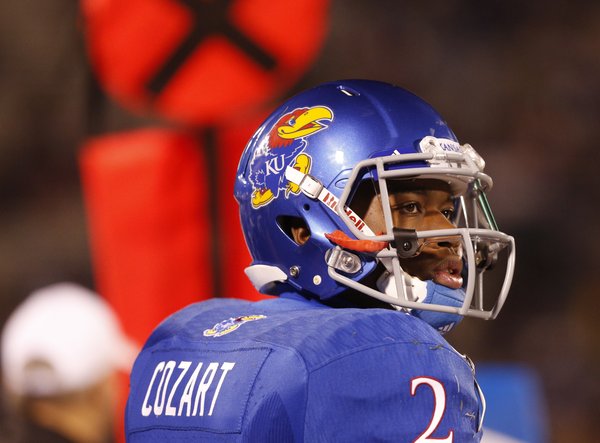 Kansas backup quarterback Montell Cozart watches the scoreboard against Baylor during the second quarter on Saturday, Oct. 26, 2013. by Nick Krug

It's tough to ask a coach or a player to make a definitive call about such an important issue right after a game, especially after a game that many believe is little more than a glorified practice.

But it's a great sign for the future of KU football that Weis wasted no more time after evaluating the spring.

I'm a Heaps guy. He has talent, is a great teammate and an even better person. And I like all of the rest of the quarterbacks on KU's roster, as well. But after seeing Cozart's development with my own eyes last weekend, it was obvious to me — and probably to hundreds of the rest of you, too — that Cozart was the clear pick.

He's not the next Robert Griffin III (at least we don't think he is) but he's by far the closest thing the Jayhawks have had to that, maybe ever. There will be growing pains ahead and Cozart will have his ups and downs. But making this call today instead of three or four months from now gives the Jayhawks, the coaching staff and, most importantly, Cozart a chance to work out some of those kinks during the summer before we even get to the fall. 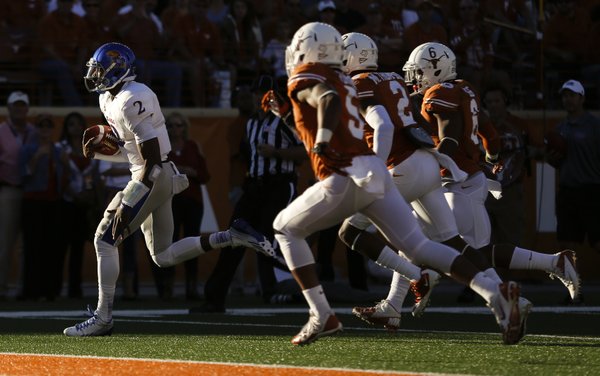 Kansas backup quarterback Montell Cozart runs in a touchdown against Texas during the fourth quarter on Saturday, Nov. 2, 2013 at Darrell K. Royal Stadium in Austin, Texas. by Nick Krug

Cozart is now this team's unquestioned leader at the game's most important position. And judging by the Twitter response from a bunch of his teammates — on both offense and defense — the rest of the Jayhawks are just as ready for the Cozart era to begin as Cozart and the coaching staff. 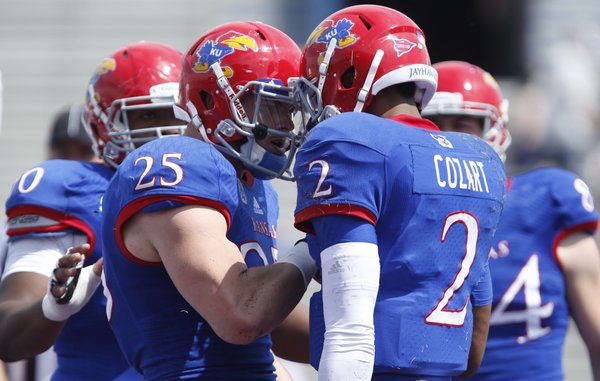 Blue Team running back Brandon Bourbon (25) celebrates with quarterback Montell Cozart after a touchdown by Cozart against the White Team during the second half of the Kansas Spring Game on Saturday, April 12, 2014 at Memorial Stadium. Nick Krug/Journal-World Photo by Nick Krug

Cozart is the best quarterback by far on the Jayhawks roster! ROCK CHALK!! Hope to see some improvement this year

"Weis said the coaching staff was in no hurry to name a starter because of the advantage it might give them to have future opponents attempt to prepare for multiple guys."

I couldn't help but find this quote amusing when I first read it. I'm sure Big XII coaches spend a lot of sleepless nights over the summer worrying about how in the world they are going to game-plan against the juggernaut Jayhawk offense. Snarkitude aside, I love that they made this decision. Good luck Monty! You're the man! Now we just need to get the o-line starters worked out so they can begin to gel and form a cohesive unit. Rock Chalk!!!

I don't think he was meaning Big 12 teams... Think he was more talking about KU's first opponent or two. And if he had dragged this thing out and made no pick, both SE Mo. and Duke probably would have had to at least consider preparing for two QBs.

This is the better direction to go for the team, but that advantage can be big when it happens naturally.

Funny thing about backups though, is that you so often see a change-of-pace QB come in and have success while the defense tries to adjust. Heaps might be a great backup for part of, or even a whole game.

If Cozart gets injured, god forbid, I could see Heaps come in and zing it down the field for a bit. But if it’s more than a couple games, I agree Cummings might be the best choice. (Honestly I always hoped he’d had the chance to run an offense like this. Matthews too for that matter.)

With all due respect I don't see Heaps zinging the ball anywhere. Our second former 5 star recruit doesn't pan out. Scout team player of the week evey week we heard. Then we heard how Justin McCay was gonna be the next Des Briscoe. Well we know how that went. Speaking of McCay is he still on the team? Haven't heard a mouse fart about him all spring.

McCay is 2nd string WR (I forget who he's backing) and made at least 1 catch in the spring game.

I like it, I think we get to a bowl game with Cozart and with the talent/ experience on D!

With a normal schedule, I would jump right on with you. But lemme see if I can scrape up 6 wins here.

That leaves @Oklahoma, @Kansas St., @Baylor, @TT, @WV and home against Texas or Oklahoma St. for our last win.

Boy is it gonna be tight, even if we play out of our minds.

There is always a chance a couple of our opponents fall flat this year. Texas has a new coach and will be transitioning, and we get them at home. Cozart pretty much kicked WV’s tail last year but we have to go there next year. Oklahoma St.? At home, if we get strange bad weather... Hey we were in it to win it two years ago.

It'll all come down to how we finish games. If we win as many close ones as possible we have a shot at 6 wins. If we let a few slip away, we'll be back at 3 wins.

Duke (a bowl team last year, but not sure who they return this year) in week 3 will give a strong indicator for the year.

Jim thinks we're going to a bowl game. I'll have what ever he's having.

You're entitled to your opinion

6-6 record HM. Well, if we won the 3 non conference games then we need to go 3-6 in conference, which could happen, but if we lose to Duke then 4-5, which will take a lot of breaks. A tough road this season indeed. Cozart will be the key because he may have to win games for us if the line breaks down.

Bowen isn't coaching D for the Royals or Chiefs, so I like their chances better

Jake Heaps has to be thinking about leaving. Lower division so he can play. While I have to agree that Cozart is the best option, it does not say much for KU. They only play 6 home games (they should never play road non-conference games on years with only four Big 12 games). I don't see 6 wins.

@ Duke is a return game from the time when we had 4 non-con ('08?) and both were borderline bowl teams trying to get better.

Well, the one thing it means to me is that I'm not buying any tickets this year. If I go to the game, I sit thru the whole thing no matter the score. If I watch at home, then it want bother me to turn the channel to something comparable - something like Dora the Explorer or Peppa Pig.

The most important part of Cozart, now that he is the choice is his emotional make-up. Is he a guy who can in spite of ups and downs, continue to improve and realize the path he is on and persevere?

There is no question he has all the skills necessary for the job, and at this level as well. Now, can our staff develop a kid with those skills? To me that is the big question.

I have more confidence now that Reagan is on the staff. Prior to this season, we had no coaches on offense besides Mitchell who had experience with spread offenses.

I am convinced Reagan will determine what Montell can do and then refine it so execution is as good as possible. If a talented QB executes well, the offense is going to be challenged to stop him.

Makes you wonder why Powlus is still around. I wish Charlie would’ve dumped the last of his Notre Dame ties and found a new QB coach to help Reagan develop a dual-threat guy. Hopefully Kiesau will be contributing some too.

GREAT decision by Coach Weiss. Even last year it was clear that Cozart was the most exciting offensive player for the Hawks. I will be at Memorial Stadium this year. No more boring offense!