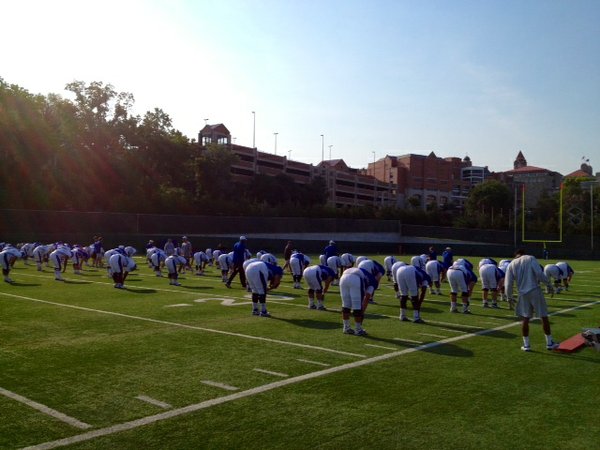 Signs of the early morning sun creep across the KU practice fields as the Jayhawks go through stretching Wednesday morning. by Matt Tait

It was business as usual on the practice field for the Kansas University football team this morning.

But a person standing on the sidelines watching made this morning's session unique.

T.J. Millweard, a red-shirt freshman quarterback at UCLA who has decided to leave southern California, was in town on an unofficial visit and appears to be considering Kansas as his next destination.

According to reports, the 6-foot-4, 230-pound former three-star QB who ranked as the 23rd best quarterback in the country in the 2012 recruiting class, has decided to leave UCLA to finish his career at a school closer to his hometown. Millweard went to high school in Fort Worth, Texas, but also lived in Kansas City for some of his life and has family members with ties to this area.

Millweard sat out the 2012 season and will have to sit out the 2013 season after transferring. Wherever he ends up, he'll have three years of eligibility remaining following the transfer year.

Here are a couple of recent updates on his decision to leave UCLA:

Here's a look at the rest of what caught my eye at Wednesday morning's practice:

• Found myself looking over the offensive line again and, although we've talked a lot about Pearce Slater and Zach Fondal, I want to give Brian Beckmann and Joey Bloomfield their due, as well. Those two young guys have legit size and look to be in very good shape. It's hard to know how much they will impact the O-Line in 2013, but you can bet that both are a big part of KU's suddenly bright future on the offensive line.

• I noticed that newly named scholarship athlete Connor Embree, a wide receiver last season and in the mix for kick return duties this season, spent most of the morning working with the running backs. Embree is listed with the third string at the F position behind Tony Pierson and Brandon Bourbon, so it makes sense that he would be over there working with Bourbon, who continues to look really sharp as camp comes to a close.

• Both the running backs and wide receivers spent some significant time working on getting off of press coverage at the line of scrimmage today. Guys were beat up with pads as they broke out of their stances and were taught to use their arms to keep defenders' bodies, hands and arms off of them as they tried to get into their routes. 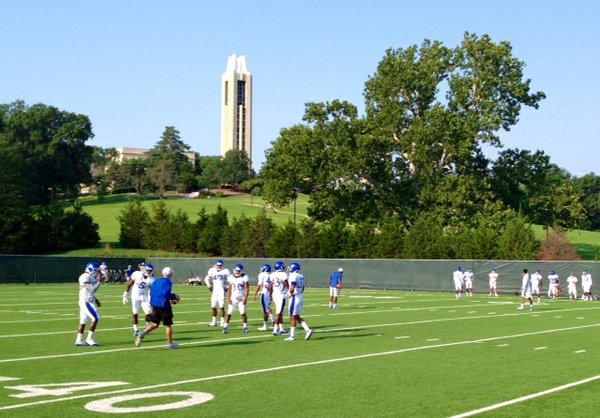 • With just one more practice session to view remaining before KU goes into preparation for the upcoming season mode, I thought it would be wrong if I didn't point out how much I enjoy how many of these coaches get down and work with their players during drills. Clint Bowen, Buddy Wyatt, Scott Holsopple, Ron Powlus, Scott Vestal, Jeff Blasko and several others, put all they've got into making these guys better every day. Sometimes, especially with Bowen, it looks like they could still be out there playing. It remains to be seen how much all of this work will pay off but there's no question that this football team and the entire coaching staff have worked their butts off this offseason to try to get things turned around.

No media availability tomorrow, as that's faculty appreciation day. Then, we'll wrap things up Friday morning with one more look at the team on the field. After that, the countdown to Sept. 7 can officially begin.

Matt, Way to go! I was curious who the transfer was and its like you read my mind. He would add competition to the QB spot and can always use that. Since Cummings doesn't seem like a thrower, more of a runner at least what we all saw last season, getting another quality arm would be really nice.

Matt, since Millweard is looking to transfer now (prior to the 2013 season, do we have a scholarship to give him to get him on campus? I know that we just placed a couple of former walk-ons on scholarship. Does Weis still have scholarships from last year that he can use this year? Can he use a scholarship from next years' class?

If he comes this year, I believe it would be as a walk-on. After that, there's always the chance that next year's class doesn't fill up or a spot comes open and he could slide into a scholarship.

Gotta see if he's coming to KU first, though.

Thanks Tait. It'll be interesting whether or not this hurts our chances with him.

Do we have Pearce Slater back in the state of KS? No update there has me concerned.......

Would like to know what's going on but I'm sure if Tait had factual info he would provide. We do not want to speculate. That being said, we need him.

The whole thing should be toned down just a bit. He's not here. As far as I know, he's still in California dealing with what I've been told is absolutely a family medical emergency.

As you mentioned, as soon as he's back, we'll report it. Until then, there's nothing to report. Coach Weis has a press conference set for Friday and I'm sure we'll get some kind of update then, if not before.

But having him or not having him is not going to make or break the 2013 season. He's a solid prospect and it would be great if KU could keep him around, but he's got some work to do before he becomes KU's next dominant offensive lineman.

good update. Maybe deleting his twitter was just a red herring. Hopefully all is well soon back at the Slater residence.

i agree man, I can sense it was getting agitating. What are your thoughts on Rod Coleman and Mark Thomas? Think they see much time?

I think Coleman could be huge and I think Thomas could be solid if he can get on the field. Good size, good hands. I just don't know how many reps he'll get.

And, I'm not agitated in the least about all the Slater questions. I get it. It's interesting. I just didn't want people to think that he'll step in as soon as he's back and be what Tanner Hawkinson or Anthony Collins were.

Why is that? It's because sharing his role and importance and everything was a one-time deal and it was new and fresh last year.

He's still very much a part of the team and continues to work his butt off to learn the ins and outs of coaching. No need to keep reporting it, though.

But trust me, he's out there every day doing everything he can to improve this team and he's very well liked by the players and the staff.

Cool. Glad he’s still sawing wood. I liked reading about his relationships with the players and coaches. To me he is one of the more interesting coaching/staff stories. I guess I kind of thought of his progress like one of the players. Charlie semi-joking about grooming him to take over when he leaves, ’n all.

It is interesting. But until it changes enough to where he has a bigger role or something like that, it seems more productive to focus on the guys who will be playing on Saturdays since there are so many stories to tell there.

I like Charlie Jr., though. A lot. And I think he's on his way to an impressive coaching career. I can't remember seeing anyone that young be that into the X's and O's side of the game.

Sounds a little like Josh Pastner - in a football sort of way?

Looks like Bill Snyder offered this guy in 2012. I wonder if he’s also roaming the sidelines at Silo Tech this week. In the link he says he likes wearing his boots. Just sayin’...

He’s in the mold of Jordan Darling, but he had a lot more interest coming out of high school. In addition to K-State and UCLA, he had offers from Arizona St., Arkansas and Virginia Tech, and he had interest from Oklahoma, MU, Texas A&M, TCU, Cal, Stanford and others. If I’m Darling, I’m sweating this a little.

Between Darling and Cozart, Cozart has looked like the better QB so far. Some even thought Cozart out-performed Cummings. Even more reason for Darling to be sweating.

Hey may be visiting KSU, but notice he visited us first.

Devil’s Advocate: KU is closer to the airport. It’s on the way.

Your newspaper is lucky to have you.

Many thanks. I enjoy my job.

It would be good if he came here because he adds to the competition at QB. Competition usually means you have multiple good choices at a position and that depth competing for a starting spot makes those involved in the competition better players. Competition at all positions is something KU has been missing for several years now and when a player doesn't have competition for a position, his rate of improvement is significantly slower because he doesn't have someone pushing him to get better on the field. Lack of depth and competition also hurts on the field because you don't have back ups capable of playing at an acceptable level and the starters just get worn out by the end of the season. I believe the lack of depth was one of the biggest culprits in ISU and WVU taking KU behind the woodshed at the end of last season. Hopefully with more depth, KU won't look exhausted at the end of games or the end of the season because ISU and WVU are winnable games at the end of the season and will be necessary if KU goes to a bowl game this year.

It was a painful process watching last season, but purging the dead weight from the program was a necessary step in trying to make KU consistently competitive in the Big 12 in the long term even though it came at the expense of being uncompetitive at time last year. Nobody enjoys watching a team lose every week, but it was refreshing to actually see a team out there that knew where to line up and played like they cared. The next step is changing the mentality from "we hope we can hold on" to "we're going to beat them." When that mentality finally takes root, KU will start pulling some upsets and will not be circled as an automatic on a teams schedule.

Matt ~ Your and the other LJW writers have done more than a great job in keeping us updated ~ even more importantly, enthusiastic about this season.. Well done to all. The information about, and interviews with individual players and coaches have been especially worthwhile. More than ready for that first coin toss.

It would definitely be nice to have more quality players at all positions, but after sitting out a year, it would seem to make sense for TJ to go the JUCO route for a year and get some serious reps.

These pictures are awesome! Especially love the second one, just beautiful...damn i miss Lawrence! Can't wait to come back for some games this fall!

I can't remember a recruit sitting out 1 year, then a 2nd year after transferring. That's a lot of sitting out!