What caught my eye at Tuesday's practice: Nov. 6 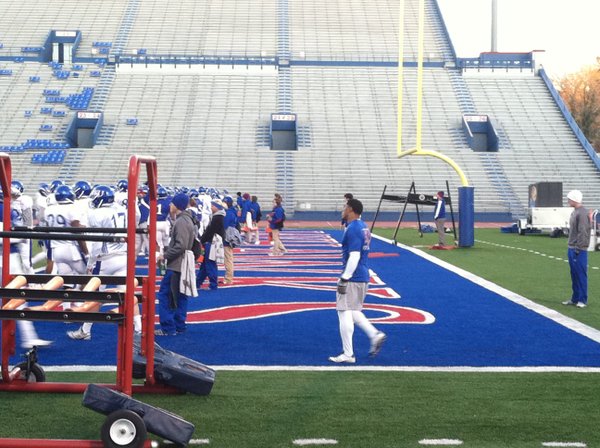 KU senior D.J. Beshears (in the end zone, not in uniform) returned to the practice field Tuesday. by Matt Tait

For the first time in all of my trips to KU’s football practices this season, we had one without a Bruce Springsteen or Bon Jovi song.

Not sure if that was out of respect for Election Day, some statement of support for the folks back east impacted by Superstorm Sandy or if someone on Charlie Weis’ staff simply forgot to charge the iPod. Either way, it was really weird and it offered a chance to hear just about every word yelled or screamed from all four corners of Memorial Stadium.

Running backs coach Reggie Mitchell was in a particularly entertaining mood today. Not sure if it was because he was angry or because he was feeling good, but Reggie was loving his role as the guy beating the running backs with the bag as they ran through individual drills.

“Makes me feel better,” he kept saying, while calling his shot about what type of swing he was going to take at each back.

Pretty funny stuff. If there’s one group and position coach who can feel really good about what they’ve done this season, it’s Reggie and the running backs.

Here’s a quick look at what else caught my eye from a chilly Memorial Stadium on Election Night.

• Senior wide receiver D.J. Beshears was back out on the field but did not fully practice. He went through warm-ups — looked great running — and did all of the stretching, but he was not wearing pads. He also was no longer wearing a sling, which should be taken as a good sign that his shoulder is healing. At this point, it seems like the best-case-scenario and something for which Beshears is likely hoping for is for him to be able to play against Iowa State on Nov. 17, which also would be his senior day. We’ll see.

• I spent a little more time watching the QBs — mostly to keep a closer eye on BYU transfer Jake Heaps — and while I liked what I saw from Heaps, both in terms of the way he threw the ball and the way his feet moved, it’s worth pointing out that it’s hard to tell much during individual drills. Still, it looked to me like Heaps has the best (read: quickest) feet of the bunch, with Michael Cummings a close second. Turner Baty’s probably third, though his footwork is a little choppier, with Dayne Crist fourth and Blake Jablonski fifth. That should tell you all you need to know about why Cummings is the guy they’re sticking with and also should get you excited for the future... Just not too excited, OK?

• One more quick injury update, Toben Opurum, who missed a lot of last Saturday’s loss to Baylor, also was a full-go for practice. Weis said Sunday night that Opurum was in much better shape this Sunday than he was last (after suffering an injury vs. Texas) so look for Toben to be out there a little more this weekend.

Is there even a remote chance of DJ getting a medical redshirt? It seems like he has missed almost the entire season.

Uh oh! No music from the Jersey guys at practice?? Somethings happened...

I am loving our backfield and the daylight they get from the Oline.

Ralster, I completely agree with your assessment. Why we would care about the past, and as far back as Mason is beyond me. Move on people, the current administration and staff are completely 100% bought in. To channel Ralster......"...stay patient." RCJH

Our patience hasn't bought much. Whether it's the high-profile basketball reputation, a geographic complication, or just an old-fashioned curse....one thing is certain:

The University of Kansas will never be successful at football.

Dang, Reuben, who peed in your Cheerios? I have to totally disagree with you on this one. If you are going to say will KU ever be as successful as a Texas or Alabama or Ohio State, then you are probably right. However, if you define successful as being competitive year in and year out, consistently being above .500, consistently going bowling, and occasionally challenging for the Big XII and a major bowl, then I think KU can definitely be successful.

Our football facilities (other than the stadium, and I'm not trying to start that debate) really are top notch, the coaching finally appears to be good, the recruiting is picking up, we play in one of the top two high profile football conferences, and there really isn't any reason why KU CAN'T be competitive.

One thing that basketball has had and football has never had is traditions. From the way the Rock Chalk chant echos off the walls of the Fieldhouse to the newspapers held up during introductions to the pride in being the loudest venue in college basketball, KU fans are a huge part of the success of KU basketball. It makes an impact on recruiting, on the players' energy level, the interest from coaches, and how we are viewed nationally.

I think Charlie realizes this and is trying to take some of that passion, tradition and history and bring it over to the football games. I really do like the team coming over to the student section and singing the alma mater after the games. It's little things like that that I think will slowly help change the way KU football is perceived by its fans and the rest of the country. Add in the facilities (I do think a staduim renovation/expansion is being planned for the near future), better recruits, better coaching, etc, and we can slowly turn the corner to relevance. Let's put it this way. If KSU could do it with their location, their facilities, and their history, then KU can most definitely do it if they want.

"Our patience hasn't bought much. Whether it's the high-profile basketball reputation, a geographic complication, or just an old-fashioned curse....one thing is certain:

The University of Kansas will never be successful at football."

I am not saying that KU will ever be considered a blue blood college football team but why can't they be top 25 consistently? Why can't they have years like the last 2 with Snyder or 3 or 4 with Gundy at OSU? I don't think those schools are at a geographic "non-complication" (whatever that means) and they are not tradition rich.

Truth is: If KU can consistently be a 7 win team (not saying great but good) they will draw attention and make the school a top tier athletic school. It will help out the non-revenue producing sports as well

I agree with you...but the examples are a bit off. Florida and Ohio State are teams that I would liken to the KU Orange Bowl football tenure in regards to basketball. In other words, they had a couple of good years, but really aren't consistently prevalent on a national level. Plus, they're both in weak basketball conferences.

Neither Ohio State nor Florida can be considered a basketball powerhouse, and Big 10 and SEC basketball is a joke...sans Michigan State and Kentucky respectively.

KU is essentially the Duke, North Carolina and Kentucky of the Midwest. Not necessarily a bad thing...because we do one thing and do it really well. We need to accept that, and let go of any delusions of football grandeur. The more we get excited about it, the more we will inevitably get embarrassed.

And to add to that...name me a school that's a perennial powerhouse in both sports.

Notice the trend? If you're the pinnacle of one sport, you're likely not going to be the pinnacle in the other...statistically speaking. The only remedy to this is to be slightly good in both sports. But I would rather be one of the greatest programs of all time in one sport, and mediocre or worse in the other.

That may be the sacrifice here. Sorry to say.

Sad really that a comment from someone touting an iconic name such as RJC, puts forth such a week stance. You would have never heard that from the real man who held that name if only in character.

You're right. I apologize.