What caught my eye at Wednesday's practice: Nov. 28 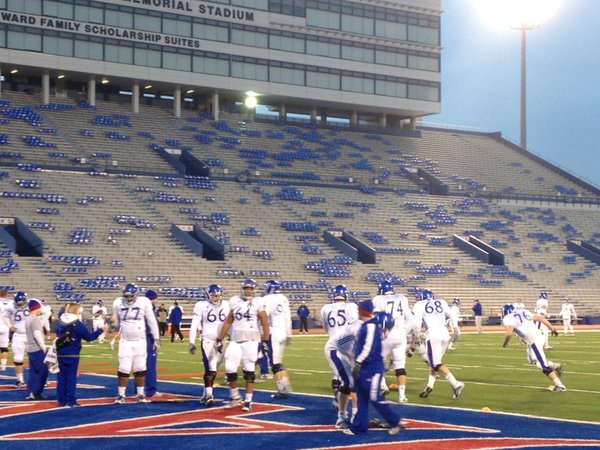 Seeing how Wednesday night’s KU football practice was the last one I’ll be at until next spring — that’s if KU coach Charlie Weis is kind enough to let us observe again — I figured I’d spend my time watching the one position that I think could be the most key for KU entering next season: The offensive line.

I’ve watched plenty of Jake Heaps to know he can play; we know the running backs are good and all returning; we know the receivers need help (but that’ll come from guys who aren’t here yet) and we know the defense will need to and try to upgrade speed across the board as it continues its attempt to try to keep up in the track meet Big 12.

What we don’t know yet is what the offensive line will look like without Tanner Hawkinson, Trevor Marrongelli and Duane Zlatnik, all seniors who will graduate in the offseason.

There are more than a few guys on the current roster who could factor into things next season and, the likelihood also still exists that Weis and crew will look to add a couple of impact players at that position in the offseason as well.

• Aslam Sterling, Gavin Howard and Randall Dent all will be back and all have legit starting experience. I'm assuming all three will improve tremendously in the offseason and could enter spring ball as potential starters.

• Red-shirt freshman Luke Luhrsen looks like he could become a starter. He’s big, athletic and strong and has improved throughout 2012, even reaching the point where he landed on the two-deep at left guard. With continued work in the offseason, he could be a candidate to start at guard in 2013.

• Sophomore Pat Lewandowski is a guy you should not forget about. The guy’s a beast with a ton of potential who probably just needs a little more time to get comfortable at his new position. Remember, he’s another one of those guys who played multiple positions — on defense — before moving to the O-Line under the current coaching staff. I like his footwork and mindset. I don’t know if he’s starter material, but I like him.

• Red-shirt freshman Damon Martin has to be another guy you put on this list. Through hard work and improvement, he became a starter this season for a game or two, only to fall off the depth chart as quickly as he elevated onto it. This is a big offseason for Martin.

• Finally, don’t forget about Riley Spencer, the fourth-year junior who missed most of the season with an injury but has great size, decent experience and, if healthy, could be in the mix at either tackle spot.

• One other note that I thought was fun to see Wednesday night was wide receiver Connor Embree wearing the No. 1 jersey with the scout team. That means Embree is playing the role of West Virginia’s Tavon Austin, a burner whom Weis thinks is as good a player as there is in the conference. I’m sure it’s been fun for Embree to play that role, especially in light of the fact that his father, Jon, was just fired as the head coach at Colorado.

That’s it, folks. Back to preparing stories for this weekend’s WVU game and the KU volleyball team’s run to the NCAA Tournament.

Thanks for your contributions and participation with this blog throughout the past eight months. We’ll be back at it again, bigger and better, next season.

I am not into pointing spelling errors, but "a burner whom Weis thinks is as good a player as "their" is in the conference."? :) I am sure that was one that got away!

In any case, thanks for the update, Matt!

Indeed. Thanks for the catch.

Hey Matt, is their a Charlie Weis song anymore?

Nope. The music stopped several weeks back. Never asked why, but I speculated a few times that it was due to a desire to increase the focus at practice.

Matt's summary of the team really puts it in perspective in terms of where the team needs to go next season to be competitive. Next year, it will be on Grunhard to bring in and coach up the line. If he does, we could be very competitive.

Even though the defense was the weakest link, we have to score more points and use more clock to win conference games.

Matt, whatever happened with Dylan Admire? He was offered by Nebraska and all the coaches seemed high on him last year.

I think he's the leader in the clubhouse for next year's starting center. They like him and he can play. Smart dude. Didn't mean to leave him off, just got in a hurry...

I think the secondary is as big of a concern for next year as the OL is. During the offseason we should move Patmon and Dexter McDonald to safety and start them there, and start Jacorey Shepard and either Tyree Williams, Greg Allen, or Colin Spencer at CB. Hopefully we land at least 1 more recruit at both positions that can contribute immediately next year as well.

At OL, I think the biggest concern for next year is LT by far. We should be fine everywhere else with Martin, Luhrsen, or Ngalu Fusimaholi at LG, Admire at C, Dent, Luhrsen, Howard, or Fusimaholi at RG, and Sterling at RT. I look for us to add 1 JUCO LT who can walk in the door and compete at LT with Lewandowski and Riley Spencer.

You left some guys out of the secondary mix. It's likely Ray Mitchell will start at safety with either Dexter Linton or Tevin Shaw. I think Shaw is going to be really good. We also have Victor Simmons who showed promise in 2011, and has the kind of size to replace what we're losing in McDougald. Don't forget, the secondary is Campo's speciality. More specifically, safeties.

I can't see Patmon playing safety. I think he's a nickel back and we'll need him there. I have a gut feeling that it was hard for Weis and Campo to redshirt Greg Allen this year. It seems he might just pick up where Brown left off. He has equal or better speed and at 204 pounds he is a HUGE corner. So huge in fact, that I wonder if he may find his way into the safety mix as well.

My gut also tells me that Colin Spencer is a year of Holsopple and Campo away from contributing. He's a freakish athlete but I think he's pretty raw.

Matt rocks! Your reporting is first-rate.

Matt - Will you be doing an article/series about the position groups? Who played? Who's leaving? Who redshirted? Who's coming? Way too early 2013 projections?

I'd be interested in this as well. It would seem like an easy update (in spring as well as late summer) depending on who leaves the program, who is recruited or redshirted this year and those of which return (/who is lost).... Keep it it up, I appreciated your coverage and upbeat attitude. It's refreshing to read non-cynical (ala skip baseless type) articles on a regular basis. Thx Matt!

Excellent work, Matt, thanks for all the great reporting you've done this year!!!

Matt, You have provided a service to the dyed in the wool KU FB fan that we have not had in the past. We read you everyday. Thanks so much.

Absolutely! Thank you Matt for all the reports prior to and during the season. It's makes it so much better when following the team from long distance.

Don't stop now, there will be lots of football news all year long, i.e. recruiting, transfers, redshirts, medical hardship extensions, coaching changes, Holsopple interviews & updates etc. If you are a true football fan every tidbit of news in the offseason shortens the wait. Thanks Matt for all your insight--keep writing.

Thanks for the continued solid reporting, Matt. I hope your bosses understand the value you provide KUsports.com.

Question to Matt or anyone else. I must have missed the news at some point that James Sims has no intention of trying his luck in the draft this year. Is it true that he's definitely coming back?

And also...is it just my imagination, or would he even have a shot at getting drafted this year? I mean, the guy put up some impressive numbers for a limited number of games and received some critical accolades in the process.

Why do they still have the stadium seat backs up? Is there a secret extra home game I don't know about?

Matt, thanks for the updates. I love reading these and appreciate all your work. I do have one question that I have asked before but no one has ever really answered. It looks like the team has been practicing a lot in the stadium. Is there a reason they use the stadium as opposed to the two brand new practice fields right next to the stadium? I'm sure there is a simple and logical reason, but about the only thing I can come up with is pumping in crowd noise.

Again, thanks for all your insight and stories this year. Definitely keep it coming during the off season!

It seems like we have potential depth at every position on the line except for center. Any idea who has the inside track for the #2 spot there?

Your reporting has been very good, but -- with you and all other JW staff --you don't seem to know anything about Defense!

You published a story that 'Bowen got it'. Shame on all of you, we' re at the end of the season, and he never 'got' anything.

You published a story about Campo having to work so hard for Defensive schemes. He clearly doesn't understand 'The Notre Dame Defense'. Probably less than 10 yrs old when Parshegian brought it out. Almost no coaches do!

The last game for me was K State. Zero Defense. Examples: KU #24, 23, and 55 hit the sub QB at the same spot. He shook them all off and made an extra 10-12 yds. No one coverd the receiver running backward down the field, but our db showed up, didn't look for the ball, but pushed him out. Gain of 17 yds.

Two basic items are essential to ANY defense: Tackling and coverage. Defensive Schemes are a poor third place.

The Defensive Scheme has to do with the assignment of defensive responsibility. The defense in 'The Notre Dame Defense' is man to man. The easy way out is to put our best coverage man on their best receiver, no matter where he lines up. A defender is assigned to every backfield man and the extra receiver. In any event, the Rules apply.

Even LSU and Old Miss had pretty poor defenses. ND has finally revised and installed Parseghian's defense. It would be virtually impossible to find a good coach who understands Defense.

Suffice it to say, we haven't had a good defensive coach for at least 9 yrs (maybe for 1 yr 8 yrs ago).

And the JW staff has no idea what a goof defense is. .