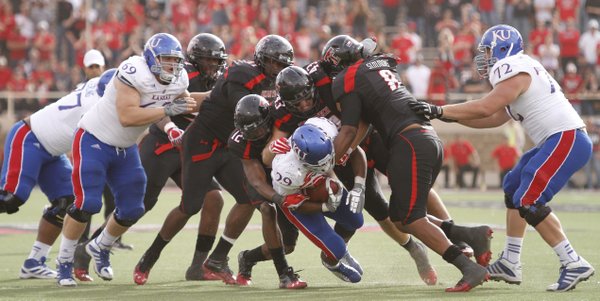 The Texas Tech defense collapses on Kansas running back James Sims during the second overtime on Saturday, Nov. 10, 2012 at Jones AT&T Stadium in Lubbock, Texas. by Nick Krug

All season, as the Kansas University football team has piled tough loss on top of tough loss, people, both inside and outside of the program, have preached progress.

Even with all of those signs pointing in the right direction for a program desperate to shake its losing culture, never was this team’s evolution from flops to fighters as evident as last Saturday in Lubbock, Texas, where the Jayhawks (1-9 overall, 0-7 Big 12) went toe to toe with the 25th-ranked Texas Tech Red Raiders before losing, 41-34, in double overtime.

We’re not talking about giving a nice effort and hanging in there against a better team. We’re talking about seeing a you-punch-we-punch, you-score-we-score, you-dig-we-dig-deeper mentality that has been building in the KU locker room slowly and steadily throughout the season.

It wasn’t just the final score or the fact that KU actually had a lead in the first overtime that showed yet more evidence of this team’s growth under first-year coach Charlie Weis. It was the way these guys played. Tough, physical, relentless football from the first quarter to the final extra period.

Were there mistakes? Sure. Plenty of them. But the Jayhawks overcame each one and refused to let the game get away from them despite trailing 21-7 early in the second quarter with Texas Tech driving for the knockout punch.

In the world of college football, winning is the name of the game. And no matter how much the Jayhawks have improved, they continue to fall short in the area it matters most. But one of the best things about progress is that it can inspire players to continue to work hard no matter what their record is because they can see and feel the improvements they’re making. This Kansas roster is full of players like that. Young and old. And it is coached by a group of men who know how to emphasize and celebrate those steps and learn from mistakes.

During the past two seasons we heard a lot about progress but saw very little evidence that any was being made. Anyone remember the net punting brag? The Jayhawks don’t have to grasp for straws like that any longer. They still have a ways to go before they can be considered a quality team with a shot at consistently winning in the Big 12. But they are competitive. And they are getting there. They are capable of preparing a gameplan that can deliver a victory against any team just about every week. And it seems safe to say that the rest of the conference now knows that.

Although this type of season and the promise of progress is not exactly what most of these guys were hoping for, it was and is a necessary step toward turning things around.

I think the players and coaches all realize that. But none of them are content with it.

“It puts a bad taste in our mouths,” said red-shirt freshman quarterback Michael Cummings of the double-overtime loss to Tech. “We’re definitely more hungry going into next week.”

Added Weis, who spoke with pride about the toughness shown by his club last Saturday: “We were extremely motivated in this game. And I think we’ll be even more motivated for next Saturday.”

That’s when the Jayhawks will play host to Iowa State at 6 p.m. in the final home game for 23 seniors at Memorial Stadium.

Weis, on Sunday, made a plea for people to pack the house — not for him, but for those seniors who have given all they have for four or more seasons and got very little in return in terms of feel-good moments.

Filling Memorial Stadium and standing as they take the field would be a cool way to cap of their careers. Will you be there?

Before moving on to this week's examination of Iowa State, here’s one last look at everything the KU running game accomplished last weekend:

I have been saying all year that we are going to sneak up and win one against someone (pretty much anyone in the B12) we're not supposed to beat.

Look at how close we are to a remarkable record:

We have lost by 1 score to: Rice N. Illinois TCU Texas Texas Tech

If we had a real kicker in any of these games, who knows.

And I'm pretty sure Charlie will have THAT one fixed next year.

didn't we also only lose by one score to OSU?

James Sims is one of the best RB's in the nation that nobody is talking about. Makes his accomplishments even more remarkable considering we have nothing of a passing game to speak of.

Even without the wins, this team has made me proud to be a Jayhawk football fan again. Yes, I get that the national pundits are looking at our record and saying, "See, we told you Weis was the worst hire of last year." But those people only see our record and not the actual games. I would be surprised if any national TV personality--other than those announcing the games--has watched a KU game this year. If they had, they would know this team is making some serious progress.

I think Weis & Co. has done a fantastic job. The kids play hard and they have shown so much heart these last few weeks. I can't wait for Saturday to get here so I can watch an upset of ISU. A win is coming, and hopefully it's this week. It would be a great way to send off the seniors on this team.

Agh. Love the rewind even though every week this season it makes me relive another coulda/shoulda game.

Crazy that for one of the most inept passing offenses in the country, two of our scores were through the air. I don't want to skip ahead, but I'm looking forward to you guys doing a good piece on our upcoming receivers as well. Heaps is going to need good targets and Justin is only one man.

"...but I wouldn't want to be Iowa State this Saturday."

I love that line. Great post. I couldn't have said it better (and I didn't, as shown above).

Jantz had a career day a few weeks ago, can't give him unlimited time to throw. They will come hungry also looking too clinch a bowl bid. W e cannot let down one ounce of intensity.

I agree with a lot of the aforementioned statements. The team is still fighting even with a 1 win record and even with bottom end of the Big 12 talent, we are competing and that is a sign of significant progress considering just last year, we were blown out just about every game.

I've been redundant with this, but we really need to hit the JUCOs hard for some immediate help. WR, DL and maybe OL.

This year's backfield has to be the best in KU history. How many teams have Brandon Bourbon as their fourth-string RB?

Someone as good as Bourbon, that is.

I literally laughed out loud at this for a good solid minute... hahaha

You must be a young one. Many years ago KU had a backfield consisting of Hadl, Curtis McClinton, Bert Coan, and i believe Daryl Schick. KU's best all time back field by far.

Didn't KU have a running back named John Riggins. Hard to believe there has ever been anyone better than Riggins.

Gayle Sayers, aka, the Kansas Comet. Possibly the best ever.

Matt, do you know how our rushing numbers for this game stack up to the leaders in the nation this year? I can't imagine too many players have rushed for 200+ in a game this year. And is there anyone else who has a longer 100+ streak than Sims does?

Am I reading the line correct? ISU is a 6 point favorite!

It was Doyle Schick, the year they won the Bluebonnet Bowl, but had to forfiet cause Bullet Bert was ineligible. Jon Cornish rushed for 112 yards for Calgary who won their CFL p;layoff game Sunday, an entertaining game!

Real proud of our Hawks and I wish I could be there this weekend.

I'm re-posting a question I made on an article that isn't getting any traffic or nobody is interested in talking about this. - why did Weis not challenge the muffed punt against Tech?

It may have just been a mistake on his part but I was curious if there was something I didn't know about what happened?