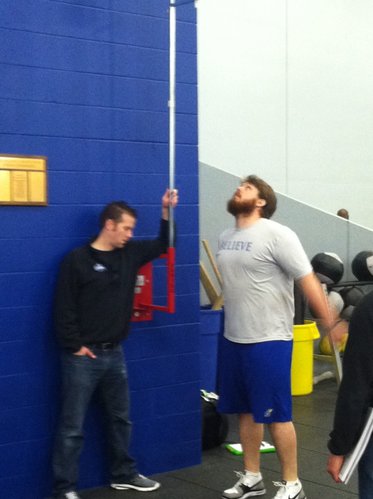 Last year, 11 scouts from the National Football League showed up to watch a dozen or so Kansas University football players put their best feet forward in hopes of earning a spot on a pro team.

Officials from Atlanta, Jacksonville, Kansas City, Green Bay, New England, Philadelphia, Indianapolis, Carolina and New Orleans worked out 10 KU seniors in drills such as the vertical jump, the broad jump, the 40-yard dash and a variety of position drills.

The bulk of the workout took place in the weight room of the Anderson Family Football Complex. After finishing the measurements and testing inside, the players and scouts headed outdoors to the Memorial Stadium turf to run through the rest of the day's drills.

Several Jayhawks performed well enough to open a few eyes. Wide receiver Johnathan Wilson had a great day, jumping 35.5 inches in the vertical test, 10 feet, 2 inches in the broad jump test and running a 40-yard dash in the 4.5-second range.

“I feel pretty good about everything I did," Wilson said. "I feel like my training (after the season) really paid off.”

Senior cornerback/safety Chris Harris also looked sharp, running in the 4.4-range in the 40 and tearing up all of the position drills.

“I’m definitely the best shape I’ve ever been in. I’ve worked really hard. Since we lost to Missouri (the last game of the season), I’ve been training really hard and just getting ready for today. I’m pretty sure we opened some eyes today. I’m just trying to improve my stock. We had a pretty good show in front of the scouts so I’m pretty sure I’m going to hear my named called somewhere.”

Linebackers Justin Springer and Drew Dudley turned in the best performances in the bench press, as Springer hoisted 225 pounds an impressive 26 times and Dudley did 23.

Others who had their day in front of the scouts Wednesday included: defensive end Jake Laptad, who also ran routes at tight end in the late stages of the workout; running back Angus Quigley, who ran a consistent 4.6 in the 40; Calvin Rubles, whose speed in the 4.5-range surprised several people; linebacker Justin Springer; offensive lineman Brad Thorson, who sported a leprechaun-esque beard that he had grown back home in Wisconsin to help him make it through the harsh winter; punter Alonso Rojas, who did a couple of drills and kicked on the field; and defensive lineman Quintin Woods.

The following is a list of unofficial 40-yard dash times from Wednesday's pro day. Each player ran twice. 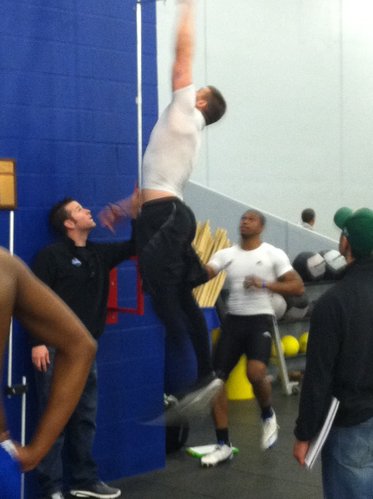 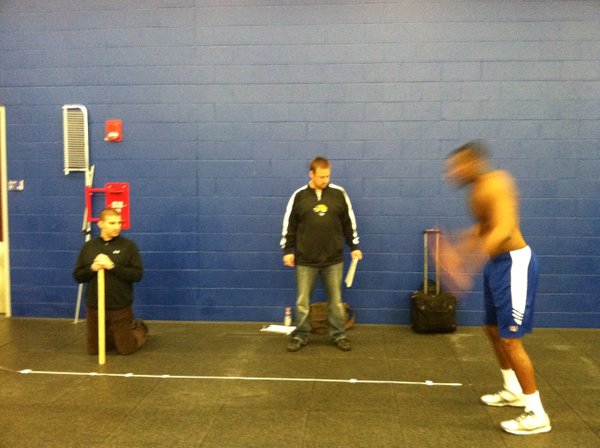 Are there any projections out there yet regarding if any of our guys will get drafted?

Those are hand-timed 40s correct? If so, you should mention it in the article. Listing 40s down to a 100th of a second gives the impression they're electronically timed.

Hand times can be up to 2 tenths off. Could have been a 4.6. His play on the field would indicate he doesn't have 4.4 speed.

Best of luck to Wilson. Dude got screwed this year with all of the offensive troubles.

Speaking of, where is "grandpa"

well you can blame that on the coaches....not on him.