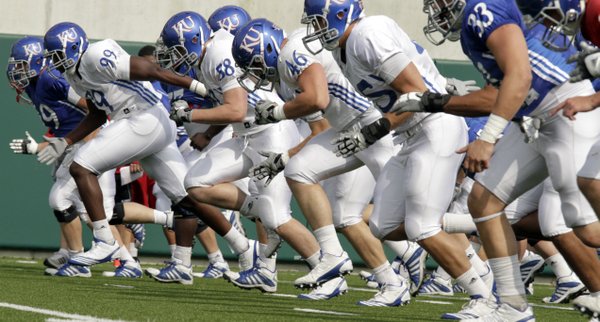 The Kansas football team sprints Monday, April 18, 2011, during spring football practice at the practice fields next to Memorial Stadium. by Kevin Anderson

It’s time. Time to give you some sort of gauge at what the Kansas University football team’s two-deep depth chart might look like 12 practices into the spring.

Remember, this is merely my attempt at constructing something close based on what I’ve seen, who I’ve talked to and what we’ve reported. The Jayhawks have not yet released an updated depth chart. The only one the program has made public was a pre-spring depth chart which had a few “Or” entries, did not include all of the newcomers and was missing second-stringers in some cases. I wouldn’t expect to see them release another one until the end of spring practices.

But I can’t wait that long. And I’m guessing many of you can’t either.

So here goes nothing... 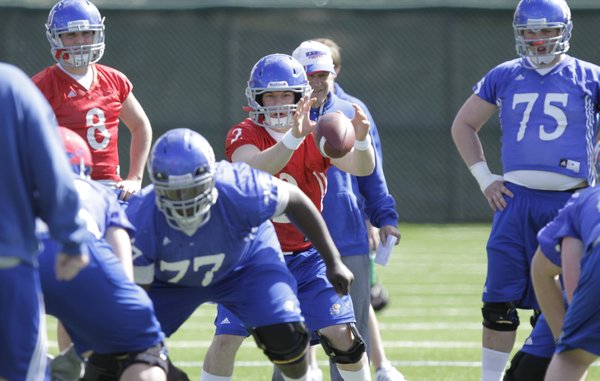 Quarterback Jordan Webb takes a snap as the offense runs through plays during spring workouts at the practice facility on Friday, April 1, 2011. by Nick Krug

Do you think Gill is going to use a fullback at all this year? Have they been running it under center more in the practices you've viewed (compared to last season)?

I think they'll use Sizemore in pass pro situations as well as in motion as a lead blocker. Never hurts to have a good FB in short yardage either.

I think Sizemore will be a big part of the offense this year because I think the offense will be based largely around the running game.

Remember that 60-40 split Gill talked about wanting to see with his offense last year? I think we'll see it this year.

And Sizemore will have a big impact on how successful it will be. Last year a lot of people wondered why they couldn't have just made Opurum a fullback. When you see Sizemore, you'll understand. He's listed at 6-2, 246 and he looks like a monster in the backfield. Opurum (6-1, 240) looks a lot more like a tailback next to Sizemore.

so what you're saying is that even though Opurum and Sizemore have similar height and weight, Sizemore simply has more size.

I am curious about Kevin Young on the D-Line... seemed like he had some positive buzz last year, but I don't see him on your projected 2 deep...

He's still battling injuries and adjusting to the position. He should factor in at some point, but, right now, with Johnson and Williams having experience on him and Lewandowski setting the world on fire, it's tough to find a spot for him.

When he gets healthy and the light bulb comes on, Young could become a great DT.

Thannks Matt... should be interesting to watch all the young guys and see who distinguishes themselves...

Matt, I thought Barfield had an injured shoulder and that's why his tackling suffered.

My bad. Barfield's been out this spring, rehabbing a shoulder injury... It was Tyler Hill (No. 18, not No. 19) who I saw working with the second-team safeties the other day. The jersey was scrunched up when I was watching and I misread it.

Barfield's still at corner and should provide good depth there behind Greg Brown and Tyler Patmon.

Lots of guys will be bumped when the new recruits arrive. Here are some of my guesses (and a sure thing) for the newbies cracking the chart.

I won't disagree with much of that... I think the OL guys will have their work cut out for them simply because of the size difference, but they'll have the talent to earn those roles.

And I'm not sure about WR right now. Probably the biggest question mark on this team. Omigie, McGriff, Matthews, Pick... are any of these guys going to slide in behind Patterson and Beshears or will a young guy have the chance to pass them up right away. There's some talent here and it's going to be fun to watch it all play out.

It is going to be fun.

So much of the WR order is gonna depend on who's playing QB. But I think on raw physical ability alone, Jackson is our #1. When I read scouting comparing his physicality to Dez Bryant it gets my attention. If I were a KU QB this year, I'd make sure I was working out with him the day he steps on campus.

The other advantage Marquis has is power. Even if he had stone hands he'd be on the field a lot because, for a wide receiver, he's a power blocker. And you know we'll be running probably 60/40 this year.

In fact I wouldn't doubt that come fall, I'm reading an article here, on how Marquis may have been our best run-game addition this year. Just a thought.

At this point, that's probably Brock's most likely path to becoming the starter... Gonna be tough for him to win the job in August. You never know, though.

Great article. Thanks for the updates.

Has Patmon made the Jump I expect out of him this year, He's a coaches son, they usually look better there second year ?

Are we still assuming Bakare will not out right win the Weakside spot out ? If not there does he have to potential to line up in Agostinho's gap ?

Clarification on three then.... They clearly want to get Tunda On the field as much as possible then?

I haven't been told that, but I think Bakare's a real talent with great speed and the experience and maturity at junior college should have him poised to produce here.

Gotta see it on the field, though.

I dont remember Lewendowski being any bigger than 240lbs coming in. When did they move him to DT?

248 coming in, but I seem to recall hearing that he put on 30-ish last year. That makes him about 280 and growing, which makes him closer to DT than DE. That also seems to be the approach of Coach Gill & Staff (as well as a # of other programs). Recruit extra DE's, and see who can grow into DT's.

Lewandowski still looks a little undersized out on the field but if he's making plays that's all that matters.

The spring roster still has him listed at 248 lbs so it's hard to know exactly what he weighs now. I'd guess at least 265 and he's probably got 20 or so to go to be a legit D-Tackle.

Nice to hear he's looking good there, though.

It could be that Kevin Young pushed Keba back out. Did you see the recent pics of Young? He's huge. It also could be Lewandowski. Besides if Julius Green put on 30 pounds of muscle, HE might be moving inside. I wouldn't mind those long arms up in the center passing lane.

To me the important thing with our DL this year is depth, not so much who is the starter. If we have enough capable linemen to rotate in and keep the legs fresh, it's gonna do wonders for our defense. Last year we definitely did not have that. This year it looks like we do.

Dorsey, Johnson, Williams, Young, Lewandowski, Green and Keba all appear to be ready to play with a hand in the dirt. Green and Keba are probably interchangeable as the big DE. Michael Reynolds will likely take Sellers' spot behind Opurum and give us a solid backup at every position on the line. I could actually see Reynolds playing opposite Opurum in certain situations.

I think Keba insisted all along he would prefer to stay at DE and planned to do so. We will need 3 good rushers to rotate in the pass happy Big 12 anyway. It may not matter who is listed as starters.

You are correct. I don't think Keba ever wanted to move inside and I'm pretty sure he held out as long as he could to stay at DE. That may be why they moved him back, though I doubt they want to set that precedent for guys not wanting to change positions.