What caught my eye from Day 10 of spring drills 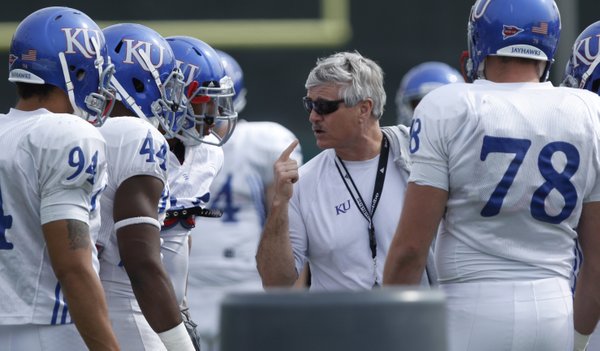 Kansas defensive coordinator Carl Torbush gets in the huddle for some instruction during football practice on Monday, April 18, 2011 at the practice fields near Memorial Stadium. by Nick Krug

We’re getting close now. The Kansas University football team is down to four practices remaining before the annual spring game — 1 p.m. April 30 — closes the book on head coach Turner Gill’s second spring with the Jayhawks.

Monday, after running through their second intra-squad scrimmage of the spring, the Jayhawks ran through practice No. 10 and it was clear from the few minutes I watched at the beginning that the team has shifted gears from simply working on skills and conditioning to beginning to prepare for the season.

A good chunk of the beginning of Monday’s practice was spent working on formations on both the offensive and defensive sides of the practice fields. At the offensive end, offensive coordinator Chuck Long barked out packages and watched his offense quickly line up in front of him. Once the alignment was set, the KU offense snapped the ball and ran, half-speed, through the beginning of a play. On passing plays, the ball never left the quarterback’s hands. On running plays, the backs rarely advanced beyond the line of scrimmage before the whistle blew and another number was called out.

“Twenty,” Long would yell as the team would line up accordingly.

After running that set — successfully — the call would change to “Eleven,” “Twenty-One,” or “Twelve.”

It’s hard to tell exactly what these formations were, outside of the obvious things like some were run with three wideouts, others with a fullback and still more with two tight ends. But making plays was not the point of this session. Lining up properly was. And when someone messed that up, the coaches let ’em have it.

On the defensive end of the field, defensive coordinator Carl Torbush ran his front seven through a similar workout. The KU defense showed all kinds of different looks, a 3-4, a 4-3, an all-out blitz, a fake blitz, etc., and all of it was run at half speed, with the point being only on making sure guys knew what they were doing and lined up in the right spots.

That was different from what we normally see during the first 20-30 minutes of practice we’re invited to watch. Usually, the time is spent on position drills and pre-practice type of warm-ups. Today, it was much more about alignments and assignments, which only made me more ready for some real football.

Here’s a quick look at a few other things that stood out Monday:

Wide Receivers Update — Senior wide receiver Daymond Patterson, who has missed the last handful of practices because of a leg injury, again sat out of Monday’s practice in sweats. Though Patterson participated in some of the warm-ups and stretches, he was held out of the live action. Gill said recently that keeping Patterson out was merely precautionary, and, from the looks of things, it appears as if Patterson is fine, just giving the injury proper time to heal. Though he’s been out of the action, Patterson has been involved in a vocal way, helping the younger guys understand the routes and the sets and doing his best to motivate his teammates. With DP sidelined, Chris Omigie, D.J. Beshears and Christian Matthews looked to be running with the first team offense for most of Monday’s practice.

Knee Brace U? — For the second straight season, the Jayhawks have outfitted their quarterbacks with knee braces on their left legs. KU did this same thing last year and all three quarterbacks who practiced Monday wore the bulky braces as a precautionary measure. As senior QB Quinn Mecham explained, the braces are in place only as a safety measure. “It’s for protection of the ACL during practice,” Mecham said. “We’re not hurt, it’s just a protection think and it’s a great idea, I think.”

Wildcat Update — It appears that there’s more to KU’s “Wildcat” package than originally known. The Jayhawks have not one but two different direct-snap sets in the playbook this year. One of them, “Jayhawk,” is a direct snap to a wide receiver. It could be Kale Pick, D.J. Beshears or Christian Matthews (who got a lot of the reps on Monday). The other, “Wildhawk,” is a direct snap to a running back, most often James Sims, Brandon Bourbon or Darrian Miller.

New Position for Pat — Gill said after practice Monday that red-shirt freshman Pat Lewandowski has been moved from defensive end to defensive tackle. In addition, Gill said Lewandowski, a 6-6, 248-pound lineman from Blue Valley West High, was the one player among all those who switched positions this spring who had stood out the most. Once thought to be a weak and thin position, the DT spot now has as many as six legitimate options. That bodes well for KU to have a productive rotation at the position, but the question about which guys will emerge as starters still remains. Patrick Dorsey and Richard Johnson have logged the most snaps at D-Tackle, while Lewandowski, Kevin Young, Keba Agostinho, and John Williams also figure to get a shot, as well.

Who broke their leg today?

Working on that. No one said a thing about it at practice. Stay tuned...

Brandon Bourbon is the player who was injured... Big-time bummer for him.

Any chance you can get an updated weight for Lewandowski? No way he surivives the Big 12 as a 248lb DT. He's got to be bigger than that.