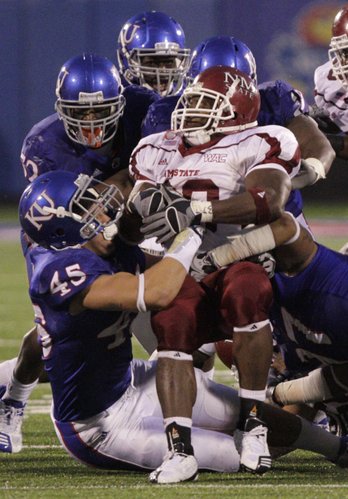 The Kansas defense line stops NMSU running back Seth Smith in the first half Saturday, Sept. 25, 2010 at Kivisto Field. by Kevin Anderson

Well, after four games and one heck of a wacky ride, the Kansas University football team takes a 2-2 record into Big 12 Conference play.

It’s what most expected from this team when going over the schedule in the preseason, though it came in a different way than many projected.

For most, the thought was that the Jayhawks would be 2-2 right now with wins against North Dakota State and New Mexico State. Some saw 3-1 as a realistic goal, with KU knocking off Southern Miss on the road for win No. 3. And next to no one saw KU knocking off Georgia Tech.

But 2-2 it is. In some ways, it’s a shame because, with just a little better effort in the opener, KU would’ve won and the Jayhawks would sit at 3-1 right now, needing to win just three more games to become bowl eligible. Then again, there’s a good chance that this KU team needed that loss to NDSU to find the motivation and drive to pull off the upset against Georgia Tech (who also is 2-2 through four games).

The combined record of KU’s four opponents so far is 8-7, which doesn’t tell you much except that, against a bunch of mediocre teams, the Jayhawks have been pretty mediocre themselves to this point.

Some may point to Saturday’s 42-16 win against New Mexico State as a big win for this team. In some ways it was. They needed a game that was easy and they got it. They needed a game where the offense exploded and the defense was in control and both happened. They needed the game against the winless Aggies to not be close and it wasn’t.

So that’s all good news. But New Mexico State is not a good football team. They’re not big, fast, strong or experienced and they’re probably not going to win more than one game this season. So making any conclusions about the Jayhawks based on this game is a serious mistake.

So forget the conclusions. We still have eight games to watch before we have to make any of those. Let’s examine a few trends that emerged from the NMSU game.

The biggest one, in my mind, was the continued excellent play of James Sims. The freshman running back showed that, if the line can give him creases, he can make things happen. We already knew that he could grind it out, pound ahead for short gains and move the chains. But now we know that if the holes are there he can hit them and then do some special things down the field. This guy is exciting and, again, he’s only going to get better. We’ve seen the complete package from Sims so far. I can’t wait to see what’s next.

Next up is the emergence of D.J. Beshears as a serious playmaker (3 TDs, two rushing and one kickoff return). Junior wideout Daymond Patterson exploded onto the scene against Georgia Tech and KU’s next two opponents focused a big part of their defensive gameplans on taking DP out of the game. It worked. It won’t work much longer. With teams having to account for both Beshears and Patterson, it’s going to be a lot harder to bottle up the KU offense. Sure they might be able to limit the production of one of these two slot receivers each week. But holding both down will be tough. And let’s say for a minute that teams do, well, you’ve still got Johnathan Wilson down the field and, of course, Sims, too. The KU offense is in good shape right now and should continue to take steps forward each week.

Of course, how far and how fast the KU offense moves forward will be tied directly to how well the offensive line plays. Saturday, the line was spectacular and Sims and quarterback Jordan Webb reaped the benefits. Again, though, that was against New Mexico State. It’ll be interesting to see if the O-Line gained some confidence from this most recent outing and uses it to turn in a similarly strong effort at Baylor this weekend.

We’ll give them a pass for losing the Southern Miss game. It was the first road game for so many young guys and, as you may have read, there were a few external factors that hurt KU’s chances in that one. But playing on the road should be nothing new for these guys now and understanding the importance of each and every conference game should be something that’s easy to get.

If the Jayhawks bring the same kind of effort, energy and execution they showed Saturday against NMSU into every Big 12 game on their schedule, the four more wins necessary to become bowl eligible are out there for the taking. If they don’t, Turner Gill’s first bowl appearance with the Jayhawks will have to wait.

I have seen Robert Griffin III for the first time Saturday night, at Rice. He is the real deal. Maybe another Georgia Tech-like game for Saturday? I hope so!

I'm not sure he doesn't throw it better than Nesbitt. Both Quarterbacks make their living by their feet, to this end I expect to see a similiar defense employed.

By my knowledge they do not have the slew of running backs to aide Griffin that Tech has with Nesbitt and Co. This could be an easier team to make one dimensional, especially if we get out to an early lead.

I think the key is quick start for our offense, and having a + turnover differential for the game. Sacks will probably be minimal again because Baylor will probably not throw the ball that much, sound tackling will also be key.

Griffin is, or at least was (pre-injury) faster than Nesbitt, and pretty much anybody can throw better than Nesbitt. But I'd say you're right about the talent surrounding him...it just isn't there. We can win this game, and I sure hope we do...

KU will need to be ready on defense. They cannot come out like they did against SoMiss. Griffin is a very good QB and one of the big differences from Baylor and the Ga Tech game is that Baylor does not spread out their option. This forces the LBs to commit quickly without the help of the CB or safety. This style also opens up the passing game - Baylor loves the slant pass. The LB's and defensive front are key; if the LB's bite on play action and the CBs are in zone coverage - look out. KU's speed at LB, defensive front pressure and disguised coverage will be essential in this game.

Putting njjayhawk's sarcasm aside, my concern is not allowing Griifin to get outside and execute run or pass plays. If we can contain him and if our o-line does its thing, we can win this one!

All very good posts---gives me hope for Saturday. If Torbush pull off another stunner game plan in Waco, the man is worth his weight in gold!

cshjhawk. Good observatrion. It is imperative we contain Griffin. I think we will. TCU held him to practically nothing. Of course TCU is a very good team. Against Rice he rushed 11 times for only 50 yards. He threw 28 times and completed 20 for a total of 268yrd and three touchdowns so he can be dangerous especially with the pass. I understand we are watching a lot of film on him and hopefully the defense coaches can put a clamp on him. We are going to have a big family cheering section there at Waco faor our Jayhawks!!!

Baylor's crowd/stadium won't be any more imposing than So. Miss was. Neither will Iowa St in a few weeks. The only tough road game will be at Nebraska, but otherwise the schedule shakes out really nice.

Concur, but we need one of these "early" road games to set us up for that nebraska Game.... and even the Arrozhead game versus Mizzou... it's always road.

Iowa State's not better than Baylor. We beat baylor and K-state Look Out north.