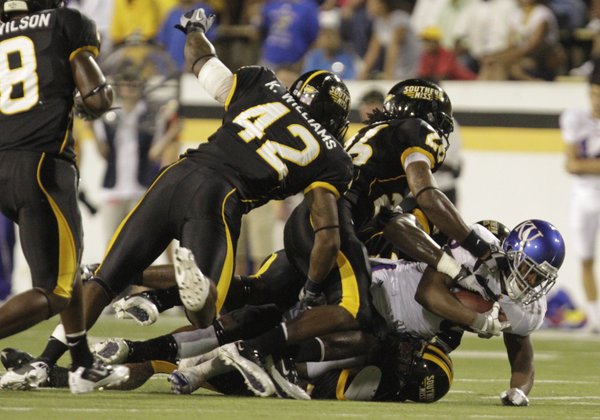 Kansas running back Deshaun Sands falls under a pile of Southern Miss defenders during the first quarter, Friday, Sept. 17, 2010 at M.M. Roberts Stadium in Hattiesburg, Mississippi. by Nick Krug

The Kansas University football team learned a few things about itself during Friday’s loss at Southern Miss. The question, however, is if the Jayhawks learned enough.

Most of what KU learned was stuff we already suspected. The offensive line is struggling; the quarterback, though tough as nails, is still very, very young, and this team can’t make mistakes and expect to win.

Shortcomings in all three of those area really hurt the Jayhawks in Hattiesburg, Miss., and turned a winnable game into another long night. The offensive line could not protect QB Jordan Webb and KU coach Turner Gill and the Jayhawks are going to have to find a way to change that if they hope to progress at all on offense this year. If that means keeping more men in to block — be it an extra tight end or an added running back — then so be it. If that means changing personnel or even blocking schemes, that’s fine, too. Whatever Gill and company believe is right is what they need to do in order to allow an offense packed with potential to take the next step forward.

Same goes for the special teams, which, in just three games already has given up two blocked punts. That’s a lot for a season, let alone a few weeks. If it’s personnel, that’s easy to fix. Every team has guys willing to step up and take on a little more responsibility for the good of the team. Former KU coach Mark Mangino always believed in putting his best players on special teams because he deemed the third phase of the game to be so critical night after night. Maybe it’s time the new coaching staff follows suit.

As for Webb, just a red-shirt freshman, he played a gutsy game on Friday, most of which was spent running for his life. But that doesn’t excuse all of his poor throws or the fact that, at times, he still seems unaware of when the pocket is closing in around him and holds the ball too long. He knows that. The coaches know it, too. And the only thing that can eliminate it is time. Webb is simply too inexperienced to look like a polished quarterback out there. As long as he’s taking steps forward each week instead of moving in the opposite direction, he’ll be fine.

Speaking of Webb, he also was a big part of what went right for the Jayhawks in this one. Finally, after three games, we know that Webb is the Jayhawks’ starting QB. If he weren’t, Gill would’ve surely gone to backup Kale Pick for a spark on Friday night. But Pick never set foot on the field, which means the coaches are willing to let Webb develop and are comfortable calling him “the guy.” That will only help the rest of the team, which now can move forward knowing which voice they’ll be hearing in the huddle all season.

Like Webb, freshman running back James Sims further cemented himself as this team’s top back. Though his numbers were not jaw-dropping and his runs not nearly as effective as the week before, Sims looked very solid yet again on Friday night, carrying the ball 20 times for 74 yards. He was patient when he needed to be, hit the holes hard when he could and showed that does have enough speed to make defenses pay when he gets to the second level. Watching Sims improve each week — not to mention become more comfortable — is going to be a joy no matter what things look like on the scoreboard.

Defensively, the Jayhawks talked an awful lot about feeling good about their positioning on Friday. Many KU defenders believed they were in the right spots most of the night but that poor tackling and a general inability to rise to the occasion and make a play when one was needed was what cost them. Save for Phillip Strozier’s impressive interception, that’s a very accurate assessment of things. But them being in the right places and in position to make plays is a good sign. If they can keep that up, the rest will come because actually making the play is more about attitude than anything else.

Not the best effort Friday night but not one worthy of working yourselves into a frenzy. The bottom line is this: Had the Jayhawks not lost the opener to NDSU, this loss wouldn’t have looked as bad. Since they did, though, the loss instantly brought back the sour memories of that season-opening shocker.

But KU played hard and took a couple of steps forward on both offense and defense. They were just beaten by a better team. It happens.

Now, it’s time for the Jayhawks to be the better team and handle a New Mexico State squad that’s also going to be playing hard this Saturday at Memorial Stadium.

Great recap. And not only did So. Miss. look like the better team, they were definitely the faster team. A lot of those missed tackles seem to be a result of their players moving too fast for our guys to get a hold of them.

I have heard a lot of D cordinators say, "Go make the tackle, don't let the tackle come to you." and what I saw Friday night was defenders waiting and by the time they reacted, it was to late.

your fourth paragraph is a good observation. If we have to put more tight ends in to block, do it. Foster is a huge full back. He does a good job blocking. He was used one time last game. Put him in more for protection of Webb and also the punter.

Hey Tait, if you ever have the opportunity, can you ask our Special Teams coach his philosophy on the formation for our punts? I am curious as to why so many college teams now line up with three guys behind the line versus the old way (and the NFL way) of having everyone on the line. Or maybe this is something Newell can do with his Coach during his breakdown column. I am just interested in the pros and cons of those two formations.

Good article with which I generally agree. However, I only saw backward steps from the prior week against G-Tech. But, I did not expect our young team to keep up that level of play this early in the season. Hopefully, we will bounce back this Sat. and start going forward again.

I'm still greatly concerned with the apparent communication lapses from the sidelines to the field. The issues with wasted timeouts getting certain players in-and-out, not getting plays called, etc. If there is confusion in these areas, what other misunderstandings are occurring during the game and in the game prep.
We talk about blocking and tackling fundamentals, how about these fundamental requirements? Or is this not a problem?

Don't think Webb was very good, should of had at least 4 interceptions. Webb's throws were short and wild at times. Line played poorly for Webb in this game and Pick in the first game. Pick had to play without Hatch at center and Capra at left guard in the fisrt game,thought Pick was hit harder in game one. Game plan in game one was flat bad,game two was improved and game three not to good. I believe Gil keeps Webb in the So. Miss. because Gil doesn't want to look so wishy-washy.Pick got his chain jerked way to fast,he is to good to be disgarded this way. I would say the same if Webb was jerked that quick in his first starting game.

I believe TG owed Pick a chance late in that game. You are right, that clearly Webb is the guy now or Pick would've gotten that chance.

I thought Pick played one series early in the game.