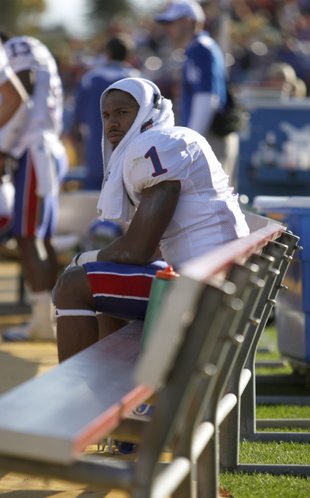 Kansas safety Lubbock Smith sits on the bench during the final moments of the Jayhawks' 28-16 loss to Iowa State Saturday, Oct. 30, 2010 at Jack Trice Stadium. by Nick Krug

Four games to play and the Jayhawks must win them all to become bowl eligible.

OK, OK, OK.... We all know that’s not going to happen. Heck, if they did win them all, they might end up ranked.

Let’s snap back to reality for a minute here and rewind to last week’s loss at Iowa State, where Kansas gave a much better effort but fell, 28-16.

The game was not on television so, as one of the few people around these parts who got to see it live, I understand that this rewind might be as interesting as any of the others.

So let’s begin with the positives, of which there were several.

For starters, the Jayhawks showed up to play from the opening gun. On offense they were sharp right away, with Angus Quigley and James Sims running the ball effectively up the middle and junior quarterback Quinn Mecham providing good pace. That pace and pounding style did not lead to many points — no touchdowns and three field goals — but it was good enough to put the Jayhawks in the game. They actually had a lead at the half (9-7) for just the second time all season.

Giving out blanket credit for the great start would be wrong. Mecham, Sims and Quigley all were solid during the first two quarters, but no one played better than the Jayhawks’ interior linemen. Center Jeremiah Hatch and guards Sal Capra and Duane Zlatnik whipped the Iowa State defensive line, pounding away to create gaping holes that the Jayhawks easily gained four, seven and 10 yards a pop on. It was by far the best game for the KU offensive line and it came against a good opponent.

In the second half, things went south, as ISU coach Paul Rhoads made the necessary adjustments at halftime to neutralize KU’s attack and the Cyclones’ offense got rolling. Kansas was outgained 218-15 in yards from scrimmage in the third quarter alone. Tack on three ISU touchdowns, one coming on a long run and the other two coming on long drives and the game was basically over.

KU kept fighting until the end — which is more than we can say for them in most games this season, which means progress was made — and tacked on a late touchdown to make the final margin more respectable.

The bottom line is this: The Jayhawks played better — much better. But they still made too many mistakes, mental and physical, to win the game.

Once again, the special teams killed them, giving up a punt return for a touchdown in the second quarter that surely looked worse on film Sunday when the team was forced to rewatch the two or three missed tackles that could have prevented the score.

What’s more, the coaching staff’s inability to adjust its gameplan to counter the masterful adjustments made by the Iowa State staff was a discouraging sign. It was as if the KU coaches were so thrilled with having the upper hand in the first half that they could not recognize what Iowa State changed in time to do anything about it. I’m sure they tried. But that’s just another bad sign.

Overall, it was one of the Jayhawks’ best games of the season and I say that largely because of the strong first half. Had that team been the one that showed up against Baylor, K-State and Texas A&M, the scores would not have been nearly as embarrassing as they were. Instead of falling 55-7, 59-7 and 45-10 in consecutive games, KU’s losses likely would have been more in the ballpark of the 28-16 setback at Iowa State. Had that been the case, I’m sure people would have been a lot more forgiving and a lot less displeased with Gill and Co.

In the end, though, Saturday’s game — for all its high points — goes down as another loss and pushes the Jayhawks’ conference losing streak to 11 in a row.

Will there be relief on Saturday, when Colorado, the team that started the skid in 2009, comes to Memorial Stadium? If the KU team that played in Ames, Iowa, shows up Saturday, there just might.

I guess everyone has move on to basketball?

Not sure about multiple crickets, but there might be a single cricket.

I agree that we did not adjust to ISU's half time adjustments.

Has Kansas made any positive adjustments all year?

As always, thank you for the excellent football coverage - and moreso now that we are less than 24 hours away from the first men's basketball game.

I talked to ISU graduate from Des Moines who was at the game. He thought ISU was in a hangover mode after the Texas game when playing KU.He said ISU gave KU a short feild due to turnovers and a lack of energy in the first half. He said ISU felt lucky to be down 9-7 at half time with such a poor effort and execution on offense. He knew ISU would play better in the second half.He said KUs offense was not very good in a polite way, to easy to defend. He was pissed that ISU gave up the TD late in the game against ISUs 2nd and 3rd stringers. He thought the referees scewed ISUs defense on two 3rd down pass interference calls he thought were clean to keep KUs drive going. He said ISU fans are excited about their coach. He said their coach is a local boy with local ties. ISU went to and won a bowl game last year in this coaches first year with ISU .

Yeah I believe it's called a trap game. Hung over from ut and looking ahead to nu.