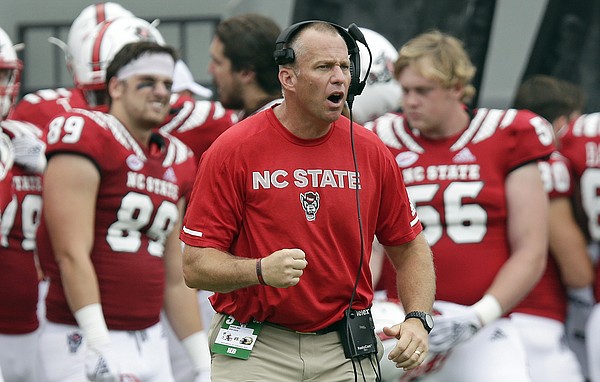 The results are in, voting has closed and the Kansas football fan base has made its choice for the program’s next head coach.

On the final day of voting in our KU Football Coaching Search Bracket, in what may be considered a mild upset by some who have been following along, North Carolina State head coach Dave Doeren defeated former LSU and Oklahoma State head coach Les Miles by the slimmest of margins — 51% to 49%.

Perhaps Miles’ backers within the KU fan base were too busy wondering about flights from Lawrence to Baton Rouge, La., that never materialized to remember to vote in the finals. Or maybe the bulk of our readers just plain prefer Doeren, a former KU assistant (2002-05) who grew up outside of Kansas City.

Either way, KU’s athletic director, Jeff Long, would be fortunate to be able to hire Doeren away from N.C. State — though doing so in reality would include a hefty $6 million buyout.

Currently in his sixth season with the Wolfpack and eighth as a head coach, Doeren, 46, led N.C. State to just its sixth 9-win season in school history in 2017, capping the year with a Sun Bowl victory over Arizona State.

Doeren is 63-37 as a head coach with a 40-33 mark since moving to N.C. State from Northern Illinois. His final team at Northern Illinois was 12-1 and received an Orange Bowl bid before Doeren moved on to the ACC.

It all comes down to this.

After dominating their competition in each of the first four rounds, former LSU and Oklahoma State coach Les Miles and North Carolina State coach Dave Doeren are the only two candidates remaining in our fan-driven KU Football Coaching Search Bracket.

The athletic director at the University of Kansas, Jeff Long would consider himself fortunate if his finalists turn out to be as good as these two.

And, realistically, Long would find himself in a pretty enviable spot if he had a shot at hiring either of the other two coaches who cracked the bracket’s Final 4.

But now that the pool has been whittled down to the two football coaches who most intrigue the KU football fan base it’s time for you to get this fictionalized contract with your favorite candidate finalized.

Fans have all day Tuesday to vote for the champion, so to speak. 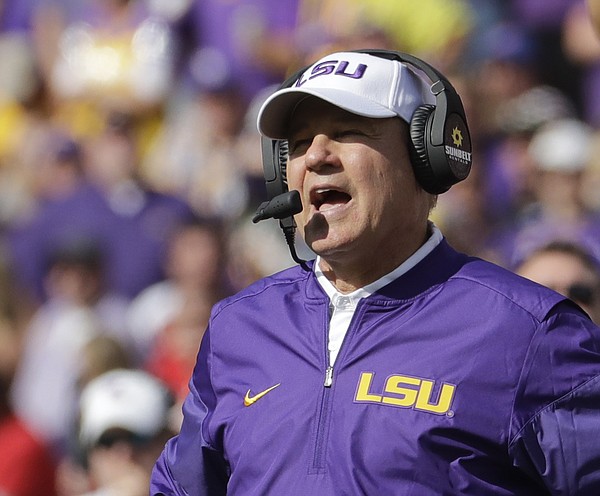 Miles won 114 games and lost 34 over the course of 11-plus seasons with LSU. He was voted Coach of the Year by the AP in 2011, following his second SEC championship and a 13-0 start to the season. Miles’ Tigers won the national championship in 2007.

His name continues to be the most popular reportedly tied to Long’s search, which is officially in its second week.

Now in his eighth overall season as a head coach, Doeren has won 63 of 100 games and guided his teams to five bowl appearances — with another one on the way this year.

Unlike Miles, of course, Doeren is an active head coach, currently preparing his Wolfpack (6-3, 3-3) for a Saturday matchup with floundering Louisville.

Whether Long considers Doeren a candidate or would seek him out to fill KU’s vacancy is unknown at this time.

The search for the Kansas football program’s next head coach is nearly complete — at least as far as our online bracket is concerned.

Each of the top four seeds in the 32-candidate field survived the first three rounds of fan voting at KUsports.com, leading to a chalk semifinal round.

Les Miles. Jeff Monken. Dave Doeren. Seth Littrell. Only two of them can move on.

The other two will have to take the same exit route as some very experienced, talented coaches who already have been removed from contention.

It’s safe to assume most KU football fans would actually be pleased if any of those four coaches knocked out in the quarterfinals actually ended up in charge. But in this head-to-head endeavor, even candidates Athletic Director Jeff Long still may be considering are out of the mix.

We’ve reached the Final 4 in our KU Football Coaching Search Bracket, and you, the program’s fans, get to decide which contenders are worthy of the championship round.

Here are our two semifinal matchups. Make your selections throughout Monday. Voting for the title round, which determines the people’s coaching choice, will follow on Tuesday. 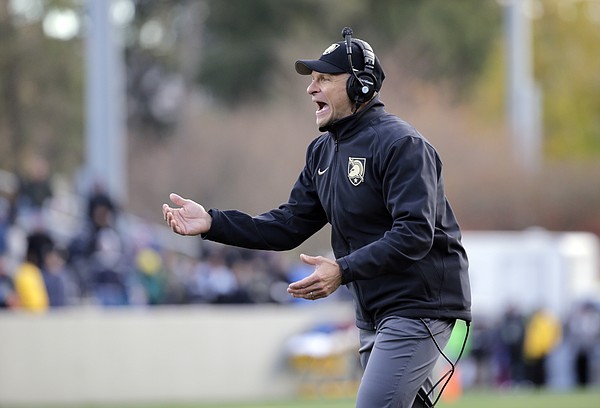 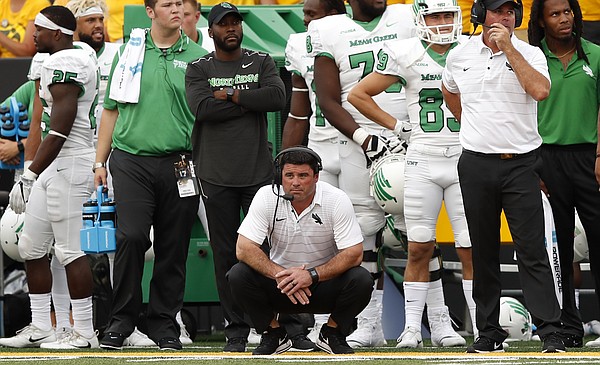 And then there were 8: See who’s still alive in KU football coaching search bracket

How close we are to reaching the finish line in Jeff Long’s search to find the Kansas football team’s next head coach remains to be seen.

But here at KUsports.com, our tournament-themed quest to land on the best possible candidate is humming right along.

Some coaches with serious promise and/or experience didn’t survive the second-round voting.

It’s now Day 3 of our KU Football Coaching Search Bracket, and you, the program’s fans, have trimmed the list of candidates down to eight. The tightest Round 2 matchup was between Tulane’s Willie Fritz and Houston’s Major Applewhite, with the veteran Fritz edging the young Applewhite, 51% to 49%.

Thus far, the top seeds from each region, Les Miles, Jeff Monken, Dave Doeren and Seth Littrell, remain in the mix as we’ve reached the regional final round of our interactive hunt for the Jayhawks’ next coach.

Here’s the rundown of our Round 3 matchups. Make your selections Friday, and Final Four voting will begin on Monday. 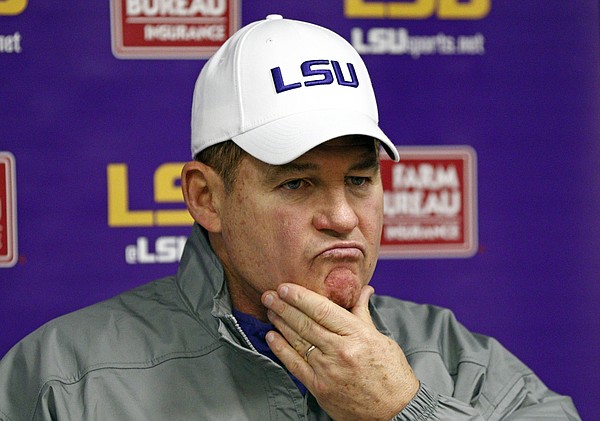 Whether the next head football coach at the University of Kansas turns out to be Les Miles or someone else, the man charged with turning around the Big 12’s worst program seems more likely to be long in the tooth than one of college football’s up-and-comers.

Ideally, athletic director Jeff Long wants KU football’s next leader to arrive in Lawrence well-versed in all that goes into running a college program.

Theoretically, the coaches who have been around the game the longest would be most equipped to deal with whatever unforeseen challenges pop up at KU.

How exactly would KU’s AD view a candidate’s age — as a positive or negative — while searching for a replacement for David Beaty, 48? Long was asked one such question during his press conference earlier this week.

“Well, by federal laws I’m not allowed to have age be a factor in my search,” Long was quick to point out.

Through his next words, though, it seemed the athletic director wouldn’t mind hiring a coach who was closer to the retirement stage of his life than his football playing days.

“Age, you’re only as young as you feel,” Long said. “I feel a lot younger than my 59 years — it’s hard for me to believe it when I say it. But it’s not about age and years. It’s about energy. It’s about passion. It’s about commitment. It’s about eagerness to get out and turn the program.”

The most prominent name tied to KU’s job opening the past several days, former LSU and Oklahoma State head coach Miles also happens to be the oldest candidate being mentioned among Long’s potential hires, theoretical or otherwise.

Miles turns 65 on Saturday and hasn’t coached in a little more than two years, when LSU fired him four games into the 2016 season, despite his .721 career winning percentage and national championship with the Tigers.

Currently the defensive coordinator and inside linebackers coach at Oregon, Jim Leavitt, 61, has spent the better part of the past four decades in college football. True, Leavitt hasn’t been a head coach since 2009, but he did leave South Florida with a 75-44 record and five straight bowl appearances to close out his run there.

A three-time FCS national champion as head coach at North Dakota State, Craig Bohl, 60, is now in his fifth year at Wyoming. Bohl's Cowboys are currently 4-6, and they’re 26-35 since he took over in 2014. Still, it’s his stellar 104-32 run over the course of 11 seasons with North Dakota State that makes him an intriguing coach for a Power Five program in KU’s position.

A few other names featured in our 32-candidate coaching search bracket at KUsports.com are approaching 60.

Tulane’s Willie Fritz, 58, worked his way up through the ranks. This year marks his 26th as a college head coach and 22nd in charge of a Division I or Division II program. Fritz has Tulane at 4-5 this year. He’s 31-27 over the past five, thanks to an 18-7 mark in two seasons at Georgia Southern, before he moved on to Tulane (13-20).

Now the receivers coach at Michigan, former Florida and Colorado State coach Jim McElwain is 56. The Florida job, like most in the SEC, is a beast, often accompanied by unrealistic expectations. McElwain led the Gators to a 10-4 record in 2015, 9-4 in 2016 and then was fired at 3-4 in 2017. Previously, he went 22-16 in three seasons at Colorado State.

Considering what KU football has endured since Mark Mangino was forced to resign following the 2009 season, any of those veterans, grizzled or not, signing on with Kansas would signify a change for the better.