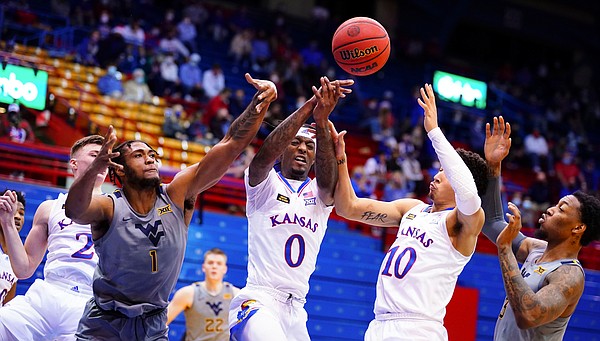 Kansas didn’t win its top 10 matchup with West Virginia Tuesday night at Allen Fieldhouse just by making 3-pointers. The No. 3 Jayhawks actually found a way to beat the No. 7 Mountaineers with missed 3-pointers, too.

Sure, an assertive 16-for-37 display from beyond the arc set the stage for KU to comfortably win its final basketball game on the 2020 calendar, 79-65. But so did the Jayhawks’ newfound ability to pile up second-chance points by tracking down long misses.

The offensive glass is an area where Bob Huggins’ Mountaineers typically rule. But the same KU team that went to Texas Tech five days earlier, secured just six offensive rebounds and got outscored 16-5 in second-chance points, looked a lot more active in discarding West Virginia. The Jayhawks tracked down 19 offensive boards against WVU’s burly front court and bested the visitors at their own game, outscoring them 25-14 in that specialty category.

“The 3-ball helped us win, because we made them,” KU coach Bill Self said after his team improved to 8-1 overall and 2-0 in the Big 12. “But the 3-ball also allowed us to offensive rebound, because long shots mean long rebounds, and now block out and size don’t become a factor. It’s basically being lucky a little bit and it’s also running down loose balls. And we did a great job of running down a ton of long misses.”

During his postgame video press conference, Self guessed of the 21 missed KU 3-pointers, the Jayhawks got 10 of them back on the offensive glass. Not too shabby. He was only off by one.

KU actually extended a possession with an offensive board after a missed 3 on 11 different occasions. And 16 of the 25 second-chance points the Jayhawks produced came after a missed 3.

“We thought 50-50 balls and long rebounds would be a key,” Self said. “And it turned out to be pretty important for us.”

The work of three Jayhawks in particular stood out on the offensive glass, as Ochai Agbaji and David McCormack each hauled in six and Jalen Wilson seized four more.

Their efforts allowed the Jayhawks to easily outperform their offensive rebounding production from their first four games against ranked opponents. Against Gonzaga, Kentucky, Creighton and Texas Tech, KU never scored more than 11 second-chance points and averaged 8.0 per game. The Jayhawks only managed five offensive boards versus Gonzaga, had 13 against Creighton, and finished with the aforementioned six at Tech. When KU had 19 offensive boards versus Kentucky, those came on a night when the Jayhawks shot a season-worst 29.9% from the floor and missed 47 field goal attempts.

Facing a WVU team that has led the nation in offensive rebounds each of the past three seasons might have inspired the Jayhawks to prove themselves in that category, too. Both teams finished with exactly 19 offensive rebounds.

While Self described his team’s inability to limit WVU’s second chances as “awful,” McCormack called KU’s rebounding handiwork on the other end of the floor “major” after the win.

“We know that West Virginia crashes hard offensively and defensively. And we knew if we could try to beat them on the glass or at least get a lot more second-chance shots that would put us in a big advantage,” McCormack said. “It was just being aware of the type of team that we’re playing and how they play. We were more cognizant that we needed to crash the glass, which opened a lot more opportunities.”

Self wouldn’t describe these Jayhawks as a great offensive rebounding team around the rim, namely because they only have — at most — one traditional big wedging for position inside when shots go up.

But there might be something to this whole extending possessions off missed 3-pointers idea. Self thinks Agbaji, Wilson and Christian Braun (the same three who happen to be KU’s best 3-point shooters) can bring an active approach to the offensive glass with a running start and add another positive to KU’s approach.

“And they’ll be better offensive rebounders if we shoot more 3’s. I’m not saying that’s the strategy we’ll use every game,” Self made it clear. “But in this game it was obviously pretty easy to try to do, because they played zone.” 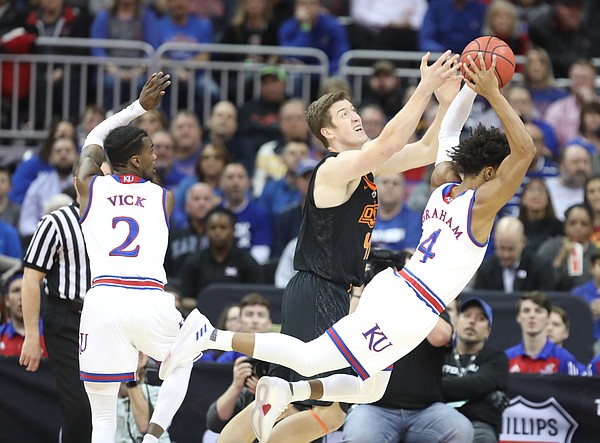 Kansas guard Devonte' Graham (4) yanks a rebound away from Oklahoma State forward Mitchell Solomon (41) during the first half, Thursday, March 8, 2018 at Sprint Center in Kansas City, Mo. by Nick Krug

Wichita — In order to get past Seton Hall and reach the Sweet 16, top-seeded Kansas will have to either thwart or survive one of the Pirates’ best offensive sources: rebounding their own misses.

“I always say it’s like he’s got a magnet in his hands,” Pirates senior Desi Rodriguez said. “The ball’s just attached to his hands when he’s rebounding the ball.”

“Obviously he’s a great offensive rebounder, knows how to wedge, and box out really well. We’ve got to figure out how to keep him off the glass,” Lightfoot began, before saying the guards around Delgado benefit from his presence, too, crashing and finding angles to track down misses. “They’re a load to box out.”

Player after player in the KU locker room at Intrust Bank Arena mentioned how much Seton Hall (22-11) reminds them of West Virginia, with their physical style of play and tendency to thrive on the offensive glass. WVU averages 14.0 offensive boards and rebounds 34.6% of its misfires. The Pirates’ offensive rebounding percentage of 32.2% ranks 36th in the country.

When KU senior point guard Devonte’ Graham watched video of Seton Hall, though, he saw a style similar to another Big 12 foe in the Pirates’ game.

“That’s a little bit of the physicality that we had to talk about, going ahead and rebounding. They go to the glass just as good as anybody in the country — kind of like Oklahoma State,” Graham said, “in how physical their guards can be and how big they are.”

The Cowboys, who beat Kansas twice during the regular season, average 12.6 offensive rebounds and come away with 32.5% of their missed shots.

The Jayhawks (28-7) have enough experience facing teams that make a living on the offensive glass to know how costly opponents’ second-chance points can be.

Senior Svi Mykhailiuk noted KU will have to play tough and put a body on someone on every defensive trip down the floor.

“And like the guards gotta help Mitch and Silvio (De Sousa) and just to box out, because I don't think everybody's on the glass like the point guards,” Mykhailiuk said, “so they just gotta come inside and just help him to rebound.”

With Udoka Azubuike on a minutes restriction, KU won’t have its most consistent defensive rebounder much of the game. But sophomore guard Malik Newman, who has come away with 5 or more rebounds 20 times this season, is more than capable of pitching in and making things easier on Azubuike, De Sousa and Lightfoot.

“I come into every game thinking that if I can get out and rebound then it will help the team,” Newman said, “because now we can start our break and we can play fast. That’s coach’s biggest emphasis. He always wants us to have fun, play with confidence and play fast.”

Throughout the season, Bill Self’s team has faced seven opponents that are similar to Seton Hall from an offensive rebounding standpoint.

KU went 1-2 against Oklahoma State, 3-0 versus West Virginia, 2-0 in matchups with TCU, 1-1 in meetings with Baylor and picked up non-conference victories over Kentucky, Syracuse and Texas A&M. That’s a 10-3 mark overall versus strong offensive rebounding teams.

Lightfoot said Delgado reminds him a little bit of both Sagaba Konate and Kenrich Williams in his pursuit of missed shots. So can the Jayhawks reference the success they’ve had in those matchups and others as they prepare to take on Seton Hall and Delgado?