The Los Angeles Lakers’ second-round draft pick from Kansas put up 15 points and knocked down three of his 6 3-point attempts in his exhibition debut Monday night at the California Classic, in Sacramento, Calif.

The smooth shots from beyond the arc couldn’t have surprised anyone, but the flashes of athleticism from the 6-foot-8 guard likely opened the eyes of those who didn’t follow him closely with the Jayhawks.

Mykhailiuk finished strong above the rim on a couple of occasions during L.A.’s 98-93 loss to Sacramento at Golden 1 Center. One of his dunks came in transition, but another materialized in the half court.

The Kings’ Justin Jackson flew at Mykhailiuk when the Lakers rookie caught a pass on the wing, and the 21-year-old Ukrainian blew past his defender and rose up for a powerful two-handed jam before No. 2 overall pick Marvin Bagley III could think about contesting it.

“That I can shoot real well gives me more opportunities to go to the rim,” Mykhailiuk told reporters afterward, “because people are going to close out on me hard, and I think I have good enough handles to go to the rim.”

It seemed the early-summer scouting report on Mykhailiuk might not have accounted for his agility and bounce — even though Sacramento guard and former KU teammate Frank Mason III (16 points, nine assists) could’ve warned the Kings.

“I think they might change later,” a grinning Mykhailiuk said of opponents’ expectations for defending him. “But it is what it is.”

The defense swarms on the outlet pass leading to a breakaway slam for Mykhailiuk! #LakeShow (📺: @SpectrumSN & NBA TV) pic.twitter.com/mrPH0ilyij

His comfort level wasn’t inhibited by the NBA 3-point line extending a little more than a foot farther back than the college arc.

“Yeah, it’s not that far,” Mykhailiuk said. “But it’s just a little bit of an adjustment, and I think I’ll be fine.”

Wagner, who has known his new Laker teammate since their days of matching up in Europe, expected Mykhailiuk’s shooting display.

“That dude doesn’t miss,” Wagner said. “I’m not surprised. It’s fun to be on the court with him.”

A Mason 3-pointer (he made two of three in the win) ended the Lakers’ chances in the final minute.

“We lost — that’s not a good thing — but I think we competed hard,” Mykhailiuk said. “They made tough shots in the end and I think we’re gonna be better tomorrow.”

The Lakers’ other KU rookie, Malik Newman, missed the opener due to a left foot sprain. 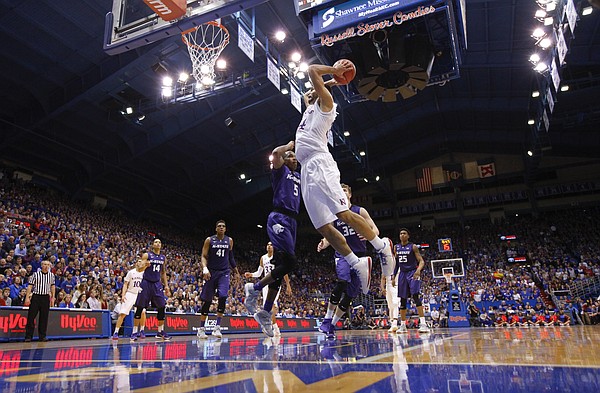 Kansas forward Perry Ellis (34) pulls back for a two-handed jam over Kansas State guard Barry Brown (5) during the second half on Wednesday, Feb. 3, 2016 at Allen Fieldhouse. by Nick Krug

Four years worth of work with Kansas basketball wasn’t enough to get Perry Ellis drafted into the NBA. Now the 22-year-old forward has a few days in Las Vegas to secure a spot in the league the hard way.

A free agent playing for the Mavericks’ summer league entry beginning Saturday night, Ellis will try to convince the same coaches and executives who passed on him on draft night that he actually belongs on a regular-season roster.

Right now, the people Ellis needs to impress the most are Dallas head coach Rick Carlisle and owner Mark Cuban. The Mavs’ Vegas team will focus on the development of second-year wing Justin Anderson and second-round draft pick A.J. Hammons, a 7-foot center out of Purdue. However, while speaking to media members earlier this week, Cuban made it sound as if the other summertime Mavericks won’t be an afterthought for the organization.

“We’ve got a bunch of roster spots,” Cuban said Wednesday, in a video posted on the Mavs’ website. “We put our money where our mouth is in cap room, so there’s a lot of spots for guys to make, and they know if they do what we expect them to do, probably three guys, maybe four, from this group are gonna make the team.”

Cuban made that statement as Ellis and other Dallas hopefuls worked behind him. It has to be a strange dynamic for all the players except Anderson and Hammons. The rest are not only trying to play well, but also, in a sense, beat out the guys next to them for a coveted roster spot or training camp invite.

So who is Ellis playing with/competing against? Here’s a look at the rest of the Mavericks’ Vegas lineup, excluding the aforementioned Anderson and Hammons:

Dallas hasn’t retained undrafted rookies from its summer teams of late, but if what Cuban said is true, this year could be different.

Ellis, a 6-foot-8 All-American who averaged 17 points and shot 53.2% from the field in his senior season at Kansas, surely understands the scope of what he could do for his professional career in the days ahed. 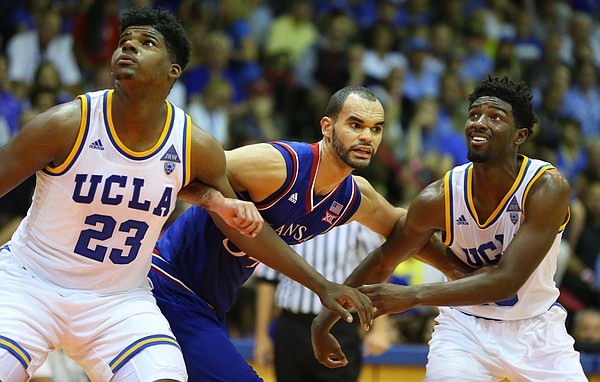 “You know, I’m just going to come out here and play hard,” Ellis told the Mavs’ website. “It’s a great opportunity for me. You know, it’s an honor to be here, and I just want to go out here and just play my game and play with a high energy.”

It sounds as if Dallas expects Ellis to fit in nicely with this makeshift unit that spent the past few days practicing together. The Mavericks’ summer league head coach, Jamahl Mosely, hailed the Jayhawk’s college résumé as a strength that should help Ellis and the Vegas version of the Mavs.

“He’s played a great amount of basketball,” Mosley said on the team’s website. “I mean, he played four years in college, and he’s very experienced. He knows how to play the game, so I think that’s going to be a big key for us. He knows how to play, he’s in the right position, and he makes the simple and easy play.”

Regardless of what transpires on the floor in Vegas, the Mavs likely won’t need any of these free agents to play critical roles in their regular-season rotation. But Cuban appears more inclined to give one or more of them a roster spot than he has in the past.

“We want to have a good crew of young guns that we develop,” the Dallas owner said.

If Ellis fits in as seamlessly as Mosley suggested and goes on scoring tears like he did at KU, the Wichita native just might land a spot in the NBA next season after all. And Ellis knows how significant this business trip to Las Vegas will be for his future. His first game is Saturday night against Miami (9 p.m., NBA TV).

In typical Perry Ellis fashion, he said his main focus for his summer league experience will be to play well and play hard.