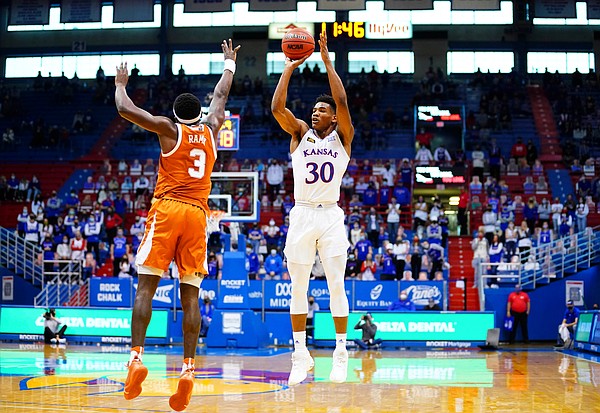 Kansas guard Ochai Agbaji (30) puts up a three over Texas guard Courtney Ramey (3) during the first half, Saturday, Jan. 2, 2021 at Allen Fieldhouse. by Nick Krug

Texas outplayed Kansas in every way imaginable Saturday at Allen Fieldhouse, where one of the biggest swings in the No. 8 Longhorns’ dominating 84-59 victory came behind the 3-point line.

The No. 3 Jayhawks were non-factors from long range, connecting on a season-low three 3-pointers. Their inability to match the Longhorns’ energy in the top-10 battle proved as costly in this category as everywhere else on a day that UT buried 12 of its 26 shots from deep.

KU (8-2 overall, 2-1 Big 12) finished 3-for-23 from downtown, and the Jayahwks’ usually reliable shooters were missing what few shots they could find before the visitors began pulling away and KU started hoisting them out of desperation down the stretch.

“They got out on shooters,” junior guard Ochai Agbaji said after he went 1-for-6 on 3-pointers, making KU’s first of the game in the final minute of the first half, before the Jayhawks went 2-for-16 from beyond the arc in the second half.

Agbaji credited the Longhorns (8-1, 2-0) with turning KU shooters into drivers. But the problem was UT effectively made them one-dimensional, as the drives didn’t lead to anything else.

“We didn’t make the right adjustments in this game to counteract (UT’s initial 3-point defense),” Agbaji said, “and get the ball moving on our offense then.”

Before the team’s winter break, KU caught fire, hitting 16 of 37 3-pointers while beating up West Virginia. The Jayhawks opened the new year looking far less comfortable as shooters, and that’s because of UT’s personnel and approach. KU’s previous season-low for 3-pointers came against North Dakota State (4-for-15). But what transpired Saturday looked much more like KU’s 5-for-21 3-point night against Kentucky.

Three-pointers don’t look so open when the defender closing out is taller and longer, and can reach farther into that shooting window more quickly. UT’s defenders made those shots appear far less inviting. And they executed defensively to boot.

“They pre-switched a lot of stuff,” Bill Self said during his postgame video press conference. “I thought they did a really good job. They defended us a lot like Baylor did the first time we played them last year (KU went 4-for-15 that day in a home loss), and we didn’t really have any answers for them.”

Added Self: “I thought Texas did a terrific job guarding us the entire game, regardless of if it was 3-point shooting or not.”

As Agbaji pointed out, though, there are ways KU could have countered Texas’ superior 3-point defense.

“We just have to keep staying aggressive, not going away from the three-ball. But also looking at different things — taking it inside, getting fouled,” Agbaji gave as some examples.

KU doesn’t have the type of perimeter players to consistently beat their Texas counterparts one-on-one. The Jayhawks tried that route too often. The better option would have been something Self has tried preaching to them lately.

“We didn’t drive to pass at all. No matter how much we’ve emphasized it,” Self lamented.

The Jayhawks, who entered the game averaging 9.2 made 3-pointers an outing, could have created more quality looks for their best shooters — Agbaji, Christian Braun and Jalen Wilson — if they had attacked closing out UT defenders by driving inside while looking to kick it out, as Self has stressed of late.

There was no juice to anything the Jayhawks did on either end of the court versus Texas, with their 3-point shooting failing to give them boosts throughout a challenging matchup with the lengthy Longhorns.

This KU team isn’t going to beat high profile opponents scoring so infrequently from long distance. This may not be an elite 3-point shooting team, like Self so often has insisted this season, but the Jayhawks have to get their fair share of scoring from beyond the arc. They don’t have to rain down 3-pointers on opponents game in and game out, but they need to cash in enough to keep defenses honest and create the spacing that will benefit drivers, as well as bigs when they get their touches inside, near the rim.

David McCormack can’t carry this team offensively — particularly against long and athletic front lines. And while Marcus Garrett is as good as a defender as you could hope for at the college level and a solid distributor, the senior entered Saturday’s game averaging just 9.4 points per game this season. It’s not wise to hope for an offensive spark out of him.

KU’s offense almost always needs to revolve around some combination of attacking and 3-point shooting from Agbaji, Braun and Wilson.

There was little fight to be found in anything the Jayhawks did versus Texas, however, including in the way KU defended UT’s 3-point shooting.

“That was a game where as poor as we played,” Self said, “they outscored us by 27 from the arc. And we can’t let that happen.”