Jayhawks should learn from Baylor’s masterful defense of Udoka Azubuike 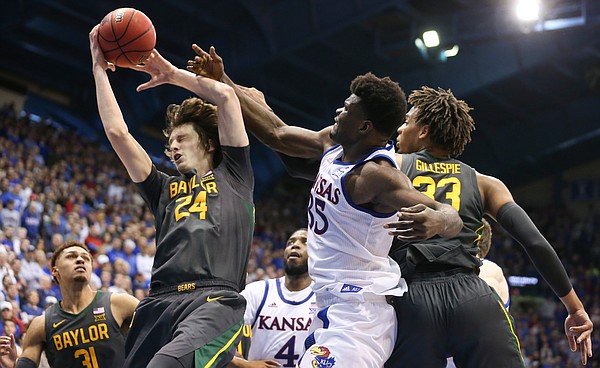 Baylor Bears guard Matthew Mayer (24) comes away with a rebound from Kansas Jayhawks center Udoka Azubuike (35) during the second half on Saturday, Jan. 11, 2020 at Allen Fieldhouse. by Nick Krug

Baylor wasn’t the first team this season to scheme a game plan around taking away Kansas center Udoka Azubuike. And especially after the Bears’ win at Allen Fieldhouse, they won’t be the last.

Sticking to a Baylor blueprint, though, will be more easily devised than executed for future opponents in search of the best formula to knock off the Jayhawks.

KU usually outscores its opponents by double digits in the paint (plus-15.9 points per game this season), and Azubuike helped the Jayhawks do that in 11 of their first 14 outings. But when Baylor won the battle for high-percentage points, 28-26, and beat the Jayhawks, 67-55, it became just the second opponent to outscore KU inside.

The 7-footer’s teammates, as head coach Bill Self bemoaned on Monday, didn’t get Azubuike the ball enough. And sometimes they simply couldn’t.

“I think, you know, we're a team that as much as I would like to say that we have no holes or weaknesses, we do,” Self said, “just like everybody, for the most part does.”

Baylor fronted Azubuike in the post and then kept a well-placed help-side defender in position to either sneak in and knock away any pass over the top, or just discourage a passer from even trying it. That wasn’t a new defensive look for KU’s guards or go-to 7-footer to navigate. But the Jayhawks weren’t able to force the Bears out of it as they had other teams.

“They were able to take away things that allowed us to get Dok easy baskets by throwing over the top and things like that. And then, you know, they did a good job playing to scouting reports,” Self began, while explaining how BU proved so effective defensively. “Say what you want — those guys can really guard. And they pressured us and they didn't let Marcus (Garrett) and Devon (Dotson) get downhill. And then you put the ball in other guys’ hands to try to make some plays and they're not quite as good at doing that.”

Therein lies the problem for upcoming KU opponents. They can definitely try and replicate what Baylor (13-1 overall, 3-0 Big 12) pulled off. But do they have defenders on the perimeter who are strong and smart enough to swing it?

West Virginia — like Baylor and KU — appears to have one of the best defenses in the country, but the Mountaineers could only make Azubuike go missing offensively for a half. Perhaps Texas Tech (ranked No. 11 in adjusted defensive efficiency, per KenPom.com, where WVU is No. 2, KU is No. 3 and BU is No. 5) will be able to implement something as effective. But to do that so well for so long seems like a tall task for the rest of the Big 12.

And, really, KU (12-3, 2-1) could have solved Baylor’s defense with some better awareness on entry passes to the largest man on the floor.

Few of KU’s guards, as Self pointed out, are precise passers when it comes to feeding the post, or throwing lobs for dunks for that matter. But there are other ways to get Azubuike the ball.

Garrett, a capable driver and passer, is the most likely Jayhawk to keep opponents from sticking with the BU scheme that surrounded Azubuike. Garrett is crafty and persistent off the bounce, and he should be able to get to the paint, draw the defense to him and set up Azubuike. The Bears’ guards were too sound defensively for either Garrett or Dotson, KU’s two best ball handlers, to make that happen.

Sophomore KU big David McCormack said it’s “definitely” safe to anticipate other teams trying to copy what Baylor did. We’ll see Tuesday night at Oklahoma (11-4, 2-1) whether Lon Kruger’s Sooners (No. 62 in KenPom’s defensive rankings) can put it into practice.

McCormack also expects Self and his staff to put the Jayhawks in position to counter those looks they know are coming.

“We know how to either go around it, play around it, or defeat its purpose,” McCormack said.

The Jayhawks head into every game banking on defenders attempting to limit the overpowering Azubuike (78.3% from the field during his senior year). Now they’ll have to learn from Baylor’s defensive mastery and make sure no other opponent so brilliantly accomplishes that again.

David McCormack on how KU is handling its first Big 12 loss by KUsports.com