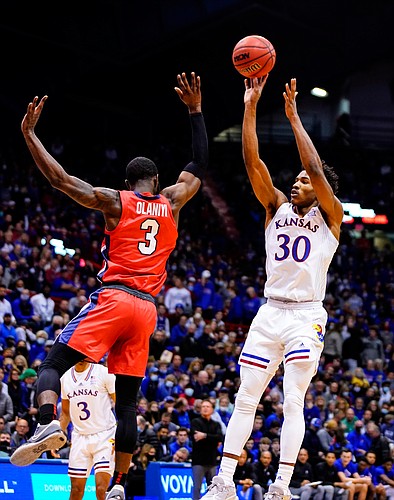 Kansas guard Ochai Agbaji (30) elevates for a shot over Stony Brook guard Elijah Olaniyi (3) during the first half on Thursday, Nov. 18, 2021 at Allen Fieldhouse. by Nick Krug

What can you learn about a powerhouse team playing its third game of the season — at home, against a team ranked No. 201 by Kenpom, no less?

Probably not a ton. But you can make some rash declarations about what transpired.

Suspended for getting a DUI, Jalen Wilson hasn’t even played for the Jayhawks yet. Remy Martin tweaked his back recently and only played 18 minutes in KU’s 88-59 win over Stony Brook. But the game still had moments worthy of disproportionate responses.

They are as follows:

Would KU have lost this type of game last year?

OK, maybe not. But it probably would’ve been a grinder that the Jayhawks eventually won by 10 or 12 because they showed up to the game with better players.

Point being: they didn’t have to ugly their way to a win after Stony Brook gave them a tough first half. And that’s because this season KU has an offensive player who can put a team on his back.

This year’s Ochai Agbaji is nothing like last year’s. And junior year Agbaji wasn’t that bad.

Senior year Agbaji (25 points vs. SBU) wills his way to the rim against weak opponents and strokes 3-pointers (4-for-11) anytime an open look comes his way.

Most importantly, even without Martin (0-for-2 in 18 minutes), the Jayhawks weren’t worrying about being able to weather whatever storm the Seawolves brought, because Agbaji’s playing at such a high level that it gives the whole team confidence.

Shouldn’t a freshman big man’s minutes actually go down with Wilson about to return to the lineup?

Hey, what type of rational question is that?

Zach Clemence is too uniquely skilled to ignore or get buried on KU’s bench.

The 6-foot-10 modern big has made at least one 3-pointer in each of his first three games in a KU uniform, and he put up 11 points in just 12 minutes vs. SBU.

Clemence is playable, too, on both ends of the floor. He will need to get a lot stronger in years to come to be more impactful inside, but he was almost always in the right position defensively Thursday night. Plus, Clemence has the footwork to defend a big facing up or trying to take him off the bounce.

Then there’s the real reason KU needs to play him: that smooth stroke from behind the arc. Clemence fires away like he’s convinced the ball’s going in every time it leaves his hands. He went 2-for-4 against Stony Brook. He even looked like a veteran filling the lane on one fast break, and then spotting up on the left wing to knock down a 3.

Clemence is a stretch-5, and that makes him unique — even on this deep and talented roster.

Christian Braun should assert himself offensively

Obviously, Christian Braun could’ve gone scoreless and KU still would have had no problem winning this game.

But especially on a night when Martin wasn’t in the mix as a scoring threat, it was surprising to see Braun only took five shots — he went 4-for-5 and scored 11 points.

Braun, a junior who is going to play a ton of minutes this year because of his intangibles, is going to be needed offensively some nights in the near future. If there are games when Agbaji and/or Martin are in foul trouble or just don’t have it going for whatever reason, the Jayhawks will need someone on the perimeter to step up.

With 38 career starts and the ability to live up to Bill Self’s expectations on both ends of the court, Braun should be KU’s third-best scoring guard.

And he’s trusted enough — and knows how to play the right way — that no one is going to call him out for taking too many shots or anything like that.

As nice as Zach is to have this year, it’s exciting to think of him and Martin both being threats from the new age 5 outside next year.

Gotta love CB being 4-5, especially when so many others can come in and get baskets too.