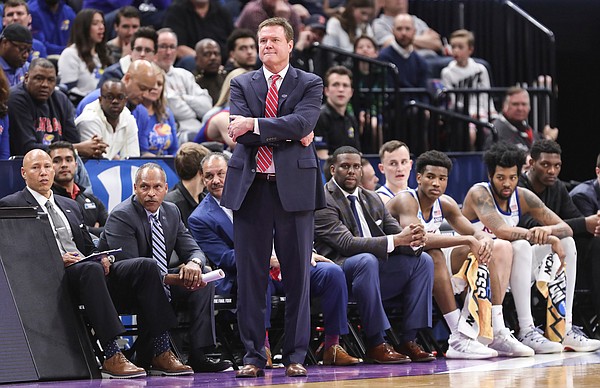 Kansas head coach Bill Self and the bench watch in silence during the first half on Saturday, March 23, 2019 at Vivint Smart Homes Arena in Salt Lake City, Utah. by Nick Krug

As his Kansas basketball team geared up this week for an inherently pressure-packed situation, playing in the win-or-your-season’s-over NCAA Tournament, head coach Bill Self pondered the importance of the moment — not just for his program, but the entire athletic department. From Self’s point of view, the current state of affairs aren’t accompanied by any additional stress.

KU is currently without an athletic director, as the aftermath of a buried sexual harassment scandal at LSU led to the departures of both KU football coach Les Miles and the man who hired him, Jeff Long.

More bad news hit Jayhawk land over the past couple of weeks, as positive COVID-19 tests on the basketball team led to the department’s flagship program withdrawing from the Big 12 tournament. It turned out only three players caught the virus, so KU was able to head to Indianapolis, just not at full strength.

All the while, players have been holed up in hotel rooms, first in Kansas City, Mo., and now in Indianapolis, isolating much of the time, when they’re not practicing, getting tested for the virus or having a socially distanced team meal or meeting.

And though this didn’t come up with Self during his video conference call with reporters, the Jayhawks still don’t know what the ultimate ramifications of the looming NCAA’s infractions case against the program will be. Will KU even be eligible for March Madness a year from now?

Self, in his 18th season at KU, will no doubt compartmentalize all the factors that don’t immediately impact his team this weekend and leave them in the background to focus on the task at hand.

After all, the last thing his Jayhawks need right now is more pressure.

When asked about the importance of this tournament, given some of the news in the athletic department, Self said his team’s March Madness run “does mean more in that context.” He just doesn’t view that as an extra burden.

“I look at it as it’s an opportunity to gain,” Self said. “Not a situation where you can lose.”

Self’s been a fountain of positivity throughout this challenging season, and he isn’t changing his tone at this stage. The good vibes (and some defensive buy-in) helped the Jayhawks (20-8) survive a five-loss January and come out on the other side of it not as a defeated team, but an improved one. It was back then, Self said, that the Jayhawks had pressure on them.

Not only did they pull through a genuine longterm mental test to stake their claim as one of the best teams in the Big 12, the Jayhawks head into Saturday’s matchup with underdog Eastern Washington (16-7) having gone 8-1 down the stretch, undoubtedly contributing to Self’s upbeat outlook.

“This team has far exceeded what a lot of people thought,” he said. “We weren’t very good at all for a good period of time. And these guys have flipped it and really committed.”

Self and KU haven’t lost in the opening round of the tournament in 15 years, dating back to when in back to back postseasons No. 14 seed Bucknell busted KU’s bracket in 2005 and No. 13 seed Bradley did the same in 2006.

But the current state of KU’s roster will make this weekend uniquely challenging for even Self, who has been to the NCAA Tournament as a head coach every March (except for 2020, of course — RIP to one of KU’s best chances to win it all again) since he took Tulsa dancing in 1999.

The Jayhawks are without their best rebounder, starting forward Jalen Wilson, and even though David McCormack, after being cleared to rejoin the team, is expected to play, the big man’s minutes might be minimal.

They call it March Madness for a reason — see: No. 2 seed Ohio State falling to Oral Roberts (where Self began his career as a head coach) in the first round on Friday. Crazy outcomes are a staple of the format. The consensus best team in the country often fails to cut down the nets. Teams with brand recognition like KU go home at the hands of Who’s That U underdogs every March.

And now Self will try to stave off an upset with a shorthanded rotation and what is likely to be a lot of small ball lineups.

“We can’t control what our roster looks like and everything. We expect to play well. We expect to advance,” Self said. “But I don’t feel the weight of the world on my shoulders that we’re carrying around more of a burden than what we would’ve carried if wasn’t such a strange year.”

If KU can get through EWU, the roster might start looking closer to normal in the days ahead.

That’s one of Self’s hopes at least. He also aims to lead the players on a run, extending their stay in Indianapolis.

“I want it for them. And I also want some good things to happen for our school and our athletic department,” Self said. “I know this would be a way to do that. But it’s not an extra weight. It’s not anything that I feel a pressure that we have to do something.”