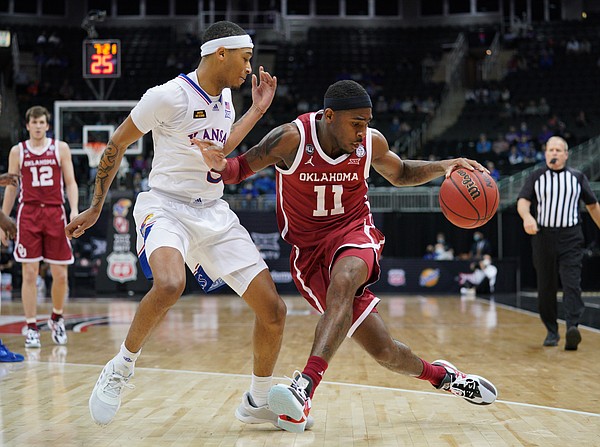 So much has transpired since Kansas last played a basketball game that it’s almost easy to forget the Jayhawks are entering the NCAA Tournament with a newfound super-sub in point guard Dajuan Harris.

As recently as mid-February, the redshirt freshman played a limited role at best, and on the season Harris logged single-digit minutes in nine of KU’s games. But just as the Jayhawks began laying the groundwork for the most important stretch of the calendar, Harris emerged as an influential member of the rotation.

KU at least got in one Big 12 tournament game in Kansas City, Mo., last week before its COVID scare forced the No. 2 seed to withdraw. And while it would’ve been even better for Harris to experience more March pressure in a conference semifinal and final, too, the 6-foot-1 backup, listed at 160 pounds, didn’t look intimidated by the postseason stage against Oklahoma.

In fact, Harris proved to be one of the best players on the floor in KU’s most recent game. And he didn’t just do it with his intuitive passing and ability to set up teammates. For a stretch of the first half, Harris’ defense stole the show as he kept picking OU’s pockets.

“Dude, he’s everywhere,” KU senior Mitch Lightfoot marveled after Harris came away with four steals and proved to be a pesky defender. “He impacts everything.”

Harris only played nine minutes in KU’s win over Baylor. But in the two games since then the Jayhawks have taken off with Harris on the floor. In KU’s regular season finale versus UTEP, the Jayhawks outscored the Miners, 51-33, during Harris’ 24 minutes of playing time. And UTEP held a 29-16 advantage during the 16 minutes that Harris sat.

Against a much tougher team in their postseason opener, the Jayhawks again benefited from his presence in a Big 12 quarterfinal win over Oklahoma. During Harris’ 29 minutes, KU outscored the Sooners, 56-43. When Harris was on the bench, though, OU held the upper hand, 19-13.

Lightfoot praised Harris for his defensive activity, and pointed to one post-up by OU forward Brady Manek as an example. Lightfoot was defending Manek and didn’t even know in the moment that Harris was on his way to help Lightfoot trap one of OU’s top offensive threats.

“We got a steal and it led to a bucket,” Lightfoot said of Harris’ instinctive decision. “The guy played his butt off and I’m really happy for him.”

As KU (20-8) enjoyed one of its best halves of the season during the first 20 minutes against OU, the Jayhawks had Harris in large part to thank for their 35-15 halftime lead.

KU head coach Bill Self said Harris “was everywhere,” and disrupting OU’s offense with his hands and defensive awareness.

“He was arguably the best player in the game in the first half,” Self said.

Harris’ final stat line read: four points, five assists, four steals, two rebounds and thee turnovers, with 2-for-2 shooting. But his impact was much larger. Self loved how Harris moved the ball on offense and took an active approach to everything he did.

“I guess the little guy, you always want to see the little guy do well,” Self said. “I really love watching Juan play when he’s aggressive. And to me, he’s not that much fun to watch when he’s not. So I love his activity level when he gets those hands going. He’s probably the best on our team as far as hands go.”

With Jalen Wilson out for KU’s NCAA Tournament opener versus Eastern Washington on Saturday and David McCormack and Tristan Enaruna returning to the team just ahead of the first-round game in Indianapolis, the Jayhawks will likely need to lean on role players such as Harris, Lightfoot and Bryce Thompson even more.

Harris, never a player to worry about how many shots he’s taking, not only fits in perfectly, but also set himself up to succeed when KU will need him by heading into The Big Dance on an upswing.

Ochai Agbaji has known Harris dating back to before their time as KU teammates, as both came up through the MOKAN AAU program. So Agbaji wasn’t surprised to see the redshirt freshman begin to take on an important role just in time for March Madness.

“That’s how he’s always played, just being that pass-first (point guard),” Agbaji said. “His feel for the game has been like that.”

Dajuan has most definitely improved recently. In the Texas loss, he was brilliant in the first half, but got "sped up" in the second. Though it may not have cost Kansas the game, the three empty possessions amid missed shots by Harris, and one subsequent Texas fast break dunk and one, allowied Texas to close to within one point. After Harris was taken out he didn't play again in regulation or the overtime period in which KU was outscored.

Juan has most certainly played within himself and the game has slowed down for him lately, just as it has appeared to do for David McCormack.

We got ourselves a real PG in Juan. He plays with freedom, isn't afraid to make mistakes. He didn't even realize how much bigger Manek was - that's a 'no-fear' attitude no one can teach that. He's amazing. I'm really excited this kid is special. He will make KUMBB fun to watch again. I'm pretty sure he can produce 10-15 points a game. Just watch. Juan is just getting warmed up. Go Juan! Go Hawks!!!!!!!