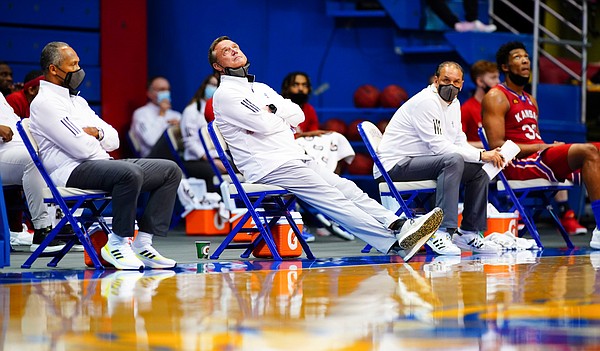 Kansas head coach Bill Self watches the video board as the Bears cut into the Jayhawks' lead during the second half on Saturday, Feb. 27, 2021 at Allen Fieldhouse. by Nick Krug

One of these years — one would hope — the Kansas basketball team will actually get to experience a complete weekend at the Big 12 tournament again.

The pandemic improved to 2-0 against the Jayhawks in Kansas City, Mo., with Friday’s news of a positive COVID-19 test on the KU roster, a year to the day after the pandemic canceled the 2020 conference tournament.

According to the picture head coach Bill Self painted on Friday afternoon, though, COVID isn’t expected — again, one would hope — to keep KU from competing in the NCAA Tournament. March Madness is going to actually take place in 2021, whether the Jayhawks are participating for the 31st consecutive time or not. But Self said he expects the Jayhawks (at least the ones who have been testing negative) be cleared to participate in Indiana, where first round games begin as soon as this coming Friday — seven days after KU was forced to bow out of the Big 12 tourney.

Self will no doubt make sure the Jayhawks jump through all the necessary isolating and testing hoops as the team sets up camp in Kansas City, Mo., hoping to come out of this controlled environment before it heads to Indianapolis to enter another controlled environment for the Big Dance. The lockdown in the days ahead will have to be even more intense than whatever the parameters were recently, leading to KU’s current predicament.

It’s easy to say this now, with the virus creating a whole new kind of March upset for KU, Duke and Virginia this week, but the administrators in charge of planning the conference championships and NCAA Tournament could’ve made everything run a little more smoothly by building in even more time than usual between the end of conference tournaments and the start of The Madness.

Or they could’ve opted to simply not play any conference tournaments at all. At best, these postseason showcases for leagues were risky and unnecessary. But canceling conference championship week was never going to happen with so much TV money to be made, and universities throughout the country taking catastrophic budget hits in the wake of the sports landscape getting blown up in 2020.

Maybe the Jayhawks weren’t as lucky as we initially thought to make it all the way to March without an interruption in a 2020-21 college basketball season marred by such instances. Because as much as the Jayhawks were happy to play a full Big 12 schedule and not encounter the headaches of rescheduling or a midseason reboot, the timing of their first COVID-related pause in competition couldn’t be much worse.

Hopefully no team that makes it to Indianapolis for the NCAA Tournament will have to do what KU, Duke and Virginia did this week and withdraw due to a positive test. But the fact that it has happened to three renowned programs at this time of the season would suggest a team dropping out of the title chase in Indy might be inevitable.

Surely the Jayhawks, gutted by having their chance of cutting down some nets this weekend taken away from them, will keep that feeling in mind and take every extra precaution imaginable to ensure they don’t have to exit an even larger stage abruptly.

Perhaps we should’ve seen this coming, given the week of turmoil surrounding Kansas Athletics that led up to the basketball team’s withdrawal from the conference tournament. The unceremonious exits of the football coach and athletic director didn’t do much for KU’s karma.

But with Selection Sunday on the horizon, so too is a new week. And perhaps some renewed focus and luck for the Jayhawks.

Maybe it’s the three bad things. Self has certainly generated as much bad karma for this program as anyone could, it’s too bad that the players have to pay the price.

Lighten up on Brett. He just misses his Mommy.

well, donnie trump did the bashing enough on himself. when you perform that poorly as a leader/president, it's just a given people are going to dump on you. (PS I'm no democrat, can we stop with the party division)

To bring us back to basketball... Here's hoping the chaps can stay in mental and physical shape somehow, do a little justice to last year's circumstance, and bring us back to a sweet 16. When the team is hitting on all 8 cylinders, we have a good chance of beating nearly anyone in this sweet nation of ours.

-Jay (good to be back. Thanks Bryce for getting me to shake the comment-dust off ;) )

Brett If Self is not found guilty you are going to have to leave this board and never come back. I'd be worried if I was you because it just might happen. Don't know why you hate self, it's like what did Beatty have against Carter Stanley, but then haters are haters, that's what they do.

Taking every precaution possible assumes that it could be that simple. In a perfect world with perfect tests that would be true. Unfortunately, that’s not where we live. While it’s not been well documented - doesn’t fit the mantra, just KU has documented several instances this year of false positive test results, though others have as well. False positives aren’t anything new, but the lack of any discussion/assumption of perfect testing is just mind numbing.

Are you somehow under the assumption that they don't take a rapid test if they are asymptomatic and test positive in order to make sure it's not a false positive? If that's you're assumption then that's much more mind-numbing than the lack of discussion that false positives exist.

Do without the conference tourney is interesting second guessing. It would seem more relevant if all the teams had played a full season. Less so when some don’t. Also less so given OSUs place in the finals from the bottom of the seeding. I’m loving it.