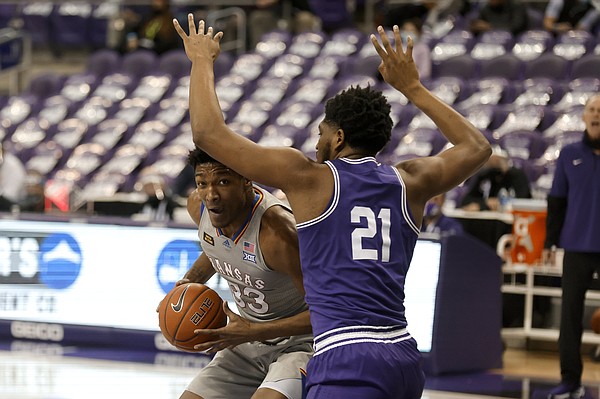 Kansas forward David McCormack (33) works to the basket against TCU center Kevin Samuel (21) in the first half of an NCAA college basketball game in Fort Worth, Texas, Tuesday, Jan. 5, 2021. (AP Photo/Ron Jenkins) by Associated Press

Look at where David McCormack’s shot attempts came from in his season-high scoring night at TCU earlier this week, and it’s not surprising that the Kansas veteran big man enjoyed his most productive offensive game to date.

KU’s junior pivot scored a season-best 20 points — marking the second time in his college career he put up at least that many — on 7-for-9 shooting. His 77.8% field goal percentage put him above 50% against a Division I opponent for the first time this season.

McCormack, who in the Jayhawks’ first 10 games averaged 3.0 shot attempts at the rim, while attempting 5.4 per game from farther out, made a habit of doing damage deep inside the paint versus the Horned Frogs.

Of course, McCormack helped himself out by not settling for midrange jumpers. He went 4-for-4 at the rim (another big positive, considering he entered the week shooting below 50% from point-blank range this season), and 3-for-5 away from the rim. Even better: McCormack only took two shots that were from outside the paint — three if you want to be a stickler and count an attempt from around the right block.

Earlier this week, Bill Self called McCormack’s showing at TCU “dominant.” On Friday, ahead of the No. 6-ranked Jayhawks’ home game versus Oklahoma, KU’s head coach said his starting big man played to his size in the rout of TCU.

While praising McCormack on a number of fronts, Self pointed to the junior’s low post positioning and the job he did making himself available for passes deeper in the paint than normal.

“That takes some physicality to do that. I just thought he played to who he is,” Self said, referencing the measurements of the 6-foot-10, 250-pound man, and putting an emphasis on the word man while describing his player.

Although McCormack has endured some subpar offensive games so far, Self said he rarely is disappointed in the big man’s effort.

“I think sometimes guys can try really hard and give really good effort, but it doesn’t look like they’re doing it because they’re a little out of whack in some form or fashion or their balance is off, or technique’s off some, or whatever,” Self said. “I think David for the most part has always given great effort.”

In his first couple of seasons at KU, McCormack often played sped up. As Self referenced, it wasn’t that he wasn’t trying. Now the Jayhawks need him to harness his energy on offense by carving out good position inside for himself on a regular basis.

“I do think he’s got to do some things from a technique standpoint that allow him to create opportunities to get easy baskets,” Self said. “And I thought he did that (at TCU). And when he was in position to get them the other day, I thought he did a better job of finishing or demanding the ball or put himself in positions where they had to throw it to him.”

“All it is is just throwing the ball in there,” sophomore guard Christian Braun said of how KU can keep finding success scoring inside. Braun said McCormack and the other bigs are “more than capable” of scoring.

McCormack now has proven an inside-focused offensive approach can boost his productivity (10.5 points per game through KU’s first 11, fourth on the roster). And making a point to take the ball up strong inside should make even better use of one of McCormack’s strengths: his free-throw shooting.

No one’s asking McCormack to average 20 points a game. But putting a priority on taking more of his shot attempts inside will make him a more effective and efficient scorer — especially if he can increase his 4.0 free throw attempts a game in the process.

In KU’s first three Big 12 games, McCormack was trending in the wrong direction offensively, shooting 7-for-23 (30.4%) and averaging 8.3 points. He proved at TCU a different line of attack can make him far more impactful.

Love that he went strong to the hoop and got freebies in the process.

Something that has seemed overlooked in all the coverage though was the total nonfactor that Samuels (& Miles) was in the game. David was dominant on both ends of the floor and in every way.