Jayhawks still struggling to finish around the rim 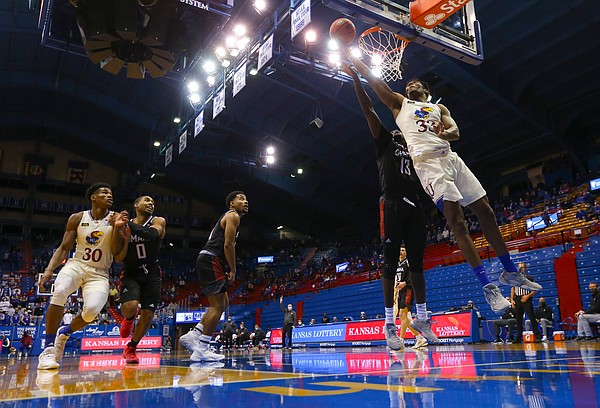 Kansas forward David McCormack (33) gets inside for a shot off the backboard past Omaha forward Wanjang Tut (13) during the second half on Friday, Dec. 11, 2020 at Allen Fieldhouse. by Nick Krug

As this Kansas basketball team steadily proceeds toward March, the Jayhawks could make their path to Indianapolis and the NCAA Tournament a little easier by continuing to address an issue that has plagued them throughout their first 10 games.

Even in victories, the Jayhawks consistently missed some of the most desirable shots they took — the ones around the rim.

Entering this week, KU as a team was averaging just 12.5 makes a game on 21.9 attempts from point-blank range. The Jayhawks’ 57.1% success rate on layups, dunks and such, per hoop-math.com, ranked 252nd in the nation through games played on Jan. 3. Every team in the top 100 in that category is converting 63.8% of the time or better.

The Jayhawks’ issues with finishing around the rim emerged immediately this season, in their first couple of games, and they haven’t gone away.

Ahead of Tuesday’s game at TCU, KU head coach Bill Self had plenty of reasons to present when asked why he thought his Jayhawks haven’t fared better when they’re taking shots close to the basket.

“We don’t have guys that play above the rim,” Self began.

In recent seasons, of course, KU feasted off of the length and power of Udoka Azubuike (144-for-169, 85.2% at the rim in 2019-20) inside. While these Jayhawks aren’t blessed with such a dominating big man, as Self pointed out, they don’t exactly have the same types of guards who can get to the paint and finish layups like they did in the past, either — he dropped the names of Frank Mason III, Devonte’ Graham and Devon Dotson.

“And I think a lot of times our shot selection’s poor, too,” Self added.

KU’s coach didn’t call any players out for their shot selection. But in the Jayhawks’ first 10 games, one player in particular — starting big David McCormack — took nearly twice as many attempts away from the rim than he did near it.

McCormack hasn’t yet become a consistent scoring threat inside (14-for-30, 46.7% on shots at the rim), but he’s making himself even more of a strain on the offense by settling for even lower-percentage looks from farther out (18-for-54, 33.3%).

Even though McCormack played 90 minutes more than backup Tyon Grant-Foster through KU’s first 10 games, the veteran big only had two more makes at the rim than Grant-Foster (12-for-17), a newcomer who plays on the wing.

Redshirt freshman Jalen Wilson, a perimeter player who also serves as KU’s small ball center, is the Jayhawks’ best finisher around the rim (30-for-45, 66.7%) thanks to the smart angles he takes and his willingness to go at defenders in the paint to finish over them.

Individual strengths and weaknesses aside, senior backup big Mitch Lightfoot said of KU’s problems with converting inside, “That’s on all of us.”

But then Lightfoot said both he and McCormack need to be better finishers.

“I think when guards get to the hoop we can use our athletic ability more and get a couple more dunks, which are pretty high percentage plays,” Lightfoot said. “If we can do stuff like that I think we’ll be OK and get back to what we should be doing.”

KU only had 16 dunks in its first 10 games and five of those came against overmatched Omaha. McCormack entered this week with just five successful dunks among his 84 overall field goal attempts.

Asked on Monday if there were ways to get McCormack more attempts at the rim, some immediately came to mind for Lightfoot.

“Yeah, I would say we’ve got to look at him on rolls to the hoop and stuff, and just get him easy lobs,” Lightfoot said. “It’s also on Dave and I — posting up closer to the hoop to get easier layups, where you’re shooting a 3-foot jump-hook instead of a 6-foot jump-hook.”

On a wider scope, KU could boost its rim scoring as a team just by zeroing in on a few areas. Self said Monday these Jayhawks, unlike many of his best KU teams, can’t throw the ball to a big inside and come away with two points. What’s more, Self said these Jayhawks haven’t yet found enough ways to throw lobs for dunks or layups, nor have they ran to score in transition off defensive rebounds.

Then there are extreme instances, such as early in KU’s home loss to Texas on Saturday, when the Jayhawks drove in for a layup and forced help. Any such attempt, Self explained, should be a good shot even if it’s missed, because a big man loses his defender to the help rotation, freeing the big up for an offensive rebound and easy putback. On the example Self referenced, it was McCormack who missed a wide-open dunk on the offensive glass.

“Those are the things that are correctable and aren’t that far off,” Self said.

The Jayhawks have all of January and February, as well as the Big 12 tournament in early March, to keep improving in many areas, including as finishers around the rim. There is time for them to continue to evolve.

If McCormack can alter his offensive approach, so that he’s only taking his shots from the lowest portion of the paint — a what would Dok do mentality — that would help. If he doesn’t have a great look on the catch, he has shown recently he is capable of kicking the ball out for a 3-point shooter or driver.

KU would likely benefit from Wilson taking an even more assertive approach, too, so that he’s getting more opportunities to score inside.

Agbaji and Grant-Foster are the most athletically gifted players on the roster, and KU’s guards need to push the ball whenever possible, so the leapers can inject some life into the offense on the fast break more often.

A lot of little improvements will help KU convert at a higher percentage around the basket. And the Jayhawks need to form those good habits in the weeks ahead, because a team that misses a ton of shots inside isn’t going to advance very far in March.

KU’s shots at the rim, through 10 games

Kansas coach Bill Self speaks to media ahead of road matchup against TCU by KUsports.com

Mitch Lightfoot on how KU's post play can improve against Horned Frogs by KUsports.com

That's a challenge for HCBS. He's got to forget about having David & Mitch posting up, unless those two know how to move with the ball instead of just "posting" down low and throwing a hook shot.

Mitch, learn to move closer to the basket, by "QUICK SPIN" immediately once you receive the ball. Not to just stand with the ball, and end up kicking the ball out again. That's a waste. Spread your damn legs wide. Down low. That's why it's called low post. Learn how to bang with your body/shoulders. Learn how to do drop step, power dribble. Do you know why you lost the ball when Harris throw a nice pass after you curled? Your dribble is too damn soft. ONE POWERFUL DRIBBLE - two hands dribble, that's all it takes for you to destroy the rim. Combine that with UP & UNDER moves. Learn how to fake the ball. Your offense needs lots of training.

I'll keep saying this: coaching staff sucks at developing players. Our players don't seem to have these common offense moves: step backs, floaters, all those nifty big moves around the basket. Seriously, we need to hire the right people, if we can't recruit players - you all need to develop players. Xs and Os aren't enough to win NC.

Oh, I don't even think we should be ranked top-10. With 3pt lucks, sure. Even a team with great defense, alone, doesn't win NC. I keep saying this, until our team know how to share the ball and help each other (screen for each other), might as well forget the rest of the season.

How did Doke get so dominant? Same question for Mason, Graham, Svi, Agbaji, Wilson, etc? Was that just them shooting hoops on their own over the summer or did the coaching staff have something to do with that?

BTW, I enjoy reading this great article, Mr. Smith. It's about time.

Note to Coach Self: It may be time to install the offense.