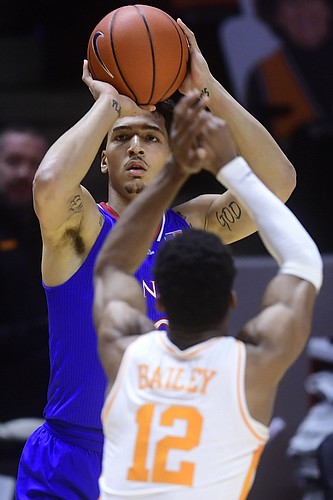 Kansas forward Jalen Wilson (10) is defended against by Tennessee guard Victor Bailey Jr (12) while taking a shot during a basketball game between the Tennessee Volunteers and the Kansas Jayhawks at Thompson-Boling Arena in Knoxville, Tennessee on Saturday, January 30, 2021. by Tennessee Athletics

Earlier in the season, Kansas redshirt freshman Jalen Wilson emerged as a welcome surprise for the Jayhawks. The type of player who produced so much more than was expected out of him that it looked like KU just might spend the whole year ranked in or just outside of the top five.

Now coming off their fourth loss in five games, the Jayhawks need that Jalen Wilson back.

Saturday at Tennessee, Wilson went from starter to reserve as head coach Bill Self continued looking for a refinement that could get his team trending upward again.

Turning Wilson into the sixth man didn’t do the trick, even though the long, 6-foot-8 guard’s recent struggles were at the heart of the move.

“I don’t think Jalen has been very good of late,” Self shared after KU’s 80-61 loss in Knoxville, Tenn. “That’s not a knock to him, but he needed to be put in a situation probably to reevaluate some things and play to his strengths.”

Coming off a scoreless outing in KU’s home win over TCU earlier in the week, Wilson finished with 10 points on 2-for-7 shooting, with nine rebounds (three offensive) and six assists at Tennessee.

But one of KU’s many issues in defeat was that most of Wilson’s production came too late. The Vols already led 56-35 in the second half before Wilson gave the Jayhawks eight points, six rebounds and five assists in his final 13 minutes on the floor during the blowout.

When he first subbed in for KU in the first half, the Vols only led 9-8. While there were others to blame, too, in the stretch that followed, by the time Wilson checked out roughly six minutes later, Tennessee’s lead had grown to 11.

The hope was that Wilson, who was all energy and bounce back in December when he was routinely catching KU opponents off guard, could rekindle that as an active attacker off the bench. The Jayhawks needed a burst from him from the moment he checked in. But they got in the first half more of the lukewarm Wilson that went through a bit of an up and down funk in January — not coincidentally, so did the Jayhawks, finishing the month 3-5.

There’s no doubt the vibrant, confident Wilson who keyed KU’s strong response to a season-opening loss to Gonzaga is still in there. And an injection of bravado from this team’s unexpected December star would uplift these Jayhawks.

It will be up to him to find that best version of himself if Wilson wants to help the Jayhawks (11-6) turn this season around in February.

Self laid out during his postgame video press conference exactly what they need from Wilson.

“Rebounding. Energy. Playing downhill. Being a good passer,” Self began.

They also need their biggest guard stretching the floor, which he did late against Tennessee, going 2-for-3 from long range in the second half.

“I thought he did some things tonight that were pretty positive offensively,” Self said. “Now defensively, not very good — nobody was.”

Wilson is athletic enough and smart enough to meet Self’s defensive standards, as well. And making strides on that end of the court, too, would do wonders for this KU team that can really labor offensively when 3-pointers aren’t falling (see: Saturday’s 6-for-24 woes).

Like many of KU’s guards, Self pointed out, Wilson has to play better defense before the ball reaches his man’s hands, so that shooters are catching it farther out and Wilson — or any other defender — can force a would-be shooter to drive.

As Wilson, the Jayhawks hope, works his way back to being an impact player on both ends of the floor, junior David McCormack downplayed Wilson’s recent trials.

“I don’t think anything’s going on with Jalen,” McCormack said. “I think everybody gets into their ruts — I know I’ve had mine. So he needs people in the program, coaches, teammates to help him out.”

The Jayhawks are smart to want to assist Wilson and lead him toward rediscovering his strut. When he was hitting the glass and scoring over anybody and everybody inside and out in December, KU was playing its best basketball of the season.

That now feels even longer ago after a January filled with potholes and unpredictability.

Self knows all of his players need to be better as KU returns to Big 12 play with just nine games left in the regular season, and March and the postseason just beyond the horizon.

“But with him,” Self added of Wilson, “obviously playing with the swagger that he played with early would be very beneficial.”

As much as I would LOVE for Jalen Wilson to break out and be a consistent and steady 20pt per game guy, he's still learning, and NOBODY on this team is a "star-caliber" player. He is, however, one of the few guys who consistently contributes in OTHER ways. This squad will compete if and only if they accept the fact that none of them are that damn good and work AS A UNIT. All of these guys would be great role players or sixth men on a really good roster, a team with multiple lotto picks, but none of them are carrying us on their own.

Fair points, but Wilson is afraid of contacts. A guy his size should always look to STUFF the F rim each time. What a p*^# $. Everytime he goes to the basket, I know he's going to avoid contact and going away from the basket. He won't be able to rack up more than 10 if his 3s don't fall. He's got no offense weapons against more athletic teams. I really hope we've got a system that can develop these kids to better their skills. I've been watching these kids, they look really lost on offense. I don't believe coaching staff has done enough. Seriously, 3-4 practices won't make them better, but if you spend one-on-one with them, correcting their bad habits, like you said, they'll learn faster. They'll get better. It's a win-win. Been saying this for so long. I coach younger kids, and self-taught, I've seen results from what I'm preaching (and complaining). I love my Jayhawk team, but sadly, this year has been a disappointment. Good coaching can turn not-so athletic team look better on the court. It's not coach BS, sadly.

We dare coaching staff to grow some balls too, yeah, make them more responsible as they get paid millions.

Forget about Wilson getting rebounds, if he doesn't box out his man, it's useless. If he doesn't move to the basket after setting a screen, it's useless. Look at other teams, they screen each other EFFECTIVELY, but our guys setting screen (moving screen is still a regular call, even after playing for years) just to be able to step out of the perimeter to go weaving. Pathetic. No one dares to take a fake left and go right, or cross-over to the basket, there are PLENTY OF MOVES when you have a ball in your hand, even moving without the ball, there are so many options to cut, give and go. But I bet, coach never encourage these kids to do what he's considered as RISKY moves, which obviously other teams have done and adapted these days. Our kids just stay around the perimeter, watching the big do the WORK. If we're lucky, McCormack fadeaway makes a basket - but that' s NOT EVEN REAL BIG/LOW-POST MOVES.

I dare our players to grow even bigger balls, work on your one-on-one move, work on different ways to score while driving, head-fakes, pass-fakes, shoot-fakes, bounce pass, work on using the screen and JUST SHOOT THE F@*% jumper. It's BASKETBALL, EVERY PLAYER MUST PUT THE BALL IN THE BASKET - NOT ONLY THE BIGS....and that's HOW TO WIN GAMES!!!! Playing better defense will not win us games. Playing awfully ugly offense will cost us many games. Bring it up to your "meeting", demand better offense plays, or..... transfer to better teams!

I agree with a lot of what you said...and so did Tennessee. Coach Self said it right...they had our weave scouted and suffocated us. He better come up with some new wrinkles or we're captive to the 3-ball...make'em and we win...miss'em and we lose.

Without a new scheme on offense we're faced with more losses in the regular season and real danger of a one-and-out come tourney time.

Can you imagine Wilson playing defense? Me neither...

It’s good to see Jalen contributing in a variety of ways, but his and the team’s travails are less about offense and more about D. There aren’t many Ws with opponents shooting 50%+ which is a team stat. It’s surprising that we have fallen so far from a top 5 D team.