With No. 15 KU looking for a spark, PG Dajuan Harris is an obvious answer 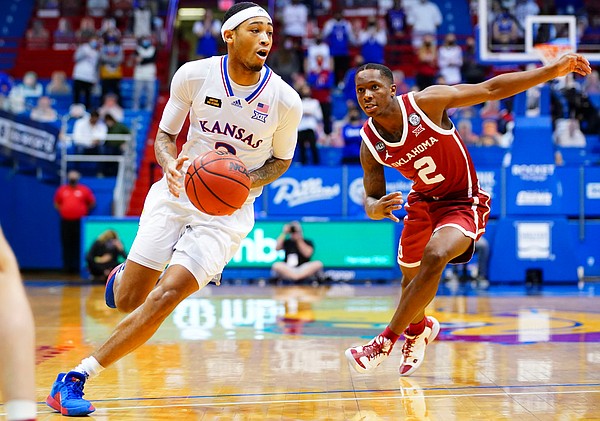 Kansas guard Dajuan Harris (3) drives to the bucket past Oklahoma guard Umoja Gibson (2) during the second half, Saturday, Jan. 9, 2021 at Allen Fieldhouse. by Nick Krug

With his Kansas basketball team coming off an unusual stretch of three losses in a row, head coach Bill Self openly suggested it might be time to “stir it up and try something different.”

The Jayhawks’ starting five is so solidified 15 games into the season that Self isn’t going to blow it up. But a more subtle change wouldn’t be crazy. And if anyone is getting promoted to a starting role at this stage of the schedule, the obvious choice is Dajuan Harris.

Self mentioned on “Hawk Talk” Monday night that in KU’s first practice since the loss at Oklahoma he mixed the teams up and one group “was actually fun” to watch. Who knows for sure what the coach saw that piqued his interest. However, the Jayhawks’ offense definitely becomes more aesthetically pleasing when Harris, the redshirt freshman point guard from Columbia, Mo., is on the court.

For the season, Harris is only averaging 15.3 minutes a game, contributing 1.9 points and 2.3 assists. But his role already has expanded significantly in the past week, following Bryce Thompson getting sidelined due to a broken finger. Harris played 20 minutes at Baylor and 21 at Oklahoma.

The 6-foot-1, 170-pound Harris isn’t someone you turn to for his scoring, but when he’s on the floor the Jayhawks have an old school, pass-first point guard who goes out of his way to keep the ball moving and is at his best creating shots for everyone around him.

His instincts as a passer will only help KU find more opportunities to get out and score in transition, too, because Harris doesn’t overthink anything with the ball in his hands. Reading the court and reacting come simultaneously and naturally for him, whether that’s off a KU defensive rebound and outlet or in a half court set.

Even better for Harris’ case, adding him to any KU lineup isn’t disruptive. He blends in perfectly. KenPom.com breaks down every roster in college basketball by looking at each player’s percentage of possessions used (%Poss). The measure gives credit or blame to a player when he ends a possession by making a shot, missing a shot that doesn’t turn into an offensive rebound or commits a turnover. With a %Poss of 10.1%, Harris falls into the KenPom category of “nearly invisible.”

Self’s hope to “stir it up and try something different” may or may not mean a change to the Jayhawks’ starting lineup. Regardless of the specifics of the tinkering going on behind the scenes, Harris has shown in recent spurts he can make an impact for KU even as a non-shooting threat (11-for-25 from the floor, 3-for-5 on 3-pointers during his first college season).

KU actually outscored No. 2 Baylor, 37-36, when Harris played in that Jan. 18 matchup in Waco, Texas. Even his dunk attempt on a fast break that went down in the final stats as a block for Mark Vital was an instance of Harris showing his moxie. That was a young player trying to inject his squad with some life. Here’s betting next time he won’t waste any milliseconds glancing back to see who’s coming behind him; Harris will just go in for the jam. 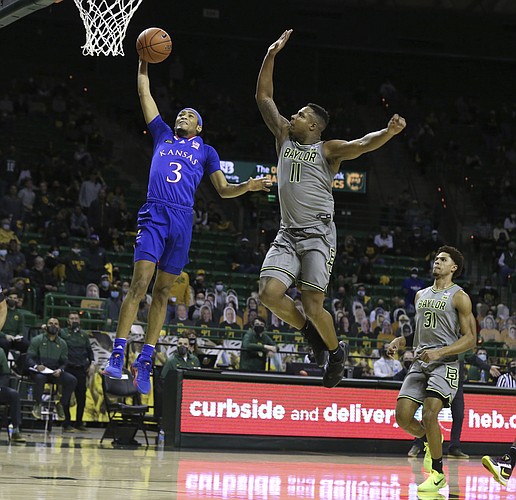 In the loss at OU, two of the Jayhawks’ best lineups featured Harris, too. When he was in with Marcus Garrett, Christian Braun, Ochai Agbaji and Jalen Wilson in a five guard-lineup (7:40 in total), KU outscored the Sooners, 11-7. And during the 3:15 Harris played with Garrett, Agabji, Wilson and Mitch Lightfoot, KU had an 11-6 advantage.

Who would Harris hypothetically replace in the starting lineup? It wouldn't be Garrett or Agbaji. But you could make a case for any of the other three starters — Braun, Wilson or David McCormack — turning into a sub and still playing close to his normal minutes.

Even if Self ultimately keeps Harris as a reserve, it wouldn’t be surprising to see the team’s true point guard seeing an increase in minutes with Self and his staff also pinpointing the lineups where the young and at times — depending on the opponent’s lineup — undersized Harris fits in best.

And with No. 15 KU’s next game coming Thursday versus TCU, a team KU dismantled on Jan. 5 with Harris filling in for the injured Garrett, this is the perfect time to introduce Harris to a more extensive role.

Dajuan Harris in KU’s past 5 games

(Lineup combination played at least 1:30 together in listed game)

We, fans, have realized this 3-4 games back, coach. It's good to see you finally wake up.

"The object is to make your teammates better. To make sacrifices. To make the extra pass. Think about defending. Maybe sacrifice yourself a little bit for somebody else." -- LB

Harris, Lightfoot, Braun are among those players.

"The Most Obvious is the Hardest to See"!

Harris and Marcus rarely drive the ball. They dribble the air out of it. Bill needs to make them watch video of Frank and Dotson. Drive the ball!

Nice observation Edward! Coaches like to play the most athletic players as well as their favorite players. Coaches don't necessarily like to play players with the most heart or that get the job done everytime even though when they do it, they look ugly. So yeh, to me it's obvious to play the players that get the job done the most often, and for most coaches, that is a hard thing to see.

....it is more than about time to play other players to see who plays best. We should have been doing this a month ago. I hate hearing about a blue team and a red team and that apparently each team is the same from practice to practice. We should be mixing it from time to time from the get go.