Jayhawks have a 'nice,' 'pretty good' basketball team — just not an elite one 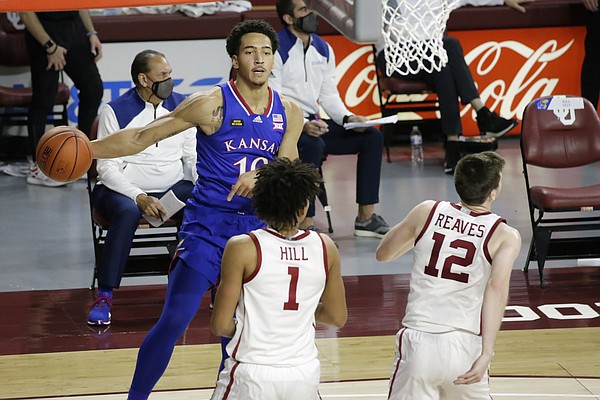 If for some reason you needed any more proof that this year’s Kansas basketball team isn’t going to win the Big 12 or roll into the NCAA Tournament as one of the favorites to cut down the nets in Indianapolis, you found it Saturday in the Jayhawks’ 75-68 loss at Oklahoma.

If you’ve watched enough KU basketball through the years, you didn’t need a reminder that the current roster can’t dominate like so many of its elite predecessors.

Either way, we should all be on the same page now. This Kansas basketball team looks like a fairly ordinary No. 5 seed.

It’s because the Jayhawks have been so consistently ridiculously good in the Big 12 for so long, that it may be challenging for some to accept that. Even one of the least imposing teams Bill Self has coached in his 18 years with KU, the 2018-19 roster that finished 26-10 in the wake of Udoka Azubuike’s season-ending injury, was a No. 4 seed. That’s the lowest seed line KU has fallen to on Self’s watch.

March Madness brackets are still seven weeks away from being finalized. But right now the Jayhawks are 10-5 overall, 4-4 in the Big 12 and not living up to their current No. 9 ranking, which will obviously take a significant hit when the new AP top 25 comes out on Monday.

As they failed to get the defensive stops they needed to win at OU on Saturday, something Self said after KU’s loss at Baylor earlier in the week came to mind.

Self’s no fool. He knows this is a flawed team — at least by KU’s standards. But the reality of the situation is there’s actually nothing wrong with having a “nice” or “pretty good” basketball team. Most programs around the country would love to be a No. 5 seed on Selection Sunday.

Does that mean complacency is about to set in for the Jayhawks? Of course not.

The goal will remain to change the narrative between now and when the games and outcomes matter even more in March.

KU senior Marcus Garrett, who played on a Final Four team in 2018 and arguably the best team in the country in 2020, no doubt understands how far away this team is from those heights. But he also has an idea of where KU better adapt if the Jayhawks want to alter their trajectory.

“I feel like we just have to lock in defensively,” Garrett said after the Sooners shot 45%, marking the third game in a row — all three KU losses — that the opponent shot at least that well.

Last year, the Jayhawks’ benefited from the smothering defense they could play with Azubuike, Garrett and Devon Dotson. Other years, they just out-talented most of the Big 12 pretty easily.

Having a “nice,” “pretty good” basketball team isn’t something KU fans are used to seeing, nor the type Self is used to coaching. And while Self has openly demonstrated he knows where KU’s at right now — “We’re just like 97% of the teams in America,” he said at one point after the OU loss — he remains optimistic about the Jayhawks’ chances to evolve into something greater.

KU isn’t anywhere near playing to its ceiling currently. But Self said his team got closer to its optimum level in December, following the season-opening loss to No. 1 Gonzaga, when he thought the Jayhawks “were pretty damn good” while winning eight in a row.

“Usually our teams get better after Christmas. Post-Christmas we haven’t been nearly as good,” Self said after his team fell to 2-4 in January. “And I think a lot of it is the competition, I think it’s where we’re playing, but also I think we don’t have the same oomph as what we had prior.”

The search for ways to change course midseason is officially on. Self openly shared after the OU loss he may need to shake up KU’s lineup. As he tinkers in the days ahead, he hopes to find some combinations that do the trick.

“I am very optimistic that this team could still have a very, very, very successful and potentially storybook ending,” Self said. “I still believe that. I think we’ve got to do some soul-searching and look in the mirror — and I’m talking about coaches everybody — and find out, ‘Hey, just what do we really need to do and commit to for us to be the best we can be.’ Because I think we say we want to commit to it, but I don’t think we’re all totally bought in to that. So I think there’s some things we can do to improve in that area.”

This season’s story is different than the ones KU fans are used to reading. But didn’t a lot of those old page-turners end in despair anyway? Maybe the hopelessness of a — gasp — three-game losing streak will dissipate by March.

Regardless of the wins and losses that come in November, December, January and February, the goal is always to be peaking when March Madness rolls around.

Saturday’s loss at OU could be the wakeup the Jayhawks needed. Self doesn’t seem interested in stubbornly plodding ahead with something that isn’t working.

Will whatever comes next magically turn KU back into a No. 1 seed? No. But it’s time to embrace the fact that these Jayhawks are not going to reach the level of Gonzaga or Baylor this season. KU could theoretically even beat one of those elite teams on a given day or night, but it's consistency that separates the Zags and Bears from every other team — especially KU.

There might be some real entertainment value in the Jayhawks as a No. 5 seed, too. KU as the hunter instead of the hunted during the NCAA Tournament sounds intriguing.

Benton, I totally agree with your article. I see team's potential, and as coach BS put it: “I am very optimistic that this team could still have a very, very, very successful and potentially storybook ending,”... Say, can you please relay this to the coaching staff?

We've got pieces of the puzzle, but it's up to coaching staff to guide players to complete the puzzle. I see what's missing is FINISHING STRONG TO THE RIM, that's one of them. I can't say much if coach BS keeps emphasizing weaving plays - we saw 3-4 TOs each game just because of the ball got stolen or we were charged with moving picks - which hurt us a lot. We can't win by emphasizing too much on defense, our offense NEEDS IMPROVEMENT more than ever. How many missed layups, missed chances getting foul calls when players go up to the rim?

These kids need to be taught variety moves to go up to the basket. Most of our players don't know the art of scoring sadly. We've got good guys who can dunk, who can leap with their long legs, but they approach is always try to beat their defenders to the rim. That will not work most of the time.

Here are some good moves to the basket that will work more effectively than just layups in a hurry:

The important thing to remind our players is: ALWAYS IN CONTROL, DO NOT RUSH. Go Jayhawk!

KU’s problem is defense - usually a Bill Self strength.

Commit to starting Harris as PG. He's our only true PG & we play so much better with him running the show. Move Garrett back to SG & free him up to score & play defense.

Play faster, run more, get in our offense quicker. Won't make us an elite team, but gives us a much better chance to win & play more to our current roster's abilities.

This team is just not tough enough.