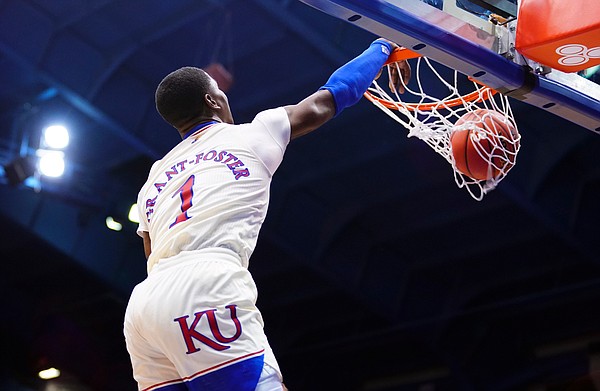 Kansas guard Tyon Grant-Foster (1) throws down a dunk during the second half on Friday, Dec. 11, 2020 at Allen Fieldhouse. by Nick Krug

It doesn’t feel like all that long ago that Tyon Grant-Foster was finding ways to soar and shine off the bench for Kansas during the nonconference schedule. But as the stakes have risen and the opponents have become more daunting in Big 12 play, Grant-Foster’s minutes have dwindled.

Earlier this week the 6-foot-7 junior college transfer didn’t play a second during the Jayhawks’ Big Monday game at No. 2 Baylor. That prompted a postgame question for head coach Bill Self regarding whether Grant-Foster was even available.

Self said he was, and it wasn’t an injury for Grant-Foster that limited KU’s rotation to eight players in the 77-69 road loss. It would seem Self didn’t regret the decision.

“I hate that he didn’t play and that he’s not playing much,” Self said, obviously referencing how the backup’s minutes have plunged during Big 12 play. “I would certainly like to see more in practice that would probably give us confidence to play him in a situation like that.”

Grant-Foster didn’t have any issues finding playing time when KU last took on a non-Big 12 opponent. He scored a personal season-best 13 points on 5-for-10 shooting in 20 minutes during a rout of Omaha on Dec. 11. But since then, here’s how much he’s played during KU’s 4-3 start to conference play:

His most time off the bench in league play has come in a blowout loss and a blowout win. When games are in the balance, Self turns to the players he trusts most.

“He’s not playing,” Self bluntly replied on Thursday, when asked during a video press conference about where Grant-Foster is in his development this season. “That kind of says it right there.”

KU’s coach made it clear Grant-Foster — currently averaging 3.7 points on 40% shooting (1-for-15 on 3-pointers), as well as 2.6 rebounds a game in just 9.4 minutes — hasn’t been held back for any disciplinary measure or anything of that nature. Basically, what Self sees in practice hasn’t convinced him to play Grant-Foster more in games.

“I love the kid. He’s a great human being. A sweet spirit,” Self said, before admitting he thought Grant-Foster would be contributing more at this stage of the season.

“He’s terrific. He just hasn’t had the opportunities,” Self said. “It’s hard to give guys opportunities when you haven’t seen some consistency.”

KU’s coach seemed genuine in his fondness for the athletic junior guard, who transferred in during the past offseason from Indian Hills Community College. So much so that Self actually appears authentically conflicted about not playing Grant-Foster.

It was those words out of the coach’s mouth on Thursday that leads one to believe we’re about to see more of Grant-Foster in the next couple of weeks, beginning Saturday at Oklahoma. It’s difficult for a young player to grow and gain confidence without playing during actual games. And it appears Self is trying to find the balance between teaching Grant-Foster about the effort it takes to earn minutes and giving the first-year KU player some opportunities to prove himself.

Assuming no more postponements pop up due to the pandemic, the Jayhawks (10-4) have upcoming Big 12 games against OU, TCU and Kansas State in which Grant-Foster could be integrated into the rotation. (A Jan. 30 nonconference road trip to face a 10-2 Tennessee team might be more of a challenge for the developing reserve.) But the time to see if Grant-Foster can indeed live up to Self’s standards is now, given that freshman guard Bryce Thompson’s broken finger has hurt KU’s depth.

Grant-Foster is the type of offensive player who has never encountered a shot attempt he isn’t convinced he will make (see: his 25.1% usage and 3.4% assist percentages). But that could potentially be a good thing for KU if the Jayhawks can turn Grant-Foster into a specific type of role player who comes in for an offensive spark. If he can make that happen, he’ll also have to avoid becoming a defensive liability if he wants to stay on the floor.

We should know by Feb. 6, when KU plays at WVU, whether Grant-Foster has become a key member of the rotation, or if that will have to wait until next season. If Self trusts him to play against a Bob Huggins team in Morgantown in February, that’s a true sign of progress.

Self isn’t giving up on Grant-Foster, even though he said Thursday the Jayhawks have been playing “the guys that give us the best chance” of late.

“But we hope that changes,” Self said, “because he would enhance our chances if we all felt like we were in tune with what we needed to do.”

IMO anything above 7 minutes is doubtful, barring injury to someone else. Maybe that's what is meant by a 'spot'. Hopefully he can demonstrate better defense, fewer forced shots, better ball movement and rebounding. Then he can earn meaningful minutes. I'd be ecstatic to be wrong on this and watch him step up. He's clearly a good athlete.

He doesn’t understand the offense or the defense. He gets out of position and makes absurd decisions. Wait’l next season.

I had to put on my Foster Grants to read this article!

As stated in some previous columns, Tyon has great potential.

However, you practice to play and then later play to practice.

Tyon has yet to sufficiently impress Bill Self in Practice.

He'll get there. Just needs to keep studying the schemes.