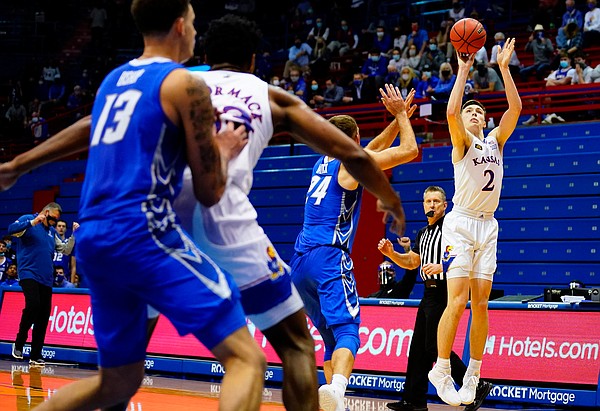 Kansas guard Christian Braun (2) hits a three from the corner over Creighton guard Mitch Ballock (24) during the second half on Tuesday, Dec. 8, 2020 at Allen Fieldhouse. by Nick Krug

For shooters on Bill Self’s teams, there’s a five-letter word that’s just as bad as any four-letter swear word: “slump.”

“I don’t like it if a guy were ever — a shooter — to ever admit that he’s in a slump,” Self said Friday.

And to his credit, sophomore guard Christian Braun didn’t spew such coarse language as “slump” while speaking with reporters on a video call earlier in the day. Rather, he said he was “just missing shots right now.”

The topic of Braun’s 3-point shooting came up ahead of Saturday’s home matchup with Iowa State, because, well, Braun hasn’t connected on many of his looks from beyond the arc recently.

After Braun, a 6-foot-6 guard who graduated from nearby Blue Valley Northwest High, went 16 for 36 (44.4%) in seven nonconference games to open the year, many expected him to continue burning KU opponents from downtown in conference play.

Braun said he hadn’t noticed anything that was consistently affecting his shooting during KU’s 10-3 start.

“I just think I need to hit shots, shoot the ball better,” Braun said. “All that takes is just to keep shooting. I can’t go away from that. I know I’m a good shooter, and they’re going to fall eventually. I’ve just got to keep putting them up.”

That’s the perfect approach for a reliable shooter like Braun to take. It’s also part of the mindset his coach wants to see from him.

There are plenty of other ways to impact the outcome of a basketball game, of course. Self said that’s one of the first lessons he ever learned from his father, Bill Self Sr.

If Braun were just a 3-point specialist and nothing else, he wouldn’t be a starter at KU averaging 30.2 minutes per game. Braun is averaging 8.3 points while shots aren’t dropping for him in Big 12 play, but he also contributes 5.7 rebounds, 2.3 assists and 1.0 steals. On the season, he has led or tied for the team lead twice in rebounds and three times each in assists and steals. He even led KU in blocks versus Kentucky with two.

Braun stands out by making hustle plays and winning plays. According to the numbers KU keeps, he has a team-high 17 floor burns this season.

Though Self always wants his players doing more on those fronts, the coach is not worried about Braun’s 3-point shooting.

“A guy that has a reputation of being a shooter, you should not base his good or poor play based on if the ball goes in the hole or not,” Self said. “There’s plenty of other things guys can do to bring value, to help a team win. And Christian’s certainly capable of doing that. And he knows that.”

Braun’s effort and execution in other aspects of the game, no doubt, have helped him remain composed about his 3-pointers.

“You know, a lot of them are going in and out,” Braun said. “I think I have (continued to be assertive). There’s been a couple of games where I went 1 for 5 or I’ve gotten enough up. I just need to hit the shots. And that’s on me.”

Even on days when those quality looks rim out, Braun is a valuable player for the Jayhawks. And when he is knocking down 3-pointers on top of everything else he does, it’s KU’s opponents who are doing the cursing.

Kansas coach Bill Self speaks to reporters ahead of matchup with Iowa State by KUsports.com

Mitch Lightfoot on why Jayhawks need to improve their transition defense by KUsports.com

Does Prison Mitch have a scar or just a tattoo?

I think it was Travis Relefords Sr year that he made something like 60% from 3. A lack of attempts meant it didn’t get recognized much, because he never took a contested shot. There’s something to be said for an extra pass to get a better shot, though any shot is always better than none at all.

IIRC, WVU purposefully played off of the perimeter shooters for some reason even though we had been one of the best in the conference from deep up to that point. It might be that the other teams are playing tighter D on the perimeter which also translates to and correlates with more freedom and success inside for for David.

One of the great characteristics of Coach Self’s teams are their growth through the season especially in adapting to the other teams on O&D. My guess is that they will continue to exploit openings inside while also adjusting on the perimeter to get just that little better look. Dropping the last part of in-out.

Braun is in a slump. Remedy: Keep shooting ‘till you get hot, of course.

I'd like to read the post. But print too small and paragraph too long. Maybe I'm blind and lazy.

Fixed now. Not sure what the glitch was. Give it another try!

Love the guy. He works so hard, smart. Shots will fall. Thanks for fixing.

I have faith in Braun. Love his guts, floor burner, like you said.. He's one of our rare dunkers, great instinct on defense. He just needs to do head fake and cuts more often, get more open for 3pt shots. He'll be alright. If you can shoot 20 points against WV, you can do the same to just about every team in the country!!!

Where is Foster? Have not Seen him in 3 games