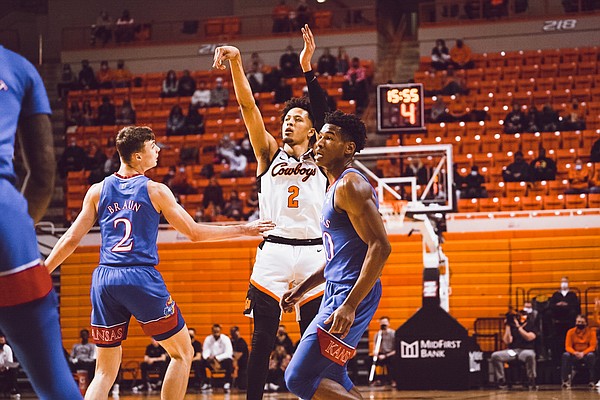 Months away from becoming a millionaire, Cade Cunningham showed Kansas and anyone willing to shell out a few extra bucks for ESPN+ why some lucky NBA team is likely to select him No. 1 overall in the 2021 draft.

It took a lot of zone defense in the second half for the No. 6 Jayhawks to keep Cunningham and his Cowboys from sprinting away to a win, but the damage the conference’s latest one-and-done star did early on set up OSU’s 75-70 upset win at Gallagher-Iba Arena.

Even more spectacular, the young man who put up 18 points, seven rebounds and three assists and set the tone offensively in the first half delivered one of the most important defensive plays of the night. With the game tied at 70 in the final minute, Cunningham blocked Marcus Garrett’s layup and then flew to save the ball out of bounds and sling an outlet pass that led to a Rondel Walker layup and a three-point play with 38 seconds to play.

Cunningham also closed out on Ochai Agbaji well with about nine seconds left to influence a missed 3-pointer that could’ve tied the game. And his long arms were back in the view of Garrett on the baseline out of bounds play that went awry in the final seconds, when Garrett’s pass got picked off by Bryce Williams, sealing the Cowboys’ victory.

Back to when Cunningham paved the way for the win with his offense, though.

When the Jayhawks played man defense in the first half, they had no answers for the versatile 6-foot-8 phenom from Arlington, Texas. Even when KU’s smartest and best defender, senior lockdown guard Garrett, matched up with Cunningham, the Cowboys ran ball screens that either involved big man David McCormack, knowing McCormack wouldn’t switch onto Cunningham, or sought out a screen from another OSU guard, looking for a switch that Cunningham could exploit one-on-one.

KU kept the point guard in an NBA small forward’s body scoreless for a little more than six minutes to open the game, but that wasn’t going to last. Cunningham found a great look at a 3-pointer from the right wing for his first basket, tying the game at 14 early. Before long he was crossing up Tristan Enaruna and burying a long jumper. The next trip down, in transition, Cunningham discovered himself wide open for another 3-pointer, back on the right wing. He cashed it for OSU’s first lead of the game, a basket that ignited everything for OSU’s upset bid.

Soon after he found that favorite spot of his on the right wing again, sized up Christian Braun, rose up and drained a third 3-pointer off a crossover.

Once Cunningham got going, the Cowboys around him believed they could not only play with KU, but beat the Big 12’s powerhouse program.

“He was the best player in the country for the first 10 or 12 minutes of the game, or 14, whatever it was. He scored, he made 3’s,” KU coach Bill Self said afterward.

“Killed us on ball screen defense. I thought he showed everybody why he’s so good, because he did it a plethora of ways. It wasn’t just catching and shooting. He did it by playing,” Self said. “I thought he was very impressive.”

Cunningham took the Cowboys to the locker room at halftime with a 46-35 lead, already boasting 14 points, five rebounds, three assists and a block on his personal stat line.

While he did play through some freshman mistakes at times — stepping on the sideline in the corner, committing an offensive foul out on the perimeter while driving with his head down in the first half and much later traveling in the corner with KU rallying in crunch time — Cunningham mostly played so well that KU spent the second half in a 2-3 zone and a triangle-and-two zone to negate him.

“Just getting the ball out of his hands,” KU junior guard Ochai Agbaji said of the defensive approach for most of the second half, “and getting other guys to make plays.”

It worked for the most part, even though Cunningham hit a jump hook in the paint over Garrett shortly after intermission, and later on connected on another floater over Garrett in transition.

And even when Cunningham actually missed a crafty lefty runner off the bounce near the midway point of the second half, KU’s defenders had zeroed in on him to the point that Isaac Likekele easily swooped in for the offensive rebound and putback. That and-one play created by Cunningham’s offensive gravity with 9:16 left put KU in a 65-49 chasm.

“I thought we did a good job second half of neutralizing him,” Self said, “but a large part of that is because we played zone.”

Now the Jayhawks have seen the Big 12’s most gifted offensive player in person and lost. They’ll have to wait until Feb. 8, when Cunningham plays in Allen Fieldhouse for the only time in his brief college career, to see if they can slow him down for two halves and avoid an OSU sweep in 2021.