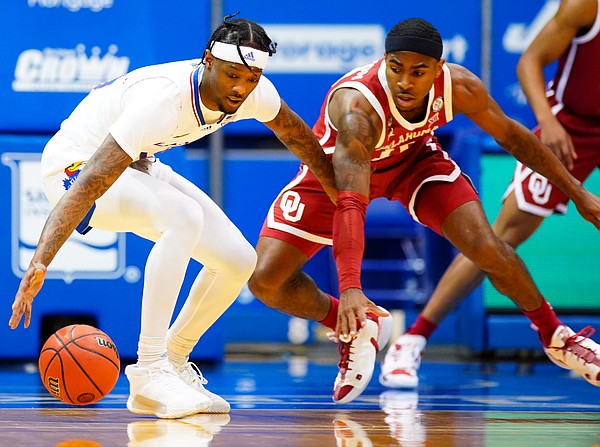 This year’s Kansas basketball team might do something that hasn’t happened since Bill Self took over the program in 2003. Not that it would be advisable.

The Jayhawks certainly aren’t chasing the distinction of becoming the first KU team coached by Self to fail to achieve an NCAA Tournament seed between Nos. 1-4. But it’s very much in play.

In the most recent edition of Bracketology from ESPN’s Joe Lunardi, KU (15-7 overall, 9-5 Big 12) landed as a six seed, on the same line as the likes of Colorado, Virginia Tech and Purdue — a group of meh teams in an underwhelming season for college hoops.

The good news for the Jayhawks is they have one last stretch still in front of them that could make up for all of that blah that got them in this position in the first place.

Up to this point in the season, KU doesn’t deserve to be a top four seed. No one was aghast this past weekend when the NCAA rolled out its bracket sneak peek of the top 16 overall seeds and the Jayhawks were nowhere in sight.

While KU, no doubt, is on an uptick of late, most years people who follow the Jayhawks closely wouldn’t call the past five results — three combined wins over the two worst teams in the Big 12 (Iowa State and Kansas State), a victory against fringe AP top 25 team Oklahoma State and giving up 91 points in a road loss at West Virginia — an uptick. They would call that mostly handling your business in February. Or they would still be fretting about KU’s setback at WVU. This isn’t a one seed or bust kind of year, though. Far from it.

To the Jayhawks’ credit, they have beaten the teams they’re supposed to beat all season long. Per the NCAA’s NET Rankings, KU is 3-0 versus Quadrant 2 opponents, 2-0 against Quad 3 and 5-0 when facing the lowest tier of opposition, in Quad 4. They don’t have any bad losses, as head coach Bill Self repeatedly has made sure to allude to recently when his team’s defeats or struggles come up.

It’s in those pesky Quad 1 games where KU has yet to differentiate itself amid the muck. Behind Gonzaga and Baylor exists an array of generally competitive teams that are nowhere close to touching those two national championship favorites. It wouldn’t take a meteoric rise for KU between now and Selection Sunday for the Jayhawks to cement a spot on a top four seed line.

Of course, those losses (six since Jan. 2) are why KU’s status kept falling in recent weeks. Sure, the Jayhawks were facing some quality teams, but they repeatedly lost those games. KU’s best victory in its past 10 outings came on Feb. 8 against Oklahoma State, a team ranked No. 43 in the NET and No. 44 at KenPom.com.

KU hasn’t defeated a legit top 20 team since Oklahoma (No. 9 AP, No. 17 NET, No. 21 KenPom) visited Allen Fieldhouse on Jan. 9. But the Jayhawks, who actually appear to be settling in defensively and rediscovering some of that mojo that made them a top 10 team back in December, are about to embark on what could turn into a résumé building run.

Kansas has three more Quad 1 games on the horizon, following Wednesday’s game at K-State (No. 226 in the NET and 0-11 in Quad 1). Arguably, just going 2-1 in the final three games of the regular season could catapult the Jayhawks into a top four seed line.

Given the Jayhawks’ erratic season, neither of the first two matchups — Texas Tech in Lawrence on Saturday and at Texas on Feb. 23 — is anywhere close to a foregone conclusion. But with Jalen Wilson’s resurgence and Bryce Thompson back as the sixth man, KU winning both of those games no longer feels farfetched.

Nothing we’ve seen thus far from the fluctuating play of the Jayhawks tells us they should beat Baylor at the fieldhouse on Feb. 27. Even with their improved ball screen and help defense, could they score enough to beat the Bears? It’s not impossible, but it remains unlikely for now.

So cast that mirage aside, and let’s say the Jayhawks find ways to handle business at K-State and grind out wins over Tech and the Longhorns. A loss to Baylor isn’t going to hurt their seeding at that point, and they should still have opportunities to further lay claim to a No. 4 or — let’s get crazy — a No. 3 seed by padding their résumé at the Big 12 tournament.

The Jayhawks could have as many as six more Quad 1 games on their record by Selection Sunday, further beefing up their case. It will take an impressive turnaround to make it happen, but keeping the streak of attaining a top four seed alive remains a realistic and attainable goal.

(KU last fell below that line in 2000, when Roy Williams coached a lineup featuring freshmen Nick Collison, Kirk Hinrich and Drew Gooden to a No. 8 seed and a second-round exit.)

Baylor has shown how to keep momentum and resist dropping down in the seeding: don’t play...especially against tough competition.