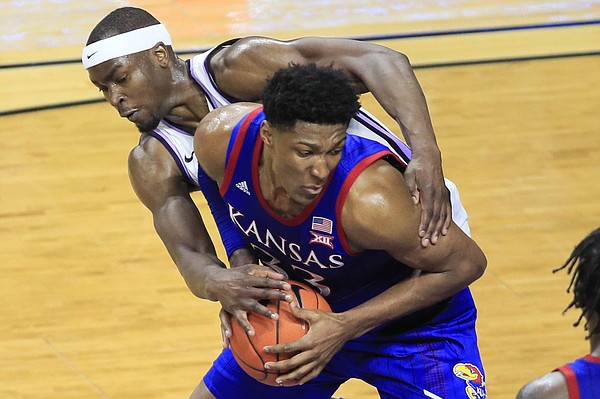 Nothing about 2020 has felt or will ever seem normal for anyone, including Kansas basketball players who saw a pandemic cancel what they counted on being a lengthy March Madness run.

In spite of all the peculiarities that accompanied the pandemic, though, KU big David McCormack discovered some comfort during an isolating offseason.

After Bill Self sent the Jayhawks away from Lawrence in March, it ended up being close to five months before they were cleared to return to campus in early August for limited training and workouts. In any other year, trips home would have been shortlived and players would have spent the summer getting countless opportunities to prepare for the coming season together.

McCormack, ahead of KU’s first preseason practice on Thursday, told reporters during a video press conference the Jayhawks missed such offseason chances to develop most. While he still described this year’s group as close-knit, there’s value in players being around each other almost constantly, especially on the court, where they can learn about their teammates’ tendencies and strengths during pickup games and organized workouts alike.

Yet oddly enough, McCormack, while away from all of his KU teammates and typical offseason basketball activities, found quarantine to be the “perfect time” to work on himself. He went as far as to describe the seclusion as an advantage.

“Anytime I’m isolated, I know I’m very focused and locked in,” McCormack explained. “And I have, kind of like my racehorse blinders on, so in quarantine I know if I can just work out by myself I’ll be fine.”

After averaging 6.9 points and 4.1 rebounds as a sophomore during KU’s shortened 28-3 season, McCormack spent much of his alone time doing what he could to set himself up for a more productive junior campaign.

“If I’m home, there’s no reason to be lazy,” McCormack said of how he approached it. “Just kind of attack, eat right, and that’s just what I’ve been doing as far as changing my body and putting on muscle, leaning out, dropping weight, all those types of things in order to be a better player.”

With Udoka Azubuike’s college career complete, the Jayhawks will no doubt lean on McCormack much more in the months ahead than they did last season, when he averaged only 14.7 minutes an outing.

In fact, McCormack already has impressed head coach Bill Self with his athleticism and tack. Self forecasted the 6-foot-10, 265-pound junior producing an All-Big 12 season, because he’s a “much improved” scorer and a solid shooter.

Self said McCormack, along with guards Marcus Garrett and Ochai Agbaji, have been the team’s most consistent performers up to this point. The coach not only expects McCormack will have opportunities to put up numbers, but Self also thinks KU’s latest go-to big man can deliver, and perhaps challenge for All-American status.

That might come as a surprise to some, who haven’t seen McCormack since he played limited minutes in KU’s last couple of Big 12 games back in early March. But Self raved about McCormack’s current state of mind.

“His want-to is at an all-time high,” Self presented. “His commitment is off the charts.”

Perhaps forced solitude isn’t always all bad. It seems to have benefited McCormack, leading up to a year when the Jayhawks will need him more than ever.

Marcus Garrett: Leading in a strange year challenging but doable by KUsports.com

I see David averaging 12 to 14 points per game.