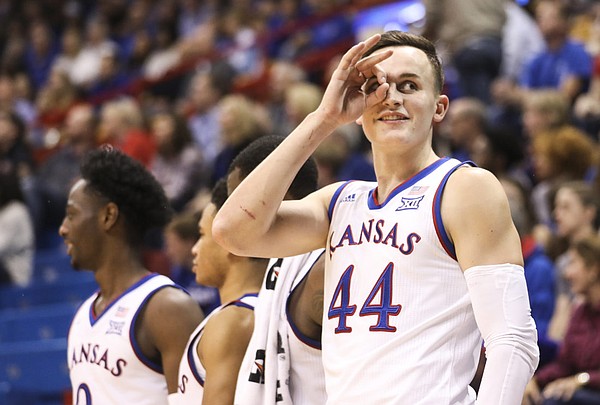 Kansas forward Mitch Lightfoot (44) signals a three by Kansas guard Ochai Agbaji (30) during the second half of an exhibition, Thursday, Oct. 25, 2018 at Allen Fieldhouse. by Nick Krug

Wise beyond his years, Mitch Lightfoot is ready to severely rein in his 3-point firing tendencies.

What’s that? You don’t recall the Kansas forward taking copious amounts of jumpers from beyond the arc?

Well, that’s because Lightfoot’s 3-point binge transpired behind closed doors, during KU practices throughout his redshirt season. Joining forces with walk-ons and end of the bench players on KU’s red team, Lightfoot let it fly from long range. Teammate Chris Teahan estimated the 6-foot-8 veteran big man attempted somewhere between 15 to 20 3-pointers a practice when there were no consequences.

But these days, as the No. 6 Jayhawks prepare for their Thanksgiving season opener versus No. 1 Gonzaga, Lightfoot is a fifth-year senior who, you know, wants to play. So when he subs in for David McCormack on the blue team, Lightfoot is inclined to carry out the type of decisions his head coach Bill Self wants to see.

How often does Lightfoot shoot 3-pointers during practices?

“Coach Self would like me to roll to the basket more,” he said. “I’ve been working on that.”

During his first three seasons with the Jayhawks, Lightfoot scored 101 baskets and only 10 of them were 3-pointers. He’s a career 33.3% shooter from downtown (10-for-30) entering his year-off-delayed senior season.

In 97 career appearances for KU, he’s never attempted more than three 3-pointers in one game, and he only did that once, going 1-for-3 versus Texas Southern in November of 2017, when he was a sophomore. That came 11 days after the only time Lightfoot has made two 3-pointers in a game, when he went 2-for-2 against Tennessee State.

When Self and his staff decided to redshirt Lightfoot for the 2019-20 season, though, he took on a completely different basketball persona, jacking 3-pointers whenever he saw an opportunity.

“I think there’s a big difference from playing on the red team to playing on the blue team,” a chuckling Lightfoot explained. “On the red team you’ve got a little bit more freedom. And last year, yeah, I was definitely — I was giving us a good look, because we were playing against some big guys that could shoot. So I was definitely getting it up.” 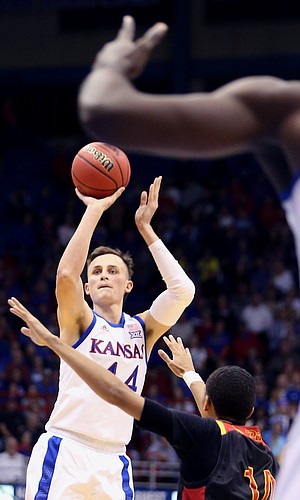 Kansas forward Mitch Lightfoot (44) launches a three-point shot during the second half of KU’s win against Pittsburg State Thursday at Allen Fieldhouse. by Mike Yoder

Unfortunately for fans of small-ball modern basketball, though, it doesn’t sound like Lightfoot will be the stretch-5 off the bench that spaces the floor even more and unlocks some superior version of KU’s offense.

If Self, who saw Lightfoot take all those 3-pointers a year ago, wasn’t impressed enough to want his backup big firing away, it’s not going to happen. That’s not to say Lightfoot will be reduced to playing exclusively in the paint. It just seems all those practice reps from deep didn’t convince the right people that he should incorporate the long shot so much that it becomes a major part of his game.

“He probably put up close to 1,000 to 2,000 3’s last year with us,” Teahan estimated. “And I’m not saying I was any better, and I’m not saying anybody else on the red team was better, but he definitely put up a ton of 3’s. And those numbers have dropped dramatically, that’s for sure.”

Teahan guessed Lightfoot takes “maybe two or three” 3-pointers per practice now that he’s back in the rotation. Taking a stab at how well Lightfoot shot the ball last year, Teahan approximated the big man’s redshirt flirtation with the 3-ball resulted in Lightfoot converting somewhere in the mid- to high-30s, percentage wise, if not 40%.

“He would get hot some days and have some pretty good days,” Teahan shared, adding Lightfoot can shoot the 3 if needed, but the volume will take a hit this year because now he has to play within the flow of an offense.

On occasion, though, Lightfoot should get to relive his glory days as a pseudo 3-point specialist — at least briefly.

“I think me and (McCormack) definitely shoot our 3’s whenever we’re left open,” Lightfoot said. “That’s for sure.”

KU's Mitch Lightfoot on why he was able to take more 3-pointers during redshirt season by KUsports.com

Chris Teahan on how former KU players Devon Dotson and Udoka Azubuike will translate to next level by KUsports.com