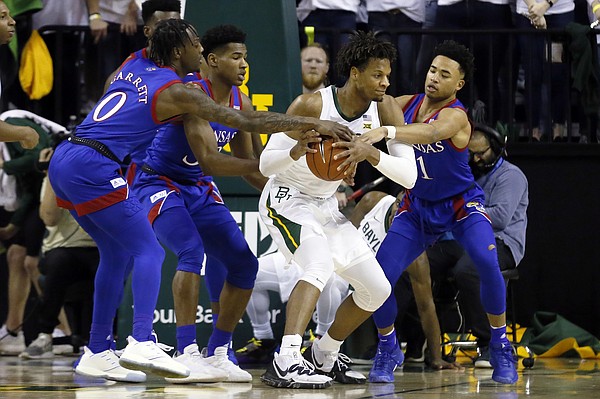 With the regular season officially behind them, the No. 1-ranked Jayhawks should feel right at home when they’re away from Lawrence this postseason, and not just at their mid-March home in Kansas City, Mo., for the Big 12 Tournament.

Kansas fought its way to a 10-1 road record, bolstering its claim to the No. 1 overall seed on this upcoming Selection Sunday.

By definition, the Sprint Center and every NCAA Tournament venue in which KU could play in the weeks ahead, is a neutral site. But that’s open to some interpretation. Kansas fans could gobble up tickets in Kansas City this weekend, turning those contests into pseudo home games, the same way KU’s annual regular-season dates in Sprint Center masquerade as a home game on the schedule.

Once the Jayhawks (28-3) begin their NCAA Tournament run, though, their experience as road warriors this season should come in handy in high-pressure games, in Omaha, Neb., the opening week, and possibly Houston or Indianapolis the following one.

Even though KU is likely to be well represented in the stands at various stops during the 68-team national tournament, any sense of a home-court advantage will be out the window.

“I think when you're rated high,” KU head coach Bill Self said Monday during his press conference, “a lot of times if the game's close in the NCAA Tournament, the majority of the people in the building that aren’t a KU fan would certainly pull for the underdog or the upset, so to speak.”

It’s in those moments that the tension ratchets up in a hurry, potentially infiltrating even a great team’s collective psyche.

That’s when these Jayhawks can lean on their familiarity with winning games outside of Lawrence.

As Big 12 Player of the Year Udoka Azubuike said Monday, the Jayhawks’ confidence entering the postseason is only reinforced by their impressive record on opponents’ home floors.

“Some of the games, we didn’t really play well,” Azubuike said, regarding KU’s 10 road wins. “But we played good defense and we paid attention to details and that kind of helped us. Moving forward, we know we’re not always going to play well offensively, but we’re going to find a way to grind it out defensively.”

That defense, of course (No. 2 in the nation in adjusted efficiency according to KenPom.com), is what makes the Jayhawks a favorite to win it all. And they’ve been so locked in on that end of the floor this season that getting stops and winning has become second nature, and they don’t need the boost of the Allen Fieldhouse crowd to make it happen.

Self’s KU teams often fare well on the road, and that doesn’t necessarily guarantee postseason success — we’re talking about March Madness after all. Still, their 10-1 road record this year gives Self confidence about this team’s potential as the Jayhawks head into postseason play.

“We've had some teams here that you knew that we would get a great effort and you knew that you would probably have a great chance to win, because you knew our crowd would be so good and get guys jacked to play,” Self said. “I don't I think this team needs that as much. At least I hope not. We haven't so far.”

KU road records in Self era, and NCAA Tournament result

Road records of NCAA champions, since 2004

As was said, it's March Madness, anything can happen in a one and done tournament. If you look at KUs records and how they finished and look at the NC records, there isn't much correlation. It's not a very large sample size, the past 16 years, so statistically I think you will find the record insignificant. But the fact they can win without the crowd behind them, certainly doesn't hurt their chances. Let's just hope that those last few weeks of the season we can play offense as well as defense.

It's going to be really unfortunate if they have to play in empty arenas...and I'm not one to overreact on things, but in this case, it just might be prudent...that's billions possibly in lost revenues, but might have to be done. MM won't have the same feel.

OMG, I just posted less than an hour ago...it was just announced. March Madness will be played w/o fans. This is awful.