Marcus Garrett made the All-Big 12 what team? 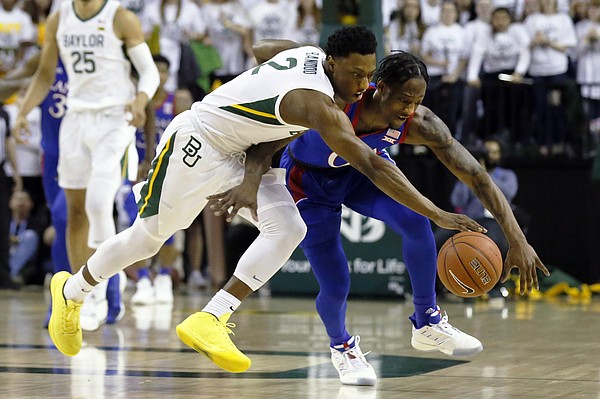 There are plenty of better scorers, shooters and rebounders in the Big 12 than Marcus Garrett. The numbers others have put up, though, don’t equal the impact Garrett makes for the league’s undisputed champ, No. 1-ranked Kansas.

That’s what made it so shocking on Sunday when the coaches’ all-conference selections came out and Garrett’s name didn’t appear until the third team.

The junior guard, who has to lead the Big 12 in intangibles such as court awareness, dedication to defense and scouting report knowledge — and, by the way, led all league players with 5.1 assists per game in conference action — warrants far more credit.

One would have figured the league’s coaches, who had to face KU twice and experienced firsthand the type of effect Garrett has on games with his dogged defense and playmaking on offense, would have viewed him as a first-team performer.

No, Garrett doesn’t blow anyone away with his numbers. Except when considering his 9.4 points, 4.8 rebounds and 1.8 steals in Big 12 games, it’s necessary to also examine the numbers 17-1 (as in KU’s remarkable conference record) and two (the amount of games the Jayhawks finished ahead of Baylor in the standings). Of course, Garrett’s teammates Udoka Azubuike and Devon Dotson — both obvious first-team selections — also played crucial roles in that success. But take away Garrett from the lineup and KU doesn’t win the league so convincingly.

There are no mind-blowingly talented, surefire NBA lottery picks in the Big 12 this year, because a broken wrist robbed Iowa State’s Tyrese Haliburton of the rest of his season in early February. So why not just reward winning with the All-Big 12 team? The league’s coaches will tell you the top-heavy conference has competitive teams throughout. Well, that makes KU’s run through the round robin schedule all the more impressive.

A team that so clearly established itself as the best in the league is worthy of securing three spots on the first team. Garrett is just as important a contributor in what KU already has accomplished this season as Azubuike and Dotson.

Kansas and Baylor had the two best teams in the Big 12 all season and, really, were so much better than the rest of the pack that it would be completely fair to fill the entire first team with Jayhawks and Bears exclusively. This isn’t a deep league this year, and it’s obvious who the most important players are. Azubuike, Dotson, Garrett, Jared Butler and Freddie Gillespie represent best what this league was about in 2020.

Looking at it from another perspective, if the Big 12’s coaches had to put together a five-man lineup in order to battle the five best players from other conferences such as the Big Ten, ACC and SEC, you’d want Garrett on that Big 12 team if you cared at all about beating the best the rest of the country had to offer.

Clearly the coaches respect Garrett’s defense. He was a unanimous choice for the all-defensive team and was voted defensive player of the year. Maybe they thought that was enough of a way to honor his aptitude.

A lot will depend on what’s to come in the postseason for the Jayhawks, but if they play to their potential and make it to the Final Four, people will look back at Garrett’s spot on the third team and laugh. It’s not as egregious as when the Associated Press panel botched its All-Big 12 first team in 2008, failing to get even one Jayhawk on the team. But Garrett as a third-team choice is a misfire.

Garrett makes winning plays and can do so in almost every way imaginable — defensive stops, incredible steals, attacks off the bounce, setting up teammates for high-percentage shots. He’s not a good 3-point shooter (17-for-52, 10-for-32 against the Big 12). Fine. He gives KU everything else his coach, Bill Self, could possibly want out of a player, and when teams leave Garrett wide open behind the arc he’ll take that shot, because that’s the right play.

There aren’t 10 better college basketball players than Garrett in the Big 12, though his spot on the third team suggests otherwise. Nor are there five players better than him in this league. Garrett’s one of the most impactful players around. And he deserved a spot on the first team because he’s a critical component of what has made KU, the likely No. 1 overall seed in the NCAA Tournament, great.

You've said it: the most Impactful player of the year!

He’ll accept the title of “starter on the national champion“ instead.

I was thinking the same thing when I read the list. Shouldn't the big 12's best defender be on first team? Second team at worst.

It's about envy of Self by B12 coaches. No coach will ever admit it, because it sounds and is petty to the extreme. These coaches are highly competitive and hate to lose (big salaries and coaching insecurity abound). So, why place Garrett on 3rd team? Smith gets it! Reminds me a little of the Broadway play of 1955, Damn Yankees. Does anybody really want to see a sports team dominate year after year after year. UCLA and Wooten, anyone?

offensive stats are all they care about.

I promise Garrett will not care one lick about it if KU is hoisting a championship trophy on the evening of April 6th.

The other thing that’s crazy is that all 5 BU starters made 3rd team or better. It’s crazy to think that he’s no better than their worst starter and still we win by 2 games.

Maybe they’ll come around like our fan base. It was just last year that a common comment was that he shouldn’t be playing. someone else should be getting his minutes. He can’t shoot. Coach doesn’t know what he’s doing. Marcus wasn’t as much of a leader then but he was still providing the same non-stat performance.

If a player is the top defender in the league, how do you leave them out of the top 5 players? Hasn't this league proven that defense is what wins? Baylor, KU, WVU are all monster defensive teams. It's a head scratcher.

What this says to me is that the majority of Big 12 coaches do not see defense nearly as important as offense.