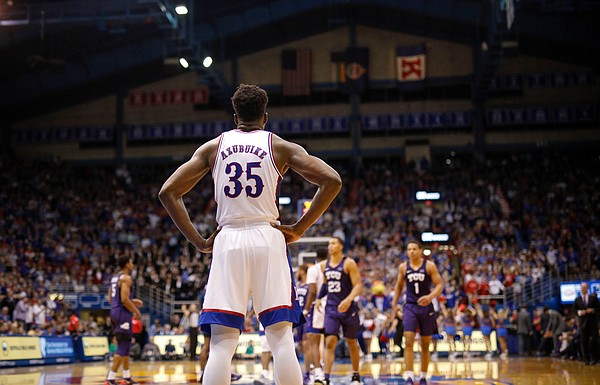 Kansas center Udoka Azubuike (35) waits at the far end of the court during the second half, Wednesday, March 5, 2020 at Allen Fieldhouse. by Nick Krug

Grades for five aspects of the Kansas basketball team’s 75-66 win over TCU on Wednesday at Allen Fieldhouse, where the Jayhawks assured themselves of at least a share of the 2020 Big 12 title.

• The Jayhawks scored their first 12 points in the paint to establish their interior dominance versus the visitors from Fort Worth, Texas. That trend would continue throughout and become a critical component of KU’s early March win.

KU controlled the paint, outscoring TCU, 46-16, inside, and shooting 53.7% overall from the field.

• KU wasn’t as successful from long range, however, going 3-for-12 on 3-pointers.

• The No. 1 team in the nation benefited from 14 offensive rebounds, which led to 19 second-chance points.

• KU’s biggest defensive issue came in the first half, when it could not stop TCU from burying 3-pointer after 3-pointer. The Frogs went 9-for-15 in the first 20 minutes.

The defense tightened up down the stretch, though, as KU held TCU to 4-for-14 shooting from long range in the second half.

• TCU turned the ball over 7 times in each half, and KU racked up 9 steals in all in the home finale.

• The Frogs only connected on 10 of their 28 shots in the second half. They hit 42% overall in the game.

• Udoka Azubuike was unstoppable as ever, sore ankle be damned.

The Jayhawks knew the first time they faced TCU the Frogs struggled to handle the 7-foot senior, so they counted on a repeat performance once they figured out Azubuike’s ankle wasn’t bothering him too much to limit his impact.

Azubuike put up a career-high 31 points in his final home game, and, oh yeah, also secured 14 rebounds and blocked 5 shots.

A spectacular finish to an incredible run for the center from Nigeria.

• Point guard Devon Dotson got rolling later in the first half, and often sped his way to baskets and the foul line. He hurt his lower left leg later in the second half, or he would have been even more productive than he was, with 18 points on 5-for-12 shooting, with 6 boards and 2 assists, plus 4 steals.

• Marcus Garrett again looked to be playing through pain (sore foot), but powered through it at points to make key plays.

His assist to Azubuike inside followed by a steal and layup of his own came at a critical juncture of the second half, as KU took control.

Garrett finished with 9 points, 4 rebounds, 5 assists and 3 steals, even if his defense was a little below his high standards on a couple of occasions.

• Ochai Agbaji threw a couple of bad passes for turnovers but flashed his athleticism and finished with 8 points.

• Isaiah Moss only got 1 of his 7 3-point attempts to drop, but he played 37 minutes, and looked good setting others up a few times (3 assists), while contributing 5 points and 4 rebounds.

• Christian Braun played the majority of the bench minutes, with 20, and scored all of the bench’s points (4).

• When David McCormack and Tristan Enaruna were in the game, KU wasn’t quite as effective.