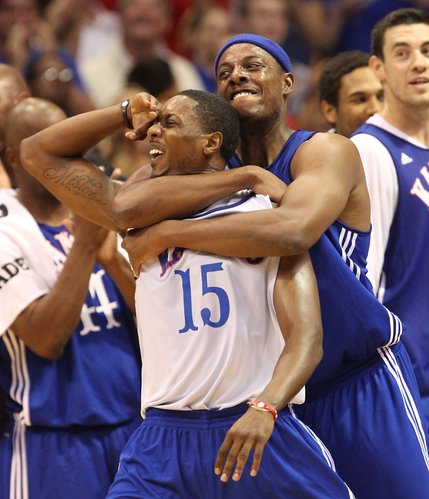 Paul Pierce jokes with Mario Chalmers after Chalmers hit the Legends of the Phog scrimmage's game-tying shot at the buzzer Saturday, Sept. 24, 2011 at Allen Fieldhouse. by Richard Gwin

Without any NBA games or March Madness to discuss, the crew from ESPN’s “NBA Countdown” decided to take a nostalgic approach earlier this week and have former players, including 1997-98 Kansas All-American Paul Pierce, assemble their all-time teams.

The task was an easy one for Pierce and his colleagues, Jalen Rose and Jay Williams: go back through the history of the program for which each played and take any players to build a starting five.

“I’m gonna go big with my squad,” Pierce warned, during the stay-home edition of what’s typically a studio pregame show. “We’re going old school, 6-8 and up pretty much except for the point guard.”

Indeed, Pierce’s all-time KU team turned out imposing, even if nontraditional, with centers Wilt Chamberlain and Joel Embiid down low, Danny Manning at small forward, Pierce on the wing and Mario Chalmers at guard.

“You can’t leave off Mario Chalmers — Super Mario,” Pierce said. “He won the national championship at Kansas with big shots.”

Williams was impressed: “That’s a squad right there,” he replied. “Ain’t nobody outrebounding y’all.”

Williams, a two-time All-American at Duke just after the turn of the century, also put himself on his Blue Devils all-time team, along with Kyrie Irving, J.J. Redick, Grant Hill and Christian Laettner.

Rose, a member of the fabled Michigan Fab Five in the early 1990s, put the three most prolific players from those Wolverines teams — himself, Chris Webber and Juwan Howard — on his squad, along with Glen Rice and Trey Burke.

(KU fans might remember Burke’s 30-footer to force overtime versus Kansas in 2013. Rose definitely did, sharing he recalled watching the game and spilling hot sake on himself while celebrating.)

March moments aside, the consensus between the “NBA Countdown” crew and host Maria Taylor was that Pierce put together the most impressive lineup.

“I think Wilt, once you start there… it’s tough,” Pierce said.

However, both Rose, who played in back-to-back national championship games in 1992 and 1993, and Williams, who won a national title in 2001, were able to beat Pierce when it came time for the former players to discuss their personal best March Madness moments.

During Pierce’s three years at KU, the Jayhawks twice earned a No. 1 seed and were a No. 2 seed when he was a freshman. However …. well, just let “The Truth” explain.

“It’s kind of hard to find something memorable, being that we got upset pretty much every year and never made a Final Four,” Pierce said.

When Pierce was a sophomore, he played on what is still considered one of the best teams in KU history. The Jayhawks finished 34-2 but lost to No. 4 seed Arizona in the Sweet 16.

Pierce’s college career ended in 1998 when No. 1 seed KU got knocked off by No. 8 Rhode Island in the second round.

“There’s not many favorite moments but my favorite game was probably against Arizona,” Pierce said. “We beat Arizona one year to go to the final eight (1996), and then we lost to Arizona the next year (1997) and they ended up being the national champs. But those were two great battles.”

In the 1997 rematch in the same round, this time in Birmingham, Ala., the Wildcats prevailed, 85-82, despite a 27-point outing for Pierce in which he went 9-for-13 from the floor and 3-for-3 from long range and pulled down 11 rebounds.

Paul picked probably the greatest alma mater team of all time. You can't go wrong with Mario but I'll go with JoJo every time. Wilt, Danny, Pierce and JoJo should be unambiguous Kansas all time picks. I probably would go with Joel. Mario would be my 'sixth-man.'

Had the same thought about Jo Jo and maybe pick Raef or Nick over Joel who really wasn't a super, super star until the Pros.

Joel came to KU with virtually no experience, and was supposed to be a multi-year development player. Not sure if anyone ever has developed more during one season than he did, even if it did get cut short.

I like Ron Kellogg or Brandon Rush for a sixth man with John Douglas as a sentimental pick because he played while I was at KU.

Mario Chalmers has unique place in the KU Pantheon that far exceeds his considerable contributions as a player.

Far to hard to call, for me....probably Joel. Kansas has so many great players. We have the ONE (Wilt) and then the Big 3 mega-super stars and a ton of everyday great players.

Hard to compare ability now with those from the mid 60's. Lovelette in 1952 not only helped the Jayhawks win it all but was National player of the year. Manning scored more points than any one else and also won a championship.Jo Jo White had major success. To not have these on your All-Time team would be difficult.

Clyde was above and beyond all who played at that time. I saw him many times and he was unstoppable and way ahead of the time for post men. It could only take Wilt to surpass him for our top all time center.

I really like Paul’s team, and don't argue with his picks. However, I think the all-time team should consist of the top ten all-time players, not just the top five.

So, here are my suggestions for five more to make up the top ten:

Clyde Lovellette – A three-time All-American. In his senior year 1952, KU won the national championship, Clyde led the nation in scoring, and went on to star on the Olympics gold medal team.

Jo Jo White - a two-time All-American. In the ’66 Final Four game against Texas Western, he won the game with a last-second shot from 35 feet out. But, was jobbed by a referee, a Texan in the game played in Lubbock. saying White stepped on the out of bounds line – refuted by reruns who showed he was six inches inside. So, Texas Western won in OT and won the national championship in a historic game against Kentucky. p.s. I was a graduate student at KU and had several business courses with Jo Jo.

Walt Wesley, another two-time All-American - also on the ’66 team.

Nick Collison – An All-American who is KU’s all-time second leading scorer and rebounder. He led KU to the national championship game in 2002, and was named Player of the Year.

1} Wilt, Clyde and Big Joel in the middle!!!! I can't imagine anyone having the guts to drive on that trio!!.

2] If the three point line had been in place, Jo Jo White may have been, not only the greatest KU guard of all time, but maybe the greatest guard, PERIOD!!!

4] Paul would start but Mario would be right there ready to come in.

5] Collison is a great choice...hey, how many guys have gotten a standing O from Dickie V?

6] Endicott, Collins, Wesley, La Frenz, Vaughn, Gooden, Mason, etc......you couldn't go wrong with any three of these Hawks to fill out your squad.

Collins, LaFrenz, Vaughn, Gooden and Mason are sentimental picks. Not that great on a national level, really good just not all-time greats.. Wesley is a great choice. No sure on Endicott since he played before the NBA or NCAA were big deals but it would be hard to argue about back to back National Championships.

Never met Jo Jo, but back in the day you could sneak into Allen Fieldhouse and shoot with these guys before practice would start, before the trainers would run you off (nicely). Good memories.

On talent alone, Joel Embiid should be on the list, but he only played one year. Not quite enough for me to put him on the all-time best list.

Also, I felt bad abut not including Raef LaFrentz. I had the great opportunity to see him play in high school, and then for four years at KU, and beyond in the pros. It was great to have an Iowan on the Jayhawks. Gave me local bragging rights. And,I believe he had a hand in recruiting fellow Iowans Collison and Hinrich. He has returned to Iowa and lives in Decorah.

You can go a few ways with this. Using the selection criterion of best KU players while at KU and relative to the players of their era, my team would be Wilt, Clyde, Jo Jo, and Danny for the first four (all "slam dunks"), plus maybe Paul Pierce, but #5 isn't so clear cut.

Another way to do it, besides going with the players who later became great pros, is to pick the team of KU players who ended up making the greatest contributions to basketball. Phog Allen, Ralph Miller, Dean Smith and Adolph Rupp are my first four picks, and for #5, again I don't know: Jacque Vaughn, Kevin Pritchard, Milt Newton, Mark Turgeon??? There are probably better choices I'm forgetting.

Even Self might have problems getting Paul's team to play defense. Bud Stallworth played on some bad teams, but he was probably the best pure shooter the Jayhawks have had. Was in AFH when he scored 50 against Norm Stewart's Missouri team before there was a three point line,

It's an All-Star team. They never play defense.

What's with the mass exodus out of Wichita?

You mean Wichita State? Have you ever seen how Coach Marshall treats his players? I can take a lot but if he tore into me like he does his players over the smallest mistake, I probably would have walked mid-game. He (and his wife) are big time jerks.