Hiatuses in sports put life in perspective for Bill Self 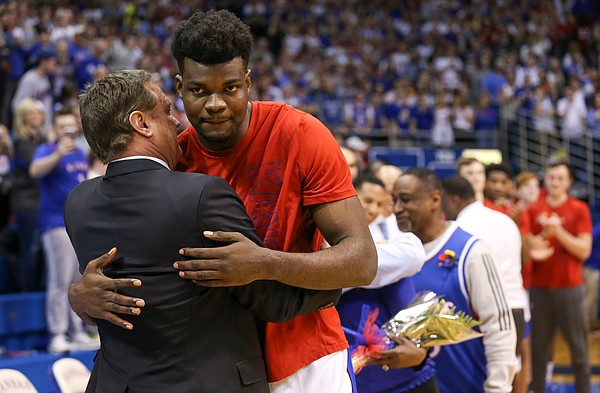 Kansas head coach Bill Self hugs Kansas center Udoka Azubuike (35) as he is introduced to the Allen Fieldhouse crowd on Senior Night. by Nick Krug

Life has a way of reminding people about what’s actually important and what’s ultimately of far less consequence.

On a Monday afternoon that many of us would’ve spent scrutinizing the still fresh NCAA Tournament bracket, and maybe even getting into occasionally heated debates about which teams could or should actually advance, many local media members dialed in to a teleconference to hear from Kansas basketball coach Bill Self.

The conversation, of course, had nothing to do with the Jayhawks’ upcoming path to a national championship, but rather the unforeseen and surreal way the postseason came to a conclusion before it even really got started.

The head coach of the No. 1-ranked team in the country spent plenty of time discussing how life has changed for his players and how the canceled tournament could impact what’s to come on a number of fronts. But Self diverted briefly to consider how sports actually might have played a momentous role in this country by getting people to recognize the seriousness of this COVID-19 pandemic.

“How big of a positive was it that Rudy Gobert tested positive?” Self said of the Utah Jazz center contracting the virus and essentially putting the entire NBA season on pause.

Gobert's diagnosis came this past Wednesday, which in its aftermath now feels like a month ago. The NBA suspending play became a tipping point for sports leagues throughout this country. And a worldwide story that might have seemed too far away for some in the U.S. to take seriously just a week ago suddenly became a lot more real.

Self marveled that sports as we know them getting wiped out actually became a driving force behind a movement, with more people paying attention to the virus and the possible repercussions of it spreading.

“I do think that could be a positive that came out of this — a very big one,” he said.

Indeed, this abnormal new reality for the Jayhawks and everyone else comes with some life lessons. According to Self, one that hit home for him is that everything is relative.

That’s been one of the most sobering aspects of existing in the sports world this past week. Those of us who are fortunate enough to be tied to the industry in one way or another have been reminded that the drama and intrigue surrounding sports may be captivating at times, but it lacks the gravity of these unpredictable days in which we now exist.

“I do feel so sorry for local businesses and people employed at local businesses,” Self said. “And how do they keep the doors open and stay in business? There are so many things going on in addition to health that it certainly got everyone’s attention. And I do think sports has helped create that.”

Maybe Self’s right, and this country is now a little further ahead of schedule in responding to this outbreak than it would’ve been without the sports world taking the lead. If sports helped just a little, it’s a nice reminder that they have the potential to make a far-reaching impact for good sometimes. Once in a while sports can be more than just a game.

I'm wondering how long you guys can keep coming up with things to write about that people want to read about? Must be a pretty stressful time for some in the sports newsroom these days.

I am sure they can find a good game of Fortnite to write about.

Thanks, Dale. It is. But we've got a whole bunch of ideas in the can already and many more on the list to write. There's some fun and creative stuff in the works!

In addition to continuing to do our jobs for a paycheck and some sense of normalcy, we recognize that keeping the content cranking to give people something to read as a distraction from all of the craziness out there is more important than ever right now.

So you can count on us to keep doing what we do and hopefully people far smarter than us can get this virus under control.