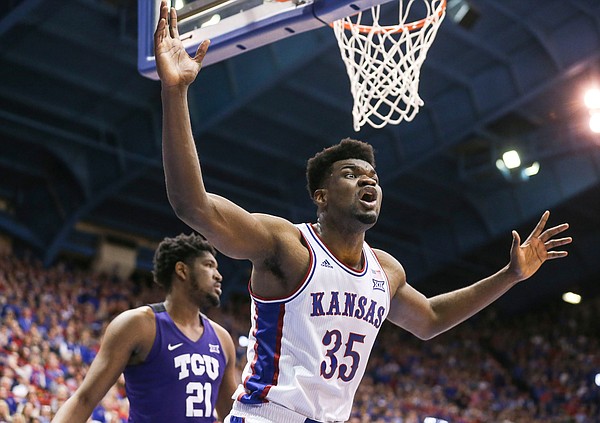 Kansas center Udoka Azubuike (35) reacts to a three second call against him during the second half, Wednesday, March 5, 2020 at Allen Fieldhouse. by Nick Krug

You thought watching your favorite team get upset in the first or second round of the NCAA Tournament was tough. Welcome to the truest form of March Sadness.

The idea of any basketball being played this weekend or in the weeks to come toppled, domino style, beginning Thursday morning. As conferences nationwide canceled their postseason tournaments, the trend reached the Big 12 and the Sprint Center less than an hour before a quarterfinal between Texas and Texas Tech was supposed to tip off.

By the afternoon, the NCAA and its board of governors went ahead and canceled the entire postseason. No Selection Sunday. No brackets to fill out. No buzzer-beaters. No Cinderellas. No Final Four. Not even “One Shining Moment.”

This is all, of course, for the greater good of society. Health experts far more knowledgeable about this novel coronavirus and how it spreads than those of us who wanted to watch more basketball advised against these games and the March traditions that we’ve come to know and love. It was a prudent move, reached with the well-being of people who could be fatally impacted by COVID-19 in mind. Even if it took the NBA, NHL and MLB all suspending their games for the NCAA to take a similar action, the people in charge of the March Madness moneymaker finally followed the ethical route.

But it’s OK to be disappointed in the result, sensible as it was. Imagine the sorrow college athletes throughout the country are still experiencing, and will continue to deal with, in the wake of this unprecedented measure.

It’s hard to dream up a more let down group of players than those on the Kansas basketball roster. The No. 1-ranked Jayhawks hadn’t lost a game since Jan. 11. They were in position to become the No. 1 overall seed in the national championship tournament, with the help of two potential all-Americans, Udoka Azubuike and Devon Dotson, and a defensive guru, Marcus Garrett.

They had zero clue this past Saturday in Lubbock, Texas, when they beat the Red Raiders for an outright Big 12 title that it would be the last time they ever competed together. The Jayhawks looked like a team that could play nine more times — three in the Big 12 Tournament and six more in the NCAA Tournament — cutting down more nets and acquiring more postseason hardware along the way.

Instead, it’s all suddenly over.

For months, the lives of these players revolved around gearing up for this 2020 postseason. Now they’re no doubt left with a sense of emptiness, because the bizarre circumstances of these times meant they didn’t even get a chance to go validate their incredible regular season with some postseason glory.

For Azubuike, a senior, and Dotson, a likely early NBA draft entrant, this must be unfathomable. They were poised to write their own memorable chapters in KU’s storied program. Maybe even leave as legends. Like Danny Manning or Mario Chalmers. Now they and their teammates become an all-time what-if in KU lore.

Unfortunately for college athletes and fans everywhere, this unique brand of March Sadness extends to sports everywhere. President Mark Emmert and the board of governors determined the best way for the NCAA to prevent further spread of COVID-19 was to cancel all remaining winter and spring championships. That means no title runs for college athletes in basketball, ice hockey, wrestling, gymnastics, track and field, lacrosse, baseball, softball, golf and tennis, to name a few.

We’ve never seen anything like this. And hopefully we never will again.

As everyone continues to process this odd non-postseason, it’s OK to both appreciate that people involved in sports are doing everything they can to limit a pandemic, while also expressing regret over how March of 2020 came to an abrupt conclusion.

The only fair thing for the NCAA to do is give all seniors another year of eligibility!

I'm reading that several coaches suggest the seniors be given an additional year of eligibility by the NCAA if they want it and that the schools be given the extra scholarship allotment for those who choose to take advantage of it. While it is unlikely the NCAA will agree to that, should they decide to do so they really need to do it soon since these kids, the seniors and those likely to go pro, need to make decisions.

You know, KU is going to always be in it. We're always going to be there. How about Dayton, can they ever climb that high again? Or just saw the Hartford Hawks, one game away from their first tourney appearance, ever, only to have that pulled away.

I wish they had let that one Big East game just finish instead of calling it at the half. Just let them finish their game, so at least a few players would have the knowledge that they were playing in their last game before it was over.

But I'm just massively depressed right now. This is my favorite time of the year for sports.

Is there a chance this could be re-visited and resume the NCAA tournament in mid April?

I would doubt it - players aren't even practicing or if they are, it's probably pickup games without coaches. It's supposed to be all athletic activity - KU's spring football training is cancelled. So I wouldn't think they'd pick it up in mid-April and be ready to play games even with a week or two warning/heads up. Had they said "suspended" instead of "cancelled", schools might still be practicing, while hoping for resumption. The NCAA said "cancelled", so I don't think there's any way to gear up again. Some schools have even sent students home so they're not clustered together in large classes or dormitories, so that makes things even tougher to get back together.

Just declare KU the #1 team at the end of the regular season, print a special banner, and plan ahead to 2020-2021, while hoping even that gets figured out.

I hope that we all honor this amazing team in years to come. They should be considered as they are: one of the all-time great KU teams. And there should be some type of honor for being a unanimous number 1 at the end of the regular season. How many times has KU ever accomplished that?

I know that it was the right thing for the NCAA to do, but I feel so heartbroken and empty, and I can only imagine what these players must be going through. I also have a lot of sympathy for players and fans of teams like Dayton, San Diego State and Rutgers, who who had seasons almost unheard of for their programs and now have no chance to prove themselves against the big boys.

Especially in the case of Rutgers. They haven't played in the tournament since 1991 and haven't won a tournament game since 1983.

i have no words that can express how i feel

This is March sadness, but it is also April, May, and June lunacy. Shutting down everything months in advance is just knee jerk idiocy.

Screw the NCAA. Time for all the universities, coaches, conferences and legislators and composite brain trust in this country to start their own postseason tournament and run it on their terms.

Think it can't be done? Oh it absolutely could be. There's enough money, knowledge, infrastructure, and power to make something like that happen.

Enough of the NCAA making unilateral decisions that affects thousands of people. Enough of one person (Mark Emmert) making decisions on over 25 different athletic sports without hearing and listening to the leaders and experts in each sport. Let those people as a group come together and make those decisions. Maybe there was a way to still make the tournament work, whether via postponement or changing the format temporarily for one season or another way I can't think of right now.

You know what none of the professional leagues did, cancel everything outright without letting things play out and then reevaluating. I don't want to hear how the NCAA has no time to delay any sporting events or postpone anything because of student requirements. There can always be adjustments and protocols put in place depending on the situation if it calls for it.

The NCAA sucks for so many reasons and I'm not mad that they took actions in response to a health crisis, I'm mad they took no time to evaluate and made rash decisions without consulting people who are involved in the sports directly and getting their input.