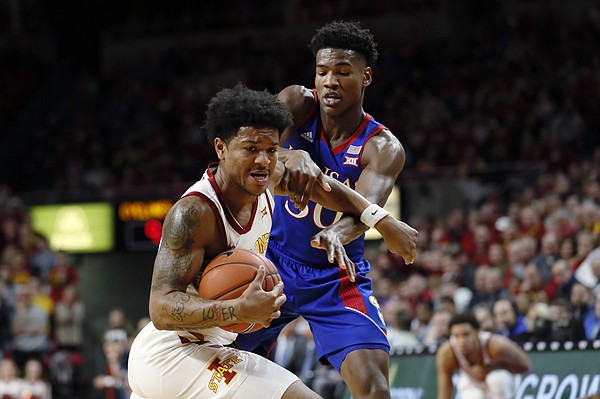 Ames, Iowa — Grades for five aspects of the Kansas basketball team’s 79-53 win over Iowa State on Wednesday at Hilton Coliseum.

• The Jayhawks hit more than 50% of their shots in a game for the first time since their romp over Kansas City at Sprint Center. Scoring 30 points int he paint — 10 layups and five dunks — set up the nation’s No. 3 team for a high percentage kind of night and KU rolled by converting 28 of its 54 shot attempts (51.9%) overall.

• KU also enjoyed one of its better 3-point shooting nights at ISU, going 10-for-19 from deep — marking the only time so far this season the Jayhawks connected on at least half of their attempts from behind the arc.

• This isn’t a great Iowa State team, but the Cyclones have been good offensively this season. They entered the matchup with KU averaging 80.2 points per game and shooting 46.4%. However, the Jayhawks limited ISU to 34.5% from the field and 8-for-28 (28.6%) from 3-point range.

• The Jayhawks’ defense on star ISU guard Tyrese Haliburton, a stellar shooter and passer, set up the rout. Haliburton only yielded 2-for-7 shooting and 5 assists in 36 minutes.

• Both Udoka Azubuike and David McCormack got their chances to shine in KU’s impressive road win.

McCormack didn’t even let a rough start weigh him down. Early on in the first half, he kept hurrying and missing on one possession but his insistence on keeping with the play eventually paid off. His series of offensive boards would set up one last emphatic finish for the sophomore, on a lob from fellow big man Azubuike. McCormack came through with 16 points and 7 rebounds in the win.

• Azubuike might have impressed most at the foul line, by connecting on 4 of 5. But he also bothered Cyclones in the paint at times with his presence defensively, and also came away with 10 points and 7 boards.

• Devon Dotson took advantage of ISU’s lacking defense, and delivered one of his best offensive games of the year.

Dotson put up 20 points, 5 rebounds, 6 assists and 3 steals, with 2 turnovers in 34 minutes of playing time. The sophomore point guard nailed 2 of 5 from 3-point range and went 7-for-13 from the floor, scoring five layups.

• Ochai Agbaji came out of the gate knocking down a 3-pointer and the sophomore proved much more of a factor offensively at ISU than he was in KU’s Big 12 opener. Agbaji finished 6-for-7 from the floor and drilled 4 of 5 from long range on his way to 16 points.

Like Dotson, Agbaji’s defense was crucial, too, as the Cyclones’ guards couldn’t get rolling.

• Marcus Garrett hurt his ankle pretty badly early in the first half, limiting his effectiveness in the win. He played 19 minutes and totaled 4 points, 3 rebounds, 3 assists and 3 steals.

• Freshman Christian Braun continued his upward trend in his first ever Big 12 road game. Braun looked very much like the stellar 3-point shooter his teammates so often describe him to be, burying 3 of 4 from downtown.

Braun’s not just a shooter, either. He grabbed 5 rebounds and dished 2 assists, while also playing a key defensive role on the perimeter.

• KU at least got some minutes from other substitutes without losing momentum or their hefty lead.

Benton, is this a synergy type of scoring? The total is greater than the sum of its parts? In other words, The offense gets an A- and the defense gets an A- but none of the pieces included in the score is better than B+?