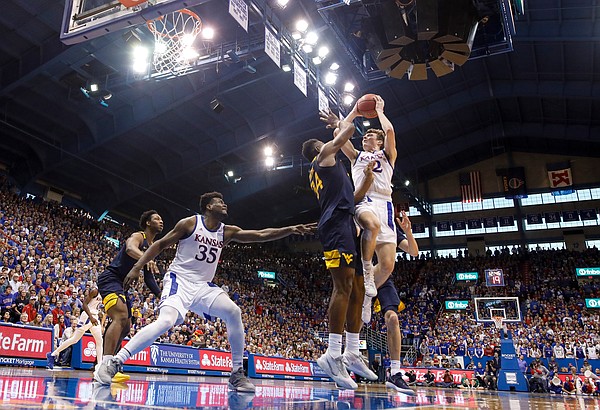 Kansas guard Christian Braun (2) goes hard for a bucket and a foul against West Virginia forward Oscar Tshiebwe (34) during the second half, Saturday, Jan. 4, 2020 at Allen Fieldhouse. by Nick Krug

One poor opening to one Big 12 game isn’t going to cost Kansas big man David McCormack his starting job. But even if head coach Bill Self keeps the sophomore forward in that first unit for the remainder of the season, the Jayhawks still need a definitive four-guard lineup their coach can trust.

Self just may have found one in Saturday’s win over West Virginia, when McCormack’s presence in the first half wasn’t helping KU’s chances against the rugged Mountaineers.

That combination could become KU’s best lineup as the Jayhawks trudge their way through the conference schedule, with March Madness getting closer by the day.

This particular group of five players didn’t revolutionize what Kansas can do on the floor this year — Self said his team went from “awful to bad” offensively with four guards. Still, most college basketball teams can’t defend like WVU does. Plus, Self’s tough guy lineup endured that challenge, often willing its way to high-percentage shots in the second half, when such looks felt impossible to discover in the first.

Self rolled out the Garrett, Dotson, Azubuike, Agbaji and Braun lineup to open the second half, with the Jayhawks trailing 30-24. By the end of a 60-53 KU win that group played 15:59 together, and when they were on the floor KU outscored WVU by 18 — 34-16. The Jayhawks scored 1.26 points per possession with those five on the court, better than any other combination Self used versus the Mountaineers. The second-best offensive lineup (Dotson, Braun, Agbaji, Azubuike and Isaiah Moss) scored 1.06 points per possession.

These five resilient Jayhawks worked well defensively, too. Remember: They played 16 minutes and WVU put up just 16 points against them. And Self might have been able to stick with those five for even longer if Garrett hadn’t picked up his fourth foul with nine minutes left.

This lineup functions offensively by giving Azubuike the space he needs to operate in the post and catch lobs off screens, and featuring two of the team’s best 3-point shooters, Agbaji and Braun. Keep in mind, those two weren’t even a factor from beyond the arc (1-for-6 combined) against WVU and the lineup still thrived against what projects as the Big 12’s toughest defensive team.

Self thinks this KU roster can deliver a special season if its shooters knock down 3-pointers, so Agbaji (25-for-66 from deep this season) and Braun (8-for-23) will need to make that happen for the Jayhawks to truly become devastating offensively. It will be easier for all of KU’s players to find open looks from downtown against other opponents. WVU ranks fourth nationally in 3-point field goal defense, holding teams to 24.9%.

Back in November, when the season began, it wasn’t clear which four-guard lineup would be KU’s best. Senior transfer Moss was obviously the team’s best shooter, making him a leading candidate to play with Dotson, Garrett and Agbaji around the powerful Azubuike. Freshman Tristan Enaruna, too, looked like a legit option, with his versatile game on both ends of the floor and long wingspan. But if Braun, whose steady improvements of late have turned him into a reliable role player, can avoid any type of freshman skid, he’s the man for the job.

It’s far better for KU (11-2) to have a go-to lineup than always having to mix and match and tinker to find one. The group that led the Jayhawks out of the muck against West Virginia has some work to do to peak, and these five appear to have the physical and mental fortitude to mesh and grow together to pull that off.

KU will still need McCormack, Silvio De Sousa, Moss and Enaruna, too, of course. But its emerging four-guard lineup looks like one that can raise the Jayhawks’ ceiling.

Braun looks really composed. Handles the ball well and passes decisively, with vision and creativity. He's going to be an important playmaker at some point in his career. I'll take sooner, if we're choosing.

I seem to recall reading Self's earlier comments being that D responsibilities were the only thing holding him back. Sounds like he's figuring that out now.

I think Enaruna will end up being an important piece this season, too. And I expect Moss to come out of his shooting woes and become another important cog in the machine.

Self has admitted multiple times this season that the smaller lineup is better and yet he still starts the game with McCormack and Dok. I don't get it.

Personally I think its a good strategy. Start Big and if it works then stick with it. If not, after playing against two big men for five minutes or so, changing to defending against a four guard lineup is a significant adjustment and can also throw you off balance. Plus, there is no better way to develop our big men than by playing them. I also like our ability to rotate in the others and mix it up even further. KU's versatility should be a big advantage going into March.

If you start one way and only play one way over and over and over even average teams can come with a strategy that can sometimes be affective against better teams.

I gave you thumb-up for the 2-big strategy for a starter, but to agree that 'there is no better way to develop our big men than by playing them', we have to see multiple plays, not just high-low post play. This kind of play will not develop the bigs that much. You've seen the problem with high-low inbound pass against elite defensive team, either the pass gets deflected, or a swarm of defenders trapping the bigs - TOs, TOs, TOs. You want to develop our bigs, have them play screens, lobs, MOVE WITHOUT BALL, get into attack mode - always in motion, two-hand dribble, up & under move, limited one two dribble move. That'll develop them to be an elite scorer. Having them standing around, awaiting for a perfect inbound pass will only work against weaker defender/team. It's a recipe of getting defeated, otherwise. You see how effective our bigs with lobs play. We need another Devonte in the team!!! Better yet, 2-3 Devontes since we have 3 bigs to feed!!!! Any of our guards are capable to assume that role.

And what happens if we start two bigs and get down early in a tough Big 12 road game and can't come back?

I like the two option offense. Having that only creates more problems for the opponent. I think the opponent we are facing each game may end up being the deciding factor as to which starting group we go with, and if that group is not being effective, then switch to the other group. All of our starters need to be more aggressive at the start of the game. Deliver a knock out punch like WV did to us. Take the ball to the hoop more, get to the line. Open looks from outside will follow if we set the tone of taking the ball down hill.