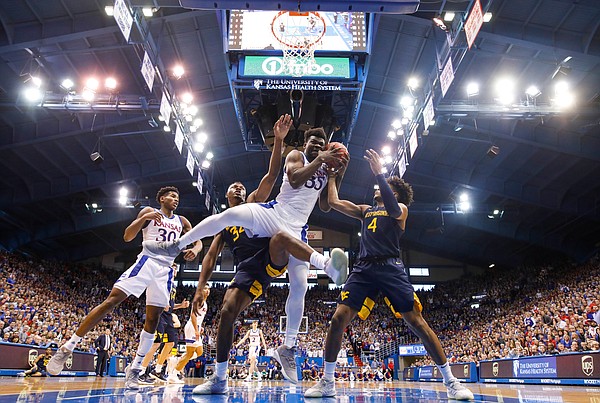 Kansas center Udoka Azubuike (35) gets tangled with West Virginia forward Oscar Tshiebwe (34) and West Virginia guard Miles McBride (4) for a rebound during the first half, Saturday, Jan. 4, 2020 at Allen Fieldhouse. by Nick Krug

Quick grades for five aspects of the Kansas basketball team’s 60-53 win over West Virginia on Saturday at Allen Fieldhouse.

• Hardly any of the Jayhawks looked ready for West Virginia’s physical defensive style in the game’s opening minutes, and the Mountaineers built a 17-7 lead less than 8 minutes in.

Nine Jayhawks played in the first half, and only three scored: Marcus Garrett, Devon Dotson and Udoka Azubuike.

• Relatively speaking, KU’s offense picked up in the second half, even if most possessions wouldn’t qualify as pretty. The offense came more easily for the Jayhawks, though, as they mostly rolled with four guards.

• KU’s players certainly heard from head coach Bill Self and his staff that finishing on defense would have to involve extra effort on the glass, to keep WVU from getting offensive rebounds and easy second-chance points — a staple of Bob Huggins teams for years.

Yet the Mountaineers found those extra looks that extend possessions and dishearten opponents by grabbing offensive rebounds early in the first half, as they build their lead.

With Oscar Tshiebwe destroying KU on the offensive glass, WVU scored 10 second-chance points in the first half alone.

• KU’s defense also didn’t protect the paint too well early, despite having the bodies to do so. WVU put up 14 points in the paint by halftime.

• The Jayhawks’ defensive efforts improved dramatically in the second half, as Self relied on Dotson, Ochai Agabaji, Garrett, Azubuike and Christian Braun as his primary lineup, until Garrett got into some foul trouble.

The Mountaineers shot just 7-for-25 in the second half and turned it over 11 times.

• Udoka Azubuike spent a lot of the first half getting fouled by WVU and going to the free throw line, where he’s known to struggle, instead of getting the chance to score inside.

Once KU began using a four-guard lineup in the second half, Azubuike found his offense coming much more regularly. With KU’s guards having the room to drive and set him up or throw lobs up to the rim, Azubuike finished with 17 points and 11 rebounds.

• Starting big David McCormack spent much of the first half on the bench, once KU went away from its two-big look. Though the 6-foot-10 sophomore had the physique to match up with WVU’s bigs, he wasn’t too effective against them on either end of the floor.

McCormack played just 10 minutes against WVU. But he had a massive defensive rebound followed by a one-handed alley-oop around the 3-minute mark of the second half.

• For portions of a fistfight of a first half, it seemed Dotson was the only Jayhawk who could score from the field — not that KU was exactly cashing in at the foul line, either.

The sophomore point guard made both of KU’s first-half 3-pointers and scored on a couple of layups, too.

Dotson finished the victory with 16 points on 5-for-15 shooting.

• Meanwhile, junior Garrett was often the only Jayhawk who could create shots for teammates against WVU’s stellar defense throughout the Big 12 opener. Garrett had 3 of KU’s 4 assists in the first half, when the Jayhawks also suffered 10 turnovers.

Garrett’s distribution skills set up a tying 3-pointer early in the second half, when he drove to kick to Agbaji for a right-corner 3. There was plenty of time to play, but it was one of the few sequences in the game to that point when KU seemed to have some life on offense.

Garrett contributed 12 points and 6 assists. HIs drive and layup near the 1-minute mark put KU up 54-49.

• Sophomore Agbaji played almost all of the first half but went primarily unnoticed, other than his defense. His ability on that end of the floor, though, proved crucial in such a physical game.

• KU’s bench contributions were few and far between through most of the first half. Isaiah Moss misfired on a couple of 3-pointers and the only sub who could be seen working particularly well was Braun, who looked tough on defense and held his own.

Braun impressed enough to open the second half as a starter, in place of McCormack. The freshman immediately helped out by grabbing an offensive rebound off a missed Azubuike free throw. Braun dished to the big man for an easy score.

The ever-improving Braun came through with 6 points and 5 boards.