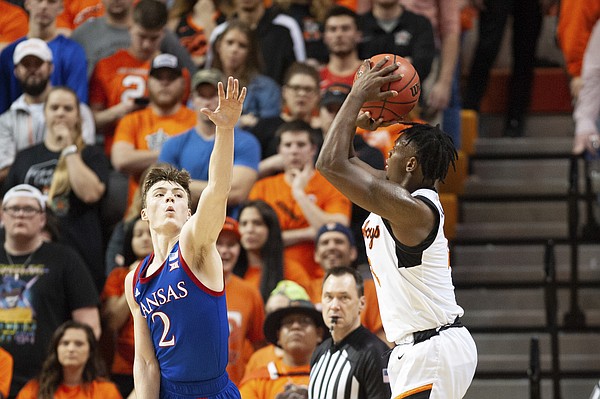 After the Kansas basketball team yet again went on the road and held an opponent to a scoring total in the 50s, Marcus Garrett didn’t mind calling the Jayhawks’ defensive effort “great.”

“We know they have some great 3-point shooters over there, and that was the key coming in, to try and limit their 3s,” Garrett said. “I know we’re known for giving up a lot of 3-point shots. So we were big on that, knowing how well they shoot 3s. We were trying not to give them any good looks.”

Strong as the Jayhawks’ defense has been this year, it wasn’t that long ago that the way they guarded the 3-point arc raised some eyebrows. But they are shoring that up, too, of late, making it even more difficult for opponents to score.

While Oklahoma State as a team hasn’t been that dangerous from 3-point range this season, the Jayhawks limited the Cowboys to a 2-for-18 night and rarely allowed OSU’s best marksmen, Thomas Dziagwa and Lindy Waters III, good looks at the rim from outside. Those two combined to go 0-for-5 from deep.

KU coach Bill Self said Thursday during his weekly press conference that he has noticed the Jayhawks (17-3 overall, 6-1 Big 12) improving their defense of the arc over the course of the past few weeks.

And Self isn’t basing that opinion off shooting percentages. As he pointed out, the Big 12 hasn’t been a good 3-point shooting league. Besides, he said, statistics can be misleading.

When Self says he’s noticed his players doing a better job of defending against shooters, he’s talking more about the Jayhawks following their scouting reports and executing strategically.

“The one thing I would say that we've done a better job of is we’ve run more people off the line,” Self said.

Limiting their opponents’ quantity and quality of 3-pointers is taking an already impressive KU defense to another level.

“I believe, since conference play started,” Self said, “there hasn't been near as many attempts, as what there was prior to that.”

He’s right, of course. During nonconference action, KU opponents hoisted 28.5 3-point attempts a game, and averaged 8.3 makes. Since league play began for the Jayhawks, their foes (including Tennessee in the SEC/Big 12 Challenge) have attempted 20.6 3-pointers on average and made 6.1 a game.

The Jayhawks’ opponents hit 29.2% of their 3-pointers in their first 12 games, in November and December. In the eight games since Big 12 play began on Jan. 4, KU opponents have hit 29.7% from downtown.

In a game KU led by as many as 27 points in the second half, the Cowboys only attempted six 3-pointers in the game’s final 20 minutes.

“I think we picked it up after halftime,” freshman Tristan Enaruna said of KU’s defense. “Coach talked to us in the locker room and reminded us of everything, reminded us about their guys and what they do a lot. I think we did a good job being sharp with that and implementing those things.”

Kansas center Udoka Azubuike on importance of having a backup center by KUsports.com

KU sophomore Ochai Agbaji on how four-guard lineup impacts the way he plays by KUsports.com

KU has never guarded the three since the time of Roy and that’s why we lose in the tournament every year.

Remind me of how many titles we won under Roy.

Especially against less superior teams, we've been really improving in D, especially the way we switch - even bigs help out, too. I guess coach BS learned well from Jay. It's good to prepare the team early. Expect lots of 3s raining down in March.

Presumably, coach has figured out you don’t need the sag on a driver when you have you Udoka waiting for them. This allows our guards to stay outside on the shooters.

Coach has figured out. Now that’s funny. So glad he’s catching up to our understanding of the game. Not that it has anything to do with player development and learning to follow the direction of people in the HOF.

It is new this year that Dok is moving so much better on D. Gaining the anticipation from experience to be able to block more shots and control the boards. It hasn’t been that way in the past and we haven’t had capable subs behind him too much of the time. They knew then and we even discussed it. Some even said it would never change. So glad the team has continued to develop by working with such an amazing staff.

Don't forget to mention that the coaching staff seems to open up on shooting 3s recently, too. Hmmm.. I wonder why Frankamp left the team back then. HOF or not, does not matter. Many colleges, led by not an HOF, have produced and developed players. So glad we can finally enjoy lobs and dunks..... after how many games? Oh, maybe not in every game, because coach BS is an HOF, who's very crafty in strategy. Give me a break.. Until a coach wins multiple NCs, develops players every season with team who plays real basketball - HOF does NOT mean a thing. Yes, if he can breed a team like '07-'08 and win an NC again and again. This is UNIVERSITY OF KANSAS. Rock chalk!!

the UNIVERSITY OF KANSAS

So the ‘08 team excelled at lobs and subsequent teams have not because Coach Self decided after winning a NC that lobs weren’t a good idea? Such a comedian.

Maybe the’08 team excelled at lobs because the players were good at it.

Maybe Devonte’s team excelled at 3pt shooting because they were good at it.

Maybe the coaching really hasn’t changed. Maybe it’s still learning what players are naturally good and at teaching them to be better.

And maybe the armchairs still deserve their occupants.

David - It would be great if you did not go on but if you do choose to hopefully you can do so with complete and intelligent thoughts, though there is value to comedy routines. Rock Chalk.