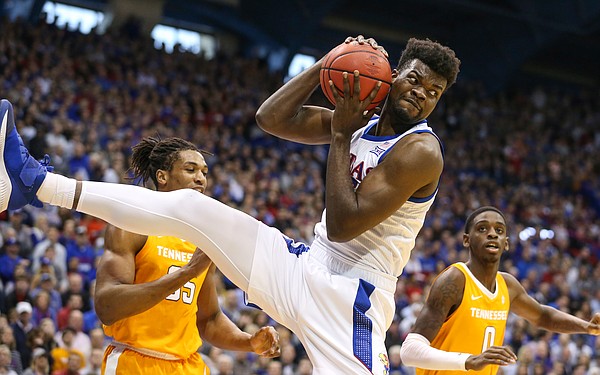 Kansas center Udoka Azubuike (35) comes away with an offensive rebound during the first half, Saturday, Jan. 25, 2019 at Allen Fieldhouse. by Nick Krug

Quick grades for five aspects of the Kansas basketball team’s 74-68 win over Tennessee on Saturday at Allen Fieldhouse.

• The Jayhawks got off to a slow offensive start, with a couple of turnovers and a 2-for-7 shooting mark — with one of those makes coming on a goaltending call.

• KU opened 2-for-10 from the field before its guards began seeking out the paint instead of settling for jumpers. The offense picked up for a few minutes with the improved approach, but it became harder for everything to function when Udoka Azubuike left the court with foul trouble.

• Once Azubuike returned for a stretch, the Jayhawks thrived, going 6-for-9 from the floor in the minutes leading up to halftime. The Jayhawks were shooting 48.4% with 3 turnovers at the break. They scored 22 of their 37 points in the paint.

• KU’s defense took a serious hit when Bill Self had to play five guards, because Azubuike picked up two fouls midway through the first half. The Vols scored in bunches, inside and out, as KU’s five-guard lineups had trouble making stops.

• But after Azubuike checked back in with a little less than 6 minutes left in the first half, the Vols only scored two more baskets before halftime.

• Tennessee shot 50% from the field in the first half but turned the ball over 9 times.

• Azubuike’s teammates had a hard time getting the ball to him inside early on against the Vols. It took a little more than 8 minutes of action before the 7-foot senior finally got a field goal attempt, as a Devon Dotson attack off the bounce drew the defense up the paint and the point guard lofted up a lob pass for an easy Azubuike slam.

• The big man’s offensive success in the first half soon proved short-lived, though, once he picked up his second personal foul with 10:46 left until halftime.

• He returned at the 5:48 mark, with KU down, 26-19. Within seconds he was catching a pass in the paint and finishing with a slam.

Appropriately, getting Azubuike the ball inside became a priority and the Jayhawks’ offense played its best stretch of the half with the guards repeatedly setting him up in ideal spots to turn and finish. The only KU big on the active roster put up 9 points and 5 rebounds in the first half, helping his team take a 37-30 lead into halftime.

The big man went for 18 points and 11 rebounds and 4 blocks on the afternoon, with his defense dominating the game’s last couple of minutes.

• Sophomore point guard Dotson was in attack mode throughout the first half, driving to both score the ball and dish to open teammates. By halftime Dotson had 5 assists, more than he posted in any of his previous three outings.

Dotson’s speed made a real difference for KU, as he kept finding lanes for layups, and he produced 22 points and 7 assists.

The points kept coming early in the second half, with Agbaji finishing an alley-oop and draining another 3. The sophomore guard finished with 16 points.

• In a rare start, senior Isaiah Moss didn’t always look totally comfortable early on, making a few ill-advised passes. Moss went 1-for-5 in the first half, finishing one layup through contact, and misfired on all three of his first-half 3-pointers.

• Marcus Garrett’s assertive offensive mindset never looked tougher than when he went up in transition one-on-one to attempt a dunk over the Vols’ Olivier Nkamhoua. He took an elbow to the head for his efforts and crashed to the floor hard. In typical Garrett fashion, he got right back up and kept playing.

Most of Garrett’s work came on the defensive end, where he swiped 4 steals.

• With KU’s rotation down two bodies due to the suspensions of Silvio De Sousa and David McCormack, there weren’t many expectations for the bench’s production versus Tennessee.

• With Moss stepping into the starting lineup, freshman Christian Braun became the sixth man for the Jayhawks. The offense looked stale and passive in the opening minutes, until Braun came in and took an assertive approach on a drive and tough finish for a layup.

Braun started the second half instead of Moss. The freshman came away with 7 points and 4 rebounds and looked assertive more often than not, even when shots weren’t dropping for him.

• Freshman Tristan Enaruna became the unlucky guard who had to play center when Azubuike wasn’t on the floor. The Jayhawks’ defense was impacted most during those minutes.