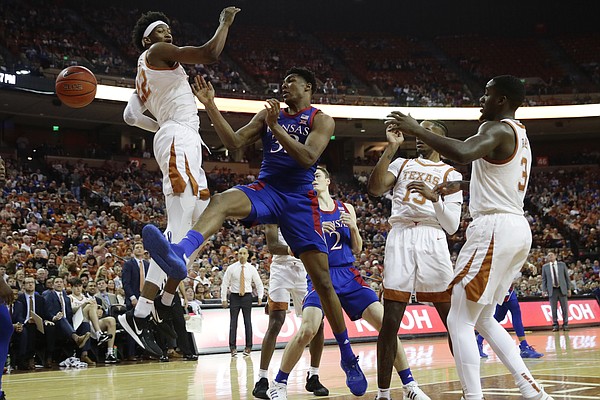 Kansas forward David McCormack (33) loses control of the ball as he tries to score past Texas forward Kai Jones (22) during the first half of an NCAA college basketball game, Saturday, Jan. 18, 2020, in Austin, Texas. (AP Photo/Eric Gay) by Associated Press

Anyone out there pondering the pros and cons of the Kansas basketball team continuing to start two bigs — even though it ends up playing more four-guard lineups — isn’t alone.

Bill Self is right there with you.

While the Jayhawks’ head coach has started sophomore forward David McCormack in 16 of KU’s 17 games, Self these days seems more contemplative on the matter.

The way he explained on Monday his recent line of thinking, Self suggested slightly altering the starting five was on his mind this past week. He may have even come closer than ever to switching it up for one of KU’s road games at Oklahoma and Texas, but the moving parts gave him pause.

The Jayhawks didn’t know for certain going into those games whether sophomore point guard Devon Dotson, who was dealing with a hip pointer, would be able to play. Before the game at UT, Self said, if he decided to start senior guard Isaiah Moss instead of McCormack, and then Dotson wasn’t cleared to play, he would have essentially been taking McCormack out of the starting five just to put him right back in. The coach didn’t want to “mess with” his big man’s mind with any juggling.

“So I thought it was best just to leave a status quo,” Self explained, “so you’re only messing with one guy, as opposed to messing with two.”

Dotson, of course, ended up returning and starting at Texas, so Moss, who started in Dotson’s place at OU, was the only Jayhawk waiting to find out his role at UT.

The approach worked, as Kansas (14-3 overall, 4-1 Big 12), now ranked No. 3 in the nation, won back-to-back road games. But the fact that he thought so hard about the starting five leads one to wonder whether Self’s more open than ever to making a change.

He said Monday, ahead of KU’s Sunflower Showdown with Kansas State at Allen Fieldhouse, he doubted one was imminent. Even so, Self went on to describe a potential benefit of starting Moss.

“We know that our five most productive players on the floor is with Isaiah in the lineup,” Self said, clarifying that five-man group teams Moss with four other KU starters, Dotson, Marcus Garrett, Ochai Agbaji and Udoka Azubuike. “Stats, analytics prove that out.”

To Self’s point, in Saturday’s win at Texas, that lineup played 15:36 and outscored the Longhorns, 28-18, while committing three turnovers. The starting five, with McCormack on the court instead of Moss, played 7:32, was outscored, 15-10, and turned the ball over once.

McCormack, a 6-foot-10, 265-pound sophomore, still brings a different kind of presence to the floor that Self appreciates. The coach valued the big man’s play so much at UT that McCormack logged 20 minutes, a new high for him this season in Big 12 play. The starting forward who so often plays a backup’s minutes contributed 6 points and seven rebounds.

More importantly, overall, lineups with McCormack worked against Texas. When he was in the game, the Jayhawks outscored UT, 34-24. When McCormack sat, Texas outscored KU, 33-32.

“From a chemistry standpoint, I think up until this point it’s still been best for us to go the way that we've been going,” Self said of starting McCormack, “because you're still going to have ample opportunities to have that other lineup.”

Self wants KU to have experience playing bigger in case the Jayhawks need that type of lineup at some stage of the NCAA Tournament. And while a change to the starting lineup wouldn’t make getting those in-game repetitions impossible, it’s easy to see how it could be less appealing. Self didn’t hide the fact that KU has been better with four guards this season. If he removed McCormack from the starting lineup and gave the spot to Moss, carving out time to use two bigs probably isn’t going to give KU much of a spark against most teams.

Plus, if KU started four guards around Azubuike and didn’t at some point play two bigs, it would become even harder to find McCormack the minutes Self thinks the big man deserves.

Right now, Self is trying to take into account both chemistry and data as best he can.

“It's something that I think’s fair,” Self said of sticking with McCormack, “and I've actually thought quite a bit about.”

To McCormack’s credit, he’s amenable to his coach’s instincts, even when those lead Self to play smaller. At Texas, KU opened the second half with its best four-guard look, and Moss in for McCormack.

“Same approach as always,” McCormack said of the eight minutes he spent as essentially a second-half reserve. “Control what you can control. Coach felt like it was a better lineup, like going smaller would give us a better chance to win. And that’s what I want. I want the benefit of the team. And, you know, it’s not the first time that he’s done that. So I just stick to it and give myself up for the team.”

Happy with McCormack’s play at Texas, Self said it was an example of why people shouldn’t get hung up on starting roles, based on how a certain player performs in one game, because McCormack “was probably better” than Moss versus the Longhorns.

“He just has a different type of role,” Self said of his sophomore big man. “But I know what I hope for, and it doesn't have anything to do with who starts. It has everything to do with how are we able to be successful playing two bigs? Because we're going to some. And then how do we maximize the opportunity to play small, which we have to the majority of time?”

“We’re still going through the process of trying to figure that out,” Self said of finding the proper combination of two-big and four-guard lineups, “but I do think getting some offense off the bench (Moss is averaging 8.1 points per game this year) hasn’t been bad for us.”

David McCormack on importance of rivalry with Kansas State by KUsports.com

Isaiah Moss getting more comfortable with Bill Self and KU by KUsports.com

why not start both DMac and Moss?

Why not! Looks to me coach has reserved a place for Ochai no matter how ineffective he is compared to DMac & Moss. Perhaps, Ochai is better defensively?

An Ochai playing well is an excellent thing to have. He has to play through the slump to get there. Good coaches give their high quality players that opportunity because it is best for the team. As I sit here watching our game with KSU, it appears that Ochai is getting it back.

Ineffective offense, but his efforts on D, rebounds earned him a spot. He's got the most floor burning points, too.

Agree. Why not start Moss and have Ochai Come off the bench. Teams respect Moss from 3 more than Ochai. Wouldn’t that open the middle for the bigs to have more success when playing together?