Jayhawks' bench gets smaller in 2nd half of road win 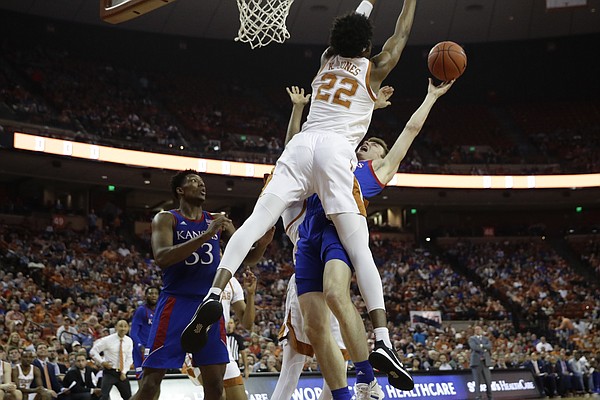 It wasn’t injuries that had the Jayhawks shorthanded. Rather head coach Bill Self decided for the stretch run he liked his chances with six players in particular.

“I obviously was so frustrated with the bench in the first half,” Self said after a 66-57 KU win, “that I really didn’t give them a chance to play.”

The only sub Self trusted to play in the second half at Texas was graduate transfer Isaiah Moss. After brief appearances in the first half, freshman Christian Braun (four minutes), junior Silvio De Sousa (two minutes) and freshman Tristan Enaruna (one minute) didn’t play at all.

KU’s bench got outscored, 13-5, at UT, marking the 10th time in 17 games this season an opponent’s reserves produced more points than KU’s. Moss, of course, scored all 5, shooting 2-for-3 from the floor over the span of 32 minutes. Moss knocked down one of KU’s two 3-pointers on the day in the first half, then buried a fadeaway baseline jumper in the second half.

That was the extent of KU’s bench scoring, making it the fourth time this season the Jayhawks’ reserves combined for 6 or fewer points, and the sixth time they failed to reach double-digit points.

“We’re not going to be any good over time unless Tristan, Christian and Silvio, not only give us more, but because I give them an opportunity to play more,” Self said. “But I thought we were so timid when we went to our bench (in the first half). So timid.”

Moss wasn’t exactly assertive at Texas, but just having KU’s best 3-point shooter on the floor helps the Jayhawks’ spacing on offense. That’s why the 6-foot-5 senior who played his first three seasons of college basketball at Iowa as a starter opened the second half on the court.

In fact, Self never subbed Moss out in the game’s final 20 minutes, when KU outscored Texas, 40-26.

As usual, it wasn’t KU’s starting lineup that spent the most time on the court. It was a four-guard look that made a difference, with Moss, over the course of the victory spending 15:36 playing alongside starters Marcus Garrett, Devon Dotson, Ochai Agbaji and Udoka Azubuike. That lineup outscored Texas, 28-18, and turned the ball over three times.

While Self found a group that worked in the ugly road win at UT, he prefers having more flexibility and expects more from the Jayhawks’ other backups. Their trip to Texas would have felt a lot less stressful for them if they could have gotten some productive minutes out of reserves not named Moss in the second half. But based on what he saw in the first half, Self didn’t even feel good enough about that possibility to give it a chance.

“We did enough,” Self said of the six players who helped KU win in the second half. “Not pretty by any stretch, but we did enough.”

Braun hadn’t played so few minutes since early December and seemed to have solidified his spot in the rotation. But Saturday was a reminder that Self has a shorter leash with freshmen and less experienced players and will lean on veterans if that’s what it takes to win.

Just like Braun, De Sousa and Enaruna will continue to get their chances in the weeks ahead. But they will have to impress Self when they check into a game to make sure they get additional cracks at contributing.

That will be even more important during KU’s five remaining Big 12 road games. Self says there are no upsets on the road, and he enters every one of them expecting it’s “going to be tight.”

He wouldn’t mind being proved wrong on the subject between now and the end of conference play if that meant KU’s reserves had turned a corner and helped the Jayhawks expand their leads when starters need some rest.

This team will be much better suited for a deep run in March if Braun, De Sousa and Enaruna are playing consistent minutes. And those won’t come without them showing Self they can play up to his standards.

I'm not sure when was the last time the bench was really productive. Certainly not this season yet, and not many times last season. We always seem to have good players, but it's rare recently that they can score. It wasn't always this way, I can remember seasons where the bench was productive. It's going to be a long season if Devon and Dok are the only two scoring options.

Part of the problem is that the bench are players who need to be set up to some extent by the remaining starters on the floor. If you watch them they are not in any position to make a play and if they are they don't get the ball. It takes guts to shoot an open shot, and when the leash is short a lot of guts, but guess what, if you never pull the trigger, and other teams don't guard you, then you're not helping and you're not going to get much playing time.

Braun can shoot and play defense Enaruna can rebound and play defense, and DeSousa actually played some decent D and did block a couple of shots. But again our team being a poor passing team hurts everyone. By now every player should know where every other player needs to receive the ball and make passes in motion to get the ball in the right place at the right time. Thank God we can drive it, but against really good teams that may not be enough.

Couldn't agree more with you on making a play for the bench players, Layne. I still say it's coach to blame. Kids look lost on what to do, can't blame them. It's coach's job to make offense flowing effectively for everyone. Other teams have no problems - our coach should go back and think how to best use of our bench players to their strengths. What I'm surprised this year is Dot's ability to set up others. He's great individually, but booooy... we really need help in passing - Garrett can't do it alone. But it all comes down to again, the system. We have very ineffective offense. Watch the game against Tex again, Braun did a very good drive but got double-teamed and lost possession - ding ding.. if he's coached right, NOT TO SIMPLY DRIVE (which I think that's what coach wants), he will pass the ball to the wide open big that's very eager to stuff the rim. It's the coach's fault. Heck, Agbaji can't even score. He's a starter. He never has that bouncy dribble, does not have a good ball handling mechanism. Teach him how to dribble with bounce, he'll take off and become very lethal dunker. He can only score off of a timeout, yes - the infamous backdoor cut designed by coach BS. Unfortunately, other coaches are already aware of this play. So, tough luck.

I often must remind myself every year that KU basketball is an elite program operated by an elite coach with extremely talented players.

I like winning as much as anyone, and I appreciate an ugly win. Life is mostly about grinding out and through tough spots.