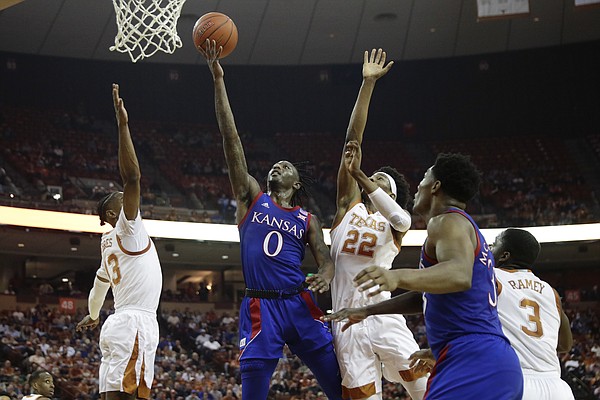 • The Jayhawks opened up their afternoon versus Texas looking for high-percentage offense and capitalizing. They picked up plenty of buckets at the rim off both drives and passes to bigs inside, outscoring UT, 12-2, in points in the paint eight minutes in, setting them up for an early 17-13 lead.

• However, KU fell behind soon after in the first half, mainly due to wasting offensive possessions. The Jayhawks had 6 turnovers in the first 12 minutes, and the Longhorns were able to take a 21-17 lead.

• KU finished its latest road trip with a 40-30 advantage in points in the paint. The Jayhawks shot 47% from the floor.

• KU’s first half woes worsened when it had lapses in defending the 3-point line. The Longhorns at times forced the issue with their attempts from behind the arc, but other times KU invited Texas shooters to fire away by leaving them open. UT led by as many as 8 points in the first half, when it connected on 5 of its first 9 3-pointers.

• The Jayhawks’ defense in the second half looked more active and UT began struggling to find points, even though their designed play out of the break led to a Sims alley-oop.

However, beginning at the 8-minute mark, UT found some new offensive life, with the crowd suddenly into it and the Jayhawks giving up a string of baskets inside.

• Udoka Azubuike had a hard time getting going offensively, primarily because the Longhorns did a great job of hitting him hard any time he caught the ball in the paint and had a chance at an easy basket.

Azubuike went 3-for-8 at the foul line and 2-for-3 from the floor in the first half.

The senior center put up 17 points and 9 rebounds.

• Most of KU’s lineups weren’t gelling offensively in the first half, so Bill Self actually played David McCormack more than usual, with him giving the two big combinations more chances. Most of McCormack’s impact came on the glass. And he threw a solid lob pass for an Azubuike jam when it looked like he was about to take one of his long jumpers.

McCormack finished with 6 points and 7 boards, as the minutes he spent in a reserve role in the second half provided KU with some punch.

• Back in the starting lineup after missing KU’s win at Oklahoma while dealing with a hip pointer, Dotson looked a little rusty, dribbling too long, resulting in a shot clock violation. He eased his way back into the flow with an early 3-point try and drawing a foul in the open floor to get to the foul line.

Before long, Dotson started looking more comfortable, and he actually ended up being one of KU’s more effective players in a rough first half, with a team-best 8 points.

Dotson played the entirety of the first half in his return to the lineup, and finished with 21 points and 3 assists in 39 minutes.

• Marcus Garrett continued to be a persistent driver in the half court and the team’s best passer and defender, but his shots weren’t falling early.

One of his second-half attacks off the dribble resulted in Garrett hitting the court hard after some body to body contact from Jericho Sims. The junior was able to return to the floor, though and finished with 13 points, 7 rebounds and 7 assists, after finding layups down the stretch.

• Ochai Agbaji struggled on both ends in 14 first-half minutes, and Self looked particularly disappointed in some of the guard’s defensive decisions.

Agbaji provided 4 points on 1-for-6 shooting.

• Competing on the road would have felt a little easier for the Jayhawks if they had gotten some production from their bench.

An Isaiah Moss 3-pointer in the late stages of the first half were the only bench points KU had as late as the midway point of the second half, when Moss hit a little fall-away baseline jumper off the dribble.