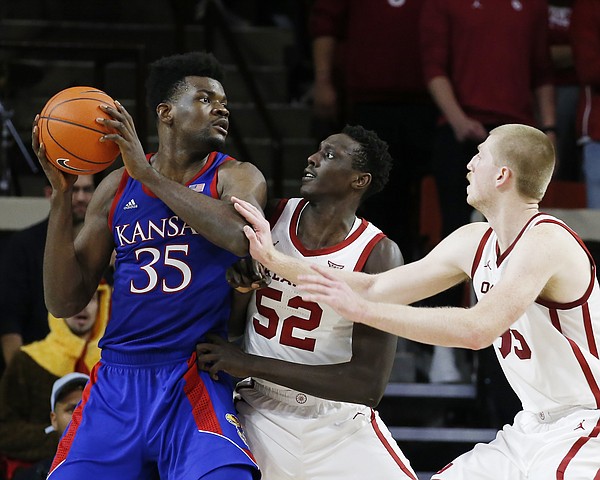 Kansas' Udoka Azubuike (35) is defended by Oklahoma's Kur Kuath (52) and Brady Manek (35) during the second half of an NCAA college basketball game in Norman, Okla., Tuesday, Jan. 14, 2020. (AP Photo/Garett Fisbeck) by Associated Press

Norman, Okla. — Grades for five aspects of the Kansas basketball team’s 66-52 win over Oklahoma on Tuesday at Lloyd Noble Center.

• As KU, in the second half, got better used to playing without injured point guard Devon Dotson, the offense started to become a little more effective.

The Jayhawks shot 50% from the floor after halftime, and got a significant boost from its 3-point shooting, with Isaiah Moss contributing 4 of KU’s 6 made 3’s in the second half.

• Kansas also got back to its paint dominating ways after being outplayed inside in a loss to Baylor. The Jayhawks destroyed OU inside, with a 32-10 advantage in points in the paint.

• Scoring 66 points in the Big 12 this year is actually beginning to look like a relatively decent result, and KU did this on the road while playing without its starting point guard.

• Again, playing without a key perimeter defender in Dotson, KU held the Sooners to 52 points and 30.6% shooting on their home court.

• The Sooners couldn’t score inside, making just 1 of 8 layup and dunk attempts, and missing four other shot attempts in the paint.

• Udoka Azbuike came through with one of his most complete games, overwhelming the Sooners on both ends.

The 7-foot senior put up a 16-point, 14-rebound double-double, was credited with 3 blocks and controlled the paint.

• David McCormack played only 15 minutes in his typical staring role, finishing with 4 points and 3 rebounds.

• Despite the loss of Dotson, Marcus Garrett proved he can take on the lead guard duties for even longer stretches than usual.

Garrett did his defensive thing, as usual, but also embraced the chance to be the primary ball handler and driver from the perimeter. Garrett shot 5-for-12, scored 15 points, hit a key 3-pointer in the second half, and added 5 assists and 5 rebounds in 38 minutes, with just 1 turnover.

• Moss was the catch-and-shoot weapon KU needed him to be, as he occupied the starting spot left vacant by Dotson.

Moss knocked down 6 of 11 3-pointers and even passed up some more looks from beyond the arc. The Jayhawks desperately needed some scoring with Dotson gone, and Moss came through with 20.

• Ochai Agbaji got more effective offensively in the second half, and put in the work defensively KU had to get out of him. Agbaji finished with 7 points on 3-for-11 shooting, with 5 boards and 3 assists.

• KU only scored 4 bench points, but freshman Christian Braun kept the team afloat even if he wasn’t scoring (2 points on 0-for-3 shooting). That’s because his effort and rebounding (6) help KU maintain a level of competency.

• Tristan Enaruna looked more assertive and comfortable than usual in the second half.

Enaruna needs to step up helping us in offense. He needs to stop driving from the middle lane to the side - he's excellent finishing a drive through the middle directly. Bigs need to clear the lane. Tristan needs to utilize those long arms of his to just dunk the rim like he's done it during HS. He's so used to Euro-step before coming to KU but I cant' recall when the last time seeing him with that move to the basket since start of season. Also, he's pretty good pull-up jumper. He hasn't done many of those. Look at how many shots he attempted in each game. Too little.

BTW, giving up 8 offensive rebounds does not deserve an A-, IMHO.