Mobile Udoka Azubuike taking his defense to another level as senior 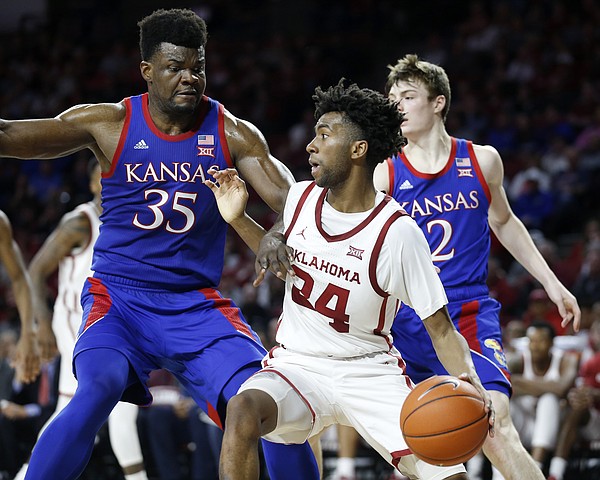 Oklahoma's Jamal Bieniemy (24) is defended by Kansas' Udoka Azubuike (35) and Christian Braun (2) during the second half of an NCAA college basketball game in Norman, Okla., Tuesday, Jan. 14, 2020. (AP Photo/Garett Fisbeck) by Associated Press

Norman, Okla. — Anyone who has watched Udoka Azubuike play knows he can score over the top of defenders when opponents allow him to catch the ball inside and don’t quickly and aggressively double team the big man.

His 16 points on 7-for-10 shooting in the Jayhawks’ road win at Oklahoma? That’s nothing new. When Azubuike’s healthy, this type of performance against that type of defense has been the norm since he emerged as a low-post force as a sophomore.

The defense being played by the Kansas basketball team’s starting center this year, though, is revelatory. It was Azubuike’s exertion on that end of the floor at OU that made winning without Devon Dotson manageable.

The 7-footer’s defensive success in a 66-52 victory had Bill Self gushing.

“I think Dok’s the best defensive big around. I don’t know of anybody who can move his feet like that, who’s 6-foot-11, 270 pounds and played (33 minutes),” Self marveled.

KU’s head coach never would have been able to effuse in such a way about Azubuike in past seasons. Conversations about the center’s defensive footwork actually headed the opposite direction more often than not.

To earn Self’s praise is no small feat. It took Azubuike being much more than a large defender lurking around the rim as an intimidator to pull that off.

Oklahoma’s starting bigs aren’t cast from the same offensive mold as Azubuike. The Sooners, as Self put it, “flip the court” by often getting the ball to 6-foot-7 Kristian Doolittle and 6-9 Brady Manek on the perimeter. Earlier in Azubuike’s career, Self didn’t totally trust his center to defend bigs with those kinds of skills. As a senior, Azubuike is proving those days are gone.

“They played to the matchup of Doolittle and Dok,” Self pointed out of the Sooners’ strategy, “and I thought Dok was fabulous.”

Doolittle shot 5-for-18 versus KU, missing eight jumpers and going 2-for-7 on 3-pointers.

Azubuike’s defensive endeavors didn’t end there. At one point, 6-1 OU guard De’Vion Harmon caught the 7-footer on a switch, but couldn’t get past KU’s invigorated big man.

The senior from Nigeria said afterward he knew coming into the game the Sooners would try to isolate him and play to matchups on the perimeter that might challenge him.

“I’ve always got confidence in my feet. I really can move my feet and I know they’re going to do that,” Azubuike said, before hinting he viewed OU’s game plan as a slight. “If you say I can’t do something I’m really good at proving you wrong.”

His reliance on his defensive mobility has reached an all-time high lately.

“I think I showed that today,” Azubuike said.

Of course, the most menacing defender in a KU uniform also helped KU control the paint at OU, with his 14 rebounds and three blocked shots. The Sooners went 1-for-8 on layups and dunk attempts, with misses at the rim coming from Jalen Hill, Harmon, Manek (three) and Austin Reaves.

Azubuike swatted away a Manek layup attempt, a Reaves jumper outside of the paint and a Harmon layup to end the first half. And his presence influenced many other shots and would-be drives.

The No. 6 Jayhawks (13-3 overall, 3-1 Big 12) dominated OU inside, outscoring the Sooners, 32-10 in the paint, and won the rebound battle, 46-32. It’s a team game, and Azubuike isn’t the only Jayhawk responsible for those numbers, but he’s the majority stakeholder.

Think back two years to when KU tried to stop bigs who could shoot — Villanova at the Final Four comes to mind — and knew Azubuike couldn’t hold up on that end of the floor. You never would have heard these words come out of Self’s mouth regarding the center’s defense.

“That’s impressive what he did, physically,” Self said.

I liked his dominance without it we struggle and may lose. The last post player like that either Joel or Jeff.

That was one of the best defensive performances by a big that I've seen in a long time. The announcers kept praising Dok's defense, and with good reason.

He used to swat the ball hard, but he seems to do it more effectively now. Any words on his wrist? I hope he didn't injure it again. That looked scary.

Dok was so focused on defending the perimeter that he forced a couple of those switches himself. He stood his ground and, with his size, effectively blocked his own teammates from sliding past him to pick up their man. The picture accompanying this article is a good example of one of those times.